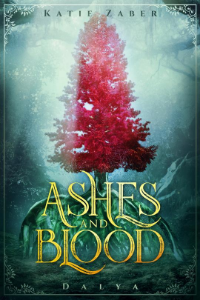 Tagline: Trapped in another world—what would you do?

“I’ll start at the beginning. Long ago, before roads, before we built structures, before medicine was discovered, before the government was created, before man gained any knowledge, there were The Five. Independent from each other, The Five had a mutual respect for one another. They knew their roles in the world and their duty. They were gods…”

An adventure begins when an otherworldly tree captures the attention of Megan and her friends. The environment morphs around them, transferring them to an exotic planet. Stuck in a rural town still maimed by the plague, a chance encounter with a familiar face gives Megan and her friends some security during their adjustment period.

While settling into new, promising lives, they are attacked and stalked by planet Dalya’s humanoid inhabitants, who focus on Megan. One dark night, after an epic, magical attack, the Fae King’s knight is sent to fetch Megan. When she wakes up a prisoner, she learns that there is much more to this strange world, and it is oddly more like her own than she ever would have expected.

It gives me chills to stand in front of the forest that morphed in front of my very eyes. I’m hesitant to walk through the tree line and down the path. The last time I walked down a path for leisure was a week ago. We had planned a picnic. Something simple, always easy to organize and do. It wasn’t hard planning our walk to Brynjar’s cabin today. What could go wrong?
I try hard not to think of all the possible outcomes—from returning to Earth to traveling to a completely new world.
Sarah and Dana were able to walk by without stopping to take notice or reflect. Ciara paused for a moment and then smiled gleefully, saying she had a good feeling.
I don’t. I feel dizzy, angry, and like I need to vomit. I don’t want to do this. I don’t want to go into the woods that changed my life, I don’t want to meet Brynjar, and I don’t want to go back where it all started.
I don’t. 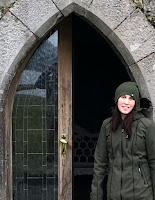 Katie Zaber knows the best way to decide who is cooking dinner is with a Nerf gun fight in the living room. Her boyfriend is an exceptional cook. When she isn’t baking, going to wine tastings, or reading, she’s busy planning her next trip to Six Flags Great Adventure or Long Beach Island, New Jersey. As a child, her mother would read stories about Atlantis and other fictional places that she dreamed of exploring, fueling her love of history, adventure, and fantasy. After spending her days working in a coffee shop, she moved up the ladder getting an office job where she unfortunately was involved in a filing accident. Unable to move, bored out of her mind, and desperate for entertainment, she turned to her imagination and began writing. These days, she finds herself captivated by her many projects and enjoys quiet nights at home. 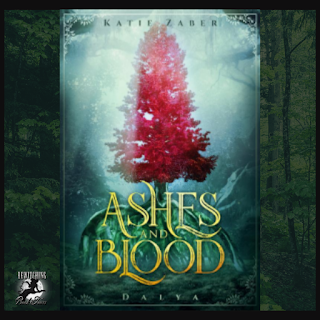 “I’ve lost him. And I love him still.” Her voice broke at the realization.

Her mother shushed her, pulling her into an embrace. “I know, darling. I know you

do. But there is nothing for it now. You will have to return with us to Dunsleigh.”

Isolde thought of all she had lost, not just Merrick, but her future, their plans.

Their trip away to the Continent, Paris, Rome, and all the delightful places in between

that they were going to visit, crumbled in her chest like her heart. “He’s really going to

marry her, isn’t he?” Even saying such a thing sounded absurd, and yet it was the truth.

The truth as she would know it from tonight onward.

darling. You did not deserve this.”

their meddling questions. Her body hiccupped for breath; her eyes, so swollen and sore,

hurt when she blinked.

“Come, you must sleep.” Her mother helped her stand, and Isolde didn’t fight her

decree. Tiredness would succeed over her mind and, for a sweet moment, she’d forget

what had transpired this night. It was enough to make her lie down and try.

She settled under the blankets. The maid knocked on the door and her mother

ushered her into the room, taking possession of the glass of whisky and a cold compress.

Isolde downed the drink in one gulp, grateful for the burning amber liquid and the

cooling cloth against her eyes.

around her, pulling her close and holding her as if to never let her go. Not since she was a

child had her mother acted in such a way, and some of the despair left her, knowing she

had the support of her family.

She would need them in the months to come.

She took a shuddering breath. How could a night once filled with so much

excitement and anticipation twist into such despair and horror? Rolling onto her side, the

ring Merrick had given her pressed into her cheek.

She held out her hand and looked at the cluster of five round diamonds, each of

leaflike pattern. The ring had been Merrick’s grandmother’s, and it had been the most

beautiful gift Isolde had ever received.

But no longer. Now it represented a fractured circle of trust, pulled apart and

She yanked it off, unable to throw it no matter how much she longed to. She

reached over and placed it on the cabinet beside her bed, looking at it as it twinkled

prettily under the candlelight. The ring and its beauty were as fickle as its owner. 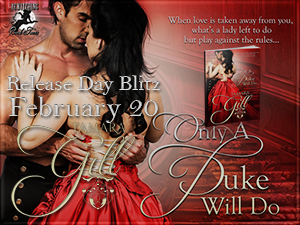 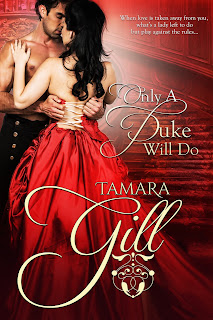 Only a Duke Will Do
To Marry a Rogue Series
Book Two
Tamara Gill
Genre: Regency Historical Romance
Publisher: Entangled – Select Historical
Date of Publication: February 20, 2017
Number of pages: 300+
Word Count: 80,000
Cover Artist: Erin Dameron-Hill
Book Description:
Without a Season, Lady Isolde Worthingham captured the Duke of Moore’s heart at a country dance. But on the eve of her wedding, a scandal that rocked the ton and sent her fleeing to Scotland alone and unwed, leaves her perfectly planned future in a tangle of disgrace and heartbreak.
Merrick Mountshaw, the Duke of Moore loathes the pitiful existence he hides from the ton. With a scandalous wife he never wanted, who flaunts her many indiscretions, life is a never-ending parade of hell. When the one woman he loved and lost returns to London, he knows he can no longer live without her.
But vows and past hurts are not easily forgotten. Love may not win against the ton when a too proper Lord and Lady play by the rules.
About the Author:
Tamara is an Australian author who grew up in an old mining town in country South Australia, where her love of history was founded. So much so, she made her darling husband travel to the UK for their honeymoon, where she dragged him from one historical monument and castle to another. A mother of three, her two little gentleman in the making, a future lady (she hopes) and a part-time job keep her busy in the real world, but whenever she gets a moment’s peace she loves to write romance novels in an array of genres, including regency, medieval and time travel.
Visit Tamara’s website at http://tamaragill.com/
Join Tamara’s Newsletter at http://bit.ly/188eyFF
Friend Tamara on Facebook http://on.fb.me/1Fu0JPL
Follow Tamara on Twitter http://bit.ly/1Y3B4Vr
Join Tamara’s Street Team http://on.fb.me/1FIlG6J
Review Tamara’s books on Goodreads https://www.goodreads.com/TamaraGill

center. “Are you really going over there? I can’t believe they’re going to continue

“So you heard about the murder?”

“Yeah. Skylar told me last night when she got home. It’s awful.”

“Yes, but you know how it is. The show must go on! Surely you can’t be

that surprised.” I was only beginning to understand the importance of these

competitions to their participants, and I could picture pageant moms dragging their

glitzed-up toddlers over the dead bodies of fallen competitors. The way zombies

climbed over each other to get to the top of the pile in movies—only prettier.

“Are they sure it was a murder? She didn’t just have a heart attack or

something?” I could hear the anxiety creeping into Mads’ voice, and I didn’t blame

her. Our little town was supposed to be safe. Murders didn’t happen here. That was

the sort of thing that happened in the city across the bridge, not in our sleepy little

“That’s what they said, Mads, but I don’t think you need to worry. If it was a

murder, you can bet it was personal. Certainly not the doin’s of a mad man or a

serial killer. If Heather Morgan was murdered, it was by somebody who knew her

and had something to gain from her death. This was no a random act of violence.” 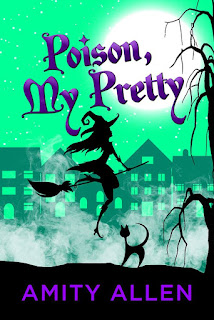 Poison My Pretty
Amity Allen
Genre: Paranormal Cozy Mystery
Date of Publication: February 15, 2017
ASIN: B01MYNTAE8
Word Count: 50,000
Cover Artist: Rachel Olson at No Sweat Graphics
Book Description:
As soon as Poppy Parker turns 21, the star of a popular TV show about witch detectives discovers she has supernatural powers off the set as well as on. When the show is canceled, she returns home to figure out how to harness the magic brewing inside her.
Freaked out by these recent paranormal gifts, Poppy just wants to fit in, so when she’s asked to serve as a judge for the annual Bloomin’ Belles youth beauty competition she readily agrees.
But when the pageant’s snooty director drops dead and Poppy’s friend is arrested,
the former TV sleuth sets out to uncover the real killer, only to find…
the business of beauty can be deadly.
Amazon
About the Author:
Amity grew up reading every mystery she could get her hands on, burning through everything by Agatha Christie in record time and wanting to be Nancy Drew when she grew up. After writing books in other genres for the past few years, she’s finally come home to her true love – cozy mysteries.
Amity and her husband live in L.A. (lower Alabama) with a houseful of teenagers and a half dozen pets. Besides books, Amity’s favorite things are football, needlepoint, fried shrimp, and sweet tea.
Twitter: http://www.twitter.com/Amity_Allen
Facebook: http://www.facebook.com/AmityAllen
Goodreads: https://www.goodreads.com/author/show/16080362.Amity_Allen
Sign up for Amity’s Book Club: http://eepurl.com/coqgxX
Text MYSTERY to 24587 for new release alerts.

Viagra legally and safely cialis malaysia where to buy, you can count on affordable pricing with zero hidden fees and 100% transparency into our legal process. helpful than ever before. The effectivity of Viagra, or how long Viagra will last for viagra pillen kopen