In Lauren Layne’s sizzling Sex, Love & Stiletto series, New York’s hottest “sexpert” has been living a lie—and it’s up to one man to keep her honest . . . all night long. Riley McKenna knows sex—good sex, bad sex, kinky sex. Her articles in Stiletto magazine are the publication’s most scandalous—and the most read. But when Stiletto’s fiftieth anniversary issue requires her column to get a lot more personal, Riley is forced to confront a long-hidden secret: Her own sexual experience is limited to one awkward college encounter. Now Riley is about to call in the favor of a lifetime from the one man who’s always held her heart. Sam Compton knows two things about Riley McKenna: She’s the only woman for him. But as his best friend’s little sister, she’s also completely off-limits. Sam shouldn’t even consider her proposition: to have a one-night stand in the name of research. But the thought of another man putting his hands on Riley is more than Sam can handle, and soon he’s agreeing to one night with New York’s resident sexpot. But Riley’s full of surprises, and what starts as “one time only” soon becomes “just one more time.” And then one more. And before they know it, Riley and Sam learn firsthand that when it comes to love, there’s no such thing as just one night.

Likes:  I was drawn into checking out Just One Night out because it was a different take on romance.  One would think that Riley McKenna knows all about sex but you quickly realize that she might know a lot but none of it is from personal experience.  She is faced with having to writing an article from her own point of view rather that doing research and talking with experts.  I liked this approach and the characters in the story.  Both the male and female characters are strong and untrusting of themselves.  I like that it was written from both points of view and that there is strong character development as the story progressed.

Dislikes: For me it was just that it felt like it was repetitive almost as though the length of story was the goal rather than the plot development.   I think that was the biggest issue for me with the story.

Two people stranded on an island struggle to survive—and slowly fall in love—in the runaway New York Timesbestseller, now available with a reading group guide and a letter from the author

Anna Emerson is a thirty-year-old English teacher desperately in need of adventure. Worn down by the cold Chicago winters and a relationship that’s going nowhere, she jumps at the chance to spend the summer on a tropical island tutoring sixteen-year-old T.J.

T.J. Callahan has no desire to go anywhere. His cancer is in remission and he wants to get back to his normal life. But his parents are insisting he spend the summer in the Maldives catching up on all the school he missed last year.

Anna and T.J. board a private plane headed to the Callahan’s summer home, and as they fly over the Maldives’ twelve hundred islands, the unthinkable happens. Their plane crashes in shark-infested waters. They make it to shore, but soon discover that they’re stranded on an uninhabited island.

At first, their only thought is survival. But as the days turn to weeks, and then months, the castaways encounter plenty of other obstacles, including violent tropical storms, the many dangers lurking in the sea, and the possibility that T.J.’s cancer could return. As T.J. celebrates yet another birthday on the island, Anna begins to wonder if the biggest challenge of all might be living with a boy who is gradually becoming a man.

I was a bit skeptical about On the Island when I first read the blurb.  I was really just not sure that I was going to be able to connect with the characters, I mean a 30 year old woman and a 16 year old boy, it just felt very unlikely.  So I was very surprised when it captured my attention and I didn’t want to put the book down.  It starts with Anna, a tutor, leaving with her pupil, T.J., headed to a foreign island for the summer.  T.J. is recovering from cancer was was behind in school so his parents hire Anna to help get him caught up over the summer. The trip to meet the family keeps being delayed and they catch a seaplane that is not originally on the plan just to get there after more than 24 hours of travel.  Their pilot suffers a heart attack and they crash into the ocean.  After a very dramatic scene of survival, they find themselves alone on a island with nothing.  Some of their belongs wash up on short but after one plane flies over there is nothing.  The story of their life on the island is outstanding.  The writing is believable and powerful.  It takes a while before the romance starts between them and it starts in a very believable way and grows from there.  There is some problems with the timeline as to how long they are actually on the island but by my count it is about three and a half year.  You can only imagine how hard it would be to survive that long and the hope that you would lose along the way.  I was left wondering how or when they would be discovered and it was in a way that I never expected.  I was so surprised but that is for you to find out when you pick this book up.  Once they are rescued and go back home they both say they will stay together but life is not that easy.  There is a lot of press and Anna takes a lot of press for her relationship with T.J.  For a while this separates them but there has to be a chance that love will prevail.

As a debut book, this was much better than what I have come to expect from first time authors.  I know that Tracey Garvis Graves went through a lot to get her book in print to learn more check out her story. 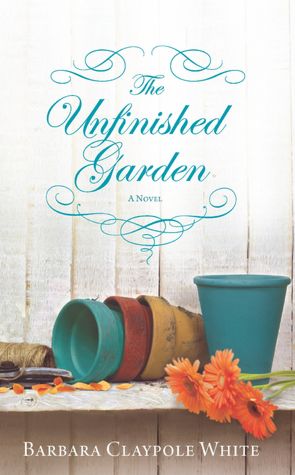 James Nealy is haunted by irrational fears and inescapable compulsions. A successful software developer, he’s thrown himself into a new goal—to finally conquer the noise in his mind. And he has a plan. He’ll confront his darkest fears and build something beautiful: a garden. When he meets Tilly Silverberg, he knows she holds the keyeven if she doesn’t think so.

After her husband’s death, gardening became Tilly’s livelihood and her salvation. Her thriving North Carolina business and her young son, Isaac, are the excuses she needs to hide from the world. So when oddly attractive, incredibly tenacious James demands that she take him on as a client, her answer is a flat no.

When a family emergency lures Tilly back to England, she’s secretly glad. With Isaac in tow, she retreats to her childhood village, which has always stayed obligingly the same. Until now. Her best friend is keeping secrets. Her mother is plotting. Her first love is unexpectedly, temptingly available. And then James appears on her doorstep.

Away from home, James and Tilly forge an unlikely bond, tenuous at first but taking root every day. And as they work to build a garden together, something begins to blossom between them—despite all the reasons against it.

I am not sure if it was the beauiful cover or the interesting blurb that first grabbed my attention for The Unfinished Garden.  Typically, I would say that I am not drawn to books in this genre.  If I read “romance” books they are typically a part of a series that I have been reading for years and very rarely a stand alone story.  There was just something that grabbed my attention and I am glad that it did.

I found The Unfinished Garden to be emotional on many different levels.  The story opens with Tilly, who has recently become a widow, and her son, Issac, getting by in their lives after the dramatic changes.  Tilly has turned to gardening, something that is keeping her sane.  She is surprised when a stranger, James as we will learn, shows up at her home and basically demands that she design his garden.  This is something that Tilly just does not do and flat out refuses the business.  What Tilly does not expect is James to continue to force the issues, it seems that he will just not take no for an answer.

Unexpectedly, Tilly’s mother falls and hurts herself.  Tilly and Issac take off for England and where she grew up to take care of her mother.  The ever persistant James calls her there again demanding that she take him on as a client.  Tilly doesn’t know what else to do but tell him that she will think about it.  When Tilly does not follow through with her promise James shows up in Englad and turns life upside down.  There is tension between James and her old friends, something that she did not expect.    She comes up with the plan that she will teach James how to garden using her oldest friend’s mother’s garden.  It isn’t long before Tilly figures out that James has OCD, which adds to this adventure.  James ends up being the rock that Tilly needs through some health issues.  And James has completely fallen for Tilly causing issues all over the place.  While all of this is happening, Tilly’s mother announces that she will be selling Tilly’s childhood home. And the drama continues.

I enjoyed the depth of this story, it was so real.  At first, I was thinking there is no way that all of these things could be happening in just one woman’s life but the further the story line developed the more real it became.  I was drawn in and just could not put the book down.  The book was much deeper and emotional that I thought it would be and I figured that it would be high emotion thoughout.  Barbara Clayp0le White has a way with creating characters and storylines that at first seem so unreal but as it move on just spring to life and you wonder what you were thinking.

I love that I was able to connect with Tilly so easily.  She had such deep rooted pain and watching he blossom and change throughout the story was a pleasure.  While, we did not get to know Issac all that well, his impact on Tilly was paramount.  I cannot imagine Tilly without Issac and the life she has built for them.  James and his OCD had me drawn in.  I feel as though I knew very little about OCD prior to reading this story.  Let me clairfy, I knew what it was but I did not undestand how it effected people.  This description gave me a much stronger understanding.  I think that I have been miselad by some of the other media I have encountered about OCD.  This was a very real and raw exposure and one that I am glad that I got.

Expect tears when reading this story, it will tug at your heartstrings.