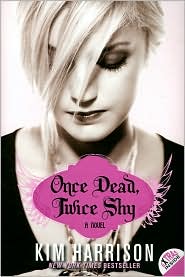 My name is Madison Avery, and I’m here to tell you that there’s more out there than you can see, hear, or touch. Because I’m there. Seeing it. Touching it. Living it.

Madison’s prom was killer—literally. Now, thanks to a mysterious amulet, she’s stuck on Earth: dead but not gone. She has no idea why the dark reaper who did her in was after her, but she’s not about to just sit around and let fate take its course. With a little skilled light-bending, the help of a light reaper (one of the good guys . . . maybe), her cute crush, and oh yeah, her guardian angel, Madison’s ready to take control of her own destiny once and for all, before it takes control of her.

Well, if she believed in that stuff.

First, I am going to say that I am a huge fan of Kim Harrison’s Hollow Series but until recently I had missed that she had a YA series.  How?  I really don’t know but when I was in Lansing for her The Hollow Insider signing in October,  I picked these books up and got them signed.  My hope was that I would enjoy them as much as I do the Hollows.  Luck for me, I really enjoyed this first book.

Madison is a 17 year old who was murdered at her prom by a “dark reaper” named  Kairos, but somehow in the process she stole his amulet which means she saved her soul.  Madison begins to work on a plan to save her body, Karios has hidden, with the help of a “light reaper”, named Barnabas and her guardian angel, that she names Grace.  This pushes Madison outside of her comfort zone , she has always has been content with being an unique being, with bright colored hair and such.  She learns quickly that she is going to have to build trust with these new being if she is going to be able to get her body back.  She is going to have to learn to believe in trust in fate even though she never has.  There appears to be a battle of good and evil.

Kim Harrison does a wonderful job with paranormal and this is much different than any of the adult novels she has written.  It was a quick simple read and seemed like the pages just few by.     I was pleased with the story flow and found the writing to have a similar flow to Harrison’s previous book but just at an age appropriate reading level.  Overall, if you enjoy a semi-light paranormal book, check this one out!

Ava has a secret. She is tired of her ultracool attitude, ultra-radical politics, and ultrablack clothing. She’s ready to try something new—she’s even ready to besomeone new. Someone who fits in, someone with a gorgeous boyfriend, someone who wears pink.

Transferring to Billy Hughes School for Academic Excellence is the perfect chance to try on a new identity. But just in case things don’t work out, Ava is hiding her new interests from her parents, and especially from her old girlfriend.

Secrets have a way of being hard to keep, though, and Ava finds that changing herself is more complicated than changing her wardrobe. Even getting involved in the school musical raises issues she never imagined. As she faces surprising choices and unforeseen consequences, Ava wonders if she will ever figure out who she really wants to be.

Humor, heart, and the joys of drama—on- and offstage—combine in Ava’s delight-fully colorful journey of self-discovery.

Ava is a young girl who is a lesbian, out to her parents who have very relaxed thoughts on this, has decided that maybe she is not who she has created for herself and decides that she is going to transfer to a new school, Billy Hughes School for Academic Excellence.  From the very first day this school is very different, it is harder than she thought it would be and she learns that she will be grading herself.  Ava goes from wearing all black in her previous school to wearing pink in her new school.  This is a huge change.  She is out to make new friends and land herself a boyfriend.  Little does she know that friends can be hiding in the strangest of places, where there are least expected.

There was just a lot going on in Pink.  At times, it was difficult for me to manage the different parts of Ava’s life.  For me, the fact that she was able to keep the two halves secret for so long seemed a bit far fetched for me.  I am sure that it is possible but I just don’t know.

I did enjoy the message of Pink the most.  I think that the book would be very easy for teens to relate to especially those who thought that they were one way and realize that maybe they aren’t or want other things out of relationship, school ect.  I also like that Ava found the “better” friends in a place she never guessed she would out of a very embarrassing situation something that I know every teen can relate to.

So overall, while Pink was not my favorite story, the message is really want made it work for me and why I would recommend this for a teen who is just trying to figure things out.  That is always a tough thing!

* I borrowed this book from the library and all opinions are my own. 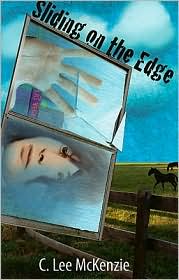 Details: Sliding on the Edge by C. Lee McKenzie

It’s not a heart-grabbing noise like when somebody jiggles the doorknob to see if it’s locked.
It’s not a bitter smell like the electrical short we had last month, when all the breakers popped. No. It’s something in the air, something like a ghost making its way through the room. And it can’t be Monster, not after last night.

Shawna Stone is sixteen going on twenty-five.
Already deeply scarred, she has learned to survive with a tough attitude and a thin blade. Her journey is destined to be short. Sliding on the Edge enters the world of a desperate teen and her disillusioned grandmother, each with secrets that stir mutual distrust. As these two unlikely companions struggle to co-exist we are reminded that the human spirit has the capacity to overcome even the deepest suffering.

Shawna wakes up her in apartment in Las Vegas only to find that her mother has left her alone with a $100, a bus ticket to California, and a phone number of someone her mother claims is her grandmother.  Life has been really hard for Shawna who is always taking care of her mother.  She doesn’t know what to expect but calls the number and meets her grandmother in a town in the middle of no where California where she is expected to do chores with the horses and she doesn’t really fit in.  The monster chases her there too.  Shawna is found to be very smart but her teachers are worried about her stories and depression.

C. Lee McKenzie wrote a wonderful story that I think was very easy to connect to and see what the monster was even though it was never really said.  This made the story stronger in my opinion.  Topic like cutting and depression are very difficult for teens to talk  about or understand and I think this book does a great job at addressing them and ways to get help.

The additional story lines of Kay, the grandmother, who has had many troubled times of her own, from the death of her son to her husband leaving after his death to the challenges of running horse farm on her own with the exception of Kenny.  Kenny had troubles of his own as well when he landed on the farm door step offering help in exchange for a place to stay.   The addition of these charaters and their experiences to the book were invaluable.

My favorite part of this story however was a very minor part and that was Shawna’s adjustment to taking care of the horse and not only that but jumping the fence and really taking care of someone else’s horse that was being neglected.  In my mind, this was her opportunity to take care of something in a way her mother had never done for her.

This story just clicked for me!

*I was provided with a copy of this book from the author.  This in no way affected my views and opinions above.