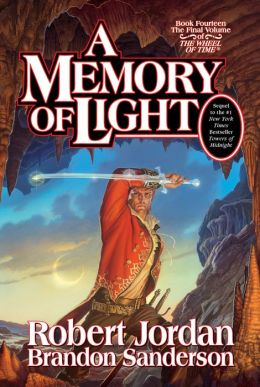 A Memory of Light

by Robert Jordan and Brandon Sanderson

Since 1990, when Robert Jordan’s The Wheel of Time® burst on the world with its first book, The Eye of the World,readers have been anticipating the final scenes of this extraordinary saga, which has sold over forty million copies in over thirty-two languages.

When Robert Jordan died in 2007, all feared that these concluding scenes would never be written. But working from notes and partials left by Jordan, established fantasy writer Brandon Sanderson stepped in to complete the masterwork. With The Gathering Storm (Book 12) and Towers of Midnight (Book 13) behind him, both of which were # 1 New York Times hardcover bestsellers, Sanderson now re-creates the vision that Robert Jordan left behind.

The Wheel of Time turns, and Ages come and pass.

What was, what will be, and what is,

May yet fall under the Shadow.

Let the Dragon ride again on the winds of time.

The Wheel of Time turns and the Age is coming to an end.  The Last Battle is approaching, as the Dark One strives to break free of his prison and conquer humanity.  Only three more seals remain unbroken.  Rand al’Thor, farmboy from the Two Rivers, is the Dragon Reborn, destined to fight the Dark One and break the world.  But has the taint on saidin and the presence of Lews Therin in his mind driven him to madness?  The rulers of the nations have gathered to meet with Rand before the Last Battle, to decide whether to follow his plan or to stop him before he gets them all killed.  Can the Dragon convince his friends and allies before he leaves for Shayol Ghul to confront the Dark One?  The Last Battle is coming.

There are 10,038 pages in the 14 hardcover versions of the Wheel of Time Series.  This book makes every single one worth reading.  At times the reading can be slow, or it can be confusing trying to keep track of all the characters and countries and all the various plot lines.  Those plot lines start to come together towards the end of the series and finally converge in this last volume.  All the various threads get wrapped up and tied off.  The overall tapestry they create is an intricate work of art.

Brandon Sanderson has done a masterful job of finishing the story left behind by Robert Jordan after his passing.  The last three books in the series were written from the notes and scenes Jordan made when he realized he would be unable to finish the novels himself, so the vision is Jordan’s, but it was Sanderson who breathed life into it for the fans to read.

I had A Memory of Light finished the day after it came in the mail, with only a short pause for a few brief hours of sleep.  The reactions of Leigh Butler in the review posted over on tor.com, mirror many of my own while reading.  Ranging from “OMG” to “but…but…but…” to “saw that one coming” to “well, interesting”, this book is sure to put any fan through the emotional gamut.  Some books leave you wondering at the end, or feeling like maybe you missed something somewhere back in book 2, or wondering if there’s going to be another book after this that no one told you about.   A Memory of Light left me feeling satisfied with a story well told and eager to start on rereading the whole series straight through now that I have them all.

If you’re a fan of the series, this book in an obvious must read.  If you haven’t read any of the Wheel of Time books, you’re missing out on an epic masterpiece and I urge you to get started here.

The Wheel of Time turns, and Ages come and pass, leaving memories that become legend.

I didn’t expect any less than a 5 penguin review.

I must say that youve done a amazing job with this kamagra jelly sydney. false order viagra health Certain medicines can alter how long the effects of Viagra will last acheter priligy en france 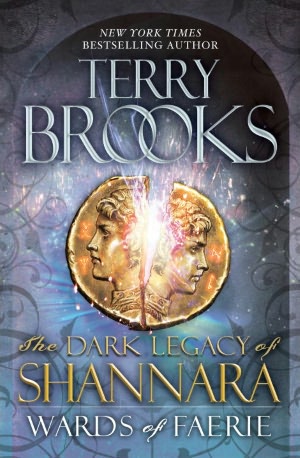 Wards of Faerie: The Dark Legacy of Shannara

Seven years after the conclusion of the High Druid of Shannara trilogy, New York Times bestselling author Terry Brooks at last revisits one of the most popular eras in the legendary epic fantasy series that has spellbound readers for more than three decades.

When the world was young, and its name was Faerie, the power of magic ruled—and the Elfstones warded the race of Elves and their lands, keeping evil at bay. But when an Elven girl fell hopelessly in love with a Darkling boy of the Void, he carried away more than her heart.

Thousands of years later, tumultuous times are upon the world now known as the Four Lands. Users of magic are in conflict with proponents of science. Elves have distanced their society from the other races. The dwindling Druid order and its teachings are threatened with extinction. A sinister politician has used treachery and murder to rise as prime minister of the mighty Federation. Meanwhile, poring through a long-forgotten diary, the young Druid Aphenglow Elessedil has stumbled upon the secret account of an Elven girl’s heartbreak and the shocking truth about the vanished Elfstones. But never has a little knowledge been so very dangerous—as Aphenglow quickly learns when she’s set upon by assassins.

Yet there can be no turning back from the road to which fate has steered her. For whoever captures the Elfstones and their untold powers will surely hold the advantage in the devastating clash to come. But Aphenglow and her allies—Druids, Elves, and humans alike—remember the monstrous history of the Demon War, and they know that the Four Lands will never survive another reign of darkness. But whether they themselves can survive the attempt to stem that tide is another question entirely.

Wards of Faerie by Terry Brooks is the first book in the Dark Legacy of Shannara series.  In this book, Brooks returns to the current timeline of the Four Lands, seven years after the events of the conclusion of the High Druid of Shannara trilogy.  The elven druid Aphenglow, has returned to her homeland in the elven capital of Arborlon to search through the histories stored there in search for information regarding the lost Elfstones.  As granddaughter to the king, she has been given permission to search the histories, but is still looked un with distrust and contempt by the majority of the elves, even her own mother, who no longer trust the druids or those who join the order.  Nearly a year after her search began, Aphenglow finds an ancient diary written by a young girl from the days of faerie.  Almost immediately after her discovery, someone tries to kill her.  Believing her assailants to be after the diary, she returns to Paranor, home of the druids.  News of this discovery causes the High Druid to visit the Hadeshorn to consult with the long dead druid, Allanon.  His shade tells her that the druids must undergo a quest to find what they seek and they must find others to help them, including an Ohmsford.

The current generation of Ohmsfords, Redden and Railing, are twin brothers whose own mother wasn’t always able to tell them apart.  Only Mirai Leah could tell which was which, but she wasn’t saying how she knew.  The boys had both inherited the magic of the Wishsong, and frequently put it to use to keep the family fed and in pursuit of their hobby, building airships.  When Kyber Elessedil, the High Druid, approached the boys, they agreed to join the quest to find the lost Elfstones, with Mirai refusing to be left behind.

Meanwhile, in the human controlled Southlands, a new Prime Minister has been elected.  Drust Chazhul has decided the best way to consolidate his power base is to begin with the destruction of the druid order.

Beset by dangers, will the druid’s quest be ended before it has truly begun?

I must say that I was thrilled to find out that this book returned to what I think of as the main time in the Four Lands.  The last several books released all dealt with the older history of the world and while good stories in themselves, I prefer the time of this book.  When I first started reading Wards of Faerie, it took me a little while remember the events chronologically previous.  And while I would certainly suggest to any reader new to the world of Shannara that they start reading from the beginning with The Sword of Shannara, Brooks provides enough background information in this book that those who prefer to start here won’t be lost.

In reading some of the other reviews for this book, I’ve noticed some fans who have complained that the basic formula of the individual series’ in the Shannara world doesn’t change.  Druid needs an Ohmsford for a quest to save everyone, a Leah tags along, etc.  But to me, that seems to be the whole point to the overall story arc.  Each new generation of Ohmsfords and Leahs knows that, in the past, one of their relations has been a pivotal part on some Druid quest.  Eventually, they seem to reach a point where they are internally measuring themselves against that ancestor.  It’s the choices they must make, to accept the risk to themselves and take the hard road, that eventually wins the day for the druids.  In Wards or Faerie, we are introduced to this new generation of Ohmsfords, Leahs, and Druids as they begin the first part of their quest, so grab a copy and be prepared for a fantastical adventure.