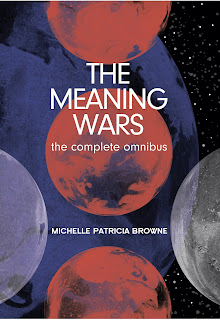 The Meaning Wars Omnibus: A Queer Space Opera
The Meaning Wars
Book Six
Michelle Browne
Genre: Science Fiction, Space Opera
Publisher: Magpie Editing
Date of Publication: Nov 10, 2022
ASIN: B0BHXRZ8NP
Number of pages: 550
Word Count: 237,000
Cover Artist: Kateryna Kyselova
Tagline: Two best friends search the galaxy for love – while an oppressive human government hunts for them.
Book Description:
Two best friends looking for love.
An oppressive interstellar government.
Adulthood has never been so stressful…
For the first time, all five books in The Meaning Wars are united as a complete collection. In this queer space opera featuring a diverse cast, a found family navigates the politics of revolution and freedom.
Join Crystal, a wormhole engineer, and Sarah, an English Literature graduate with a chip on her shoulder, as they try to find romance and friendship – while an oppressive interstellar government watches their every move.
As Crystal deals with her faltering marriage, Sarah makes risky career decisions – by doing what’s morally right. Running from the surveillance state of the Human Conglomerate, will the Interfederation’s multi-species alliance prove their salvation? A crew of old friends and a union of renegade space pirates may be their way out. But first, they have to save rebel icon Patience Ngouabi from arrest and certain torture – and make sure they all get out alive.
Fans of Ruthanna Emrys’ A Half-Built Garden and Becky Chambers’ Wayfarers series will love the cosy yet intense adventures of this crew of misfits fighting for political and social justice.
Amazon

The leaves and trees here were soft shades of blue, ranging all the way to bold indigo. It was a sharp but not unlovely contrast against the pale sky, which looked white or a little yellowish because of the thick, protective atmosphere, shielding them from the insistent blue luminance of the F-class star. They’d seen patches of gold and yellowish plains, and even plenty of familiar Earthly green plants, which grew here quite well, but the native vegetation tended towards navy, periwinkle, and turquoise.

“Good job back there,” said Sarah in a whisper. “I thought you were gonna crack, to be honest.”

“Me too. But I kept thinking, ‘What would Sarah do?’ and I just tried to look bored,” Toby whispered back. He shot her a smile that started a bit wan, but gradually brightened. “Hey, we did it. And now we’re going to rescue someone.”

“Speaking of,” said Paulo, stumping over, “I finally got this shit figured out. Goddamn map was in really poor resolution and didn’t account for this fucking river valley having a flooded area. They sent me archived shit. I just figured out the discrepancies.” He sighed. “Sorry for snapping at both of you. I’m just worried and stressed.”

Sarah inhaled and let out a long breath. “You and me both. It’s not like I’m rescuing someone who’s basically my hero or anything, while caked in mud and preparing to flee for our lives—oh wait, yes I am. This is a nightmare.”

Toby bumped her shoulder and wiggled his feet in his boots, sluicing the mud off. “At least you’re not having this nightmare alone.”

Paulo pointed. “C’mon. Over there. Who knows how long we have before there are guards or a collection force? Those fake identities won’t hold forever.”

A cold pit formed in Sarah’s stomach. What if this was an elaborate trap? She’d seen that letter, sure, but did they know for certain that Patience was still alive? What if the guards had found her already?

“We’re in disguise,” Toby ventured, a tremor in his voice. “Um. Just so you know. That’s why we look like guards. But we’re not.”

There was a rustling. Didn’t sound like anything bigger than a rabbit—if those had even been introduced here.

The two guards circled them both, the person with sideburns keeping their gun trained right at Sarah and Toby’s faces.

“Wait. There’s supposed to be a woman here that Patience talked to,” said the one on the right.

Silently, a third person crept out of a hidey-hole Sarah hadn’t even noticed. Moss and a snarl of brush against the arch of a tree root parted and revealed a rather small woman with dark skin and large, anxious eyes, and a larger gun.

For many reasons, she was one of the most beautiful women Sarah had ever met, known, or heard of. Her skin was perhaps duller and less perfectly even in tone than it looked in interviews, but was still the glorious brown of fresh clay, with a hint of rust.

Still, she had the angelic features Sarah had seen in so many interviews: that heart-shaped face, broad, gentle nose, soft cheekbones, and full, plush lips. Her wide, dark eyes searched Sarah’s face in momentary confusion.

She had really been hoping to meet Patience under different circumstances—not while going by a dead woman’s name. If she took Patience’s hand, she thought, Patience would be touching the skin of a dead woman, not Sarah’s.

“I’m afraid we’ll have to do the formal introduction later. There are soldiers on the way!” said Patience, without much of her name. 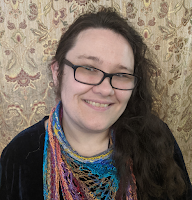 About the Author:
Michelle Browne is a sci fi/fantasy writer. She lives in Lethbridge, AB with her partners-in-crime and their cats. Her days revolve around freelance editing, knitting, jewelry, and nightmares, as well as social justice issues. She is currently working on the next books in her series, other people’s manuscripts, and drinking as much tea as humanly possible.
Blog: www.scifimagpie.blogspot.ca
Facebook: www.facebook.com/scifimagpie
Twitter: www.twitter.com/scifimagpie
Instagram: www.instagram.com/scifimagpie
Tiktok: www.tiktok.com/@scifimagpie
Amazon: https://www.amazon.com/~/e/B00BGWZRCW
Mailing List: https://mailchi.mp/87fd9fb37a5e/scifimagpie
Goodreads: https://www.goodreads.com/author/show/3301336.Michelle_Browne 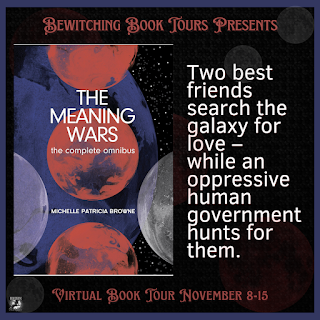 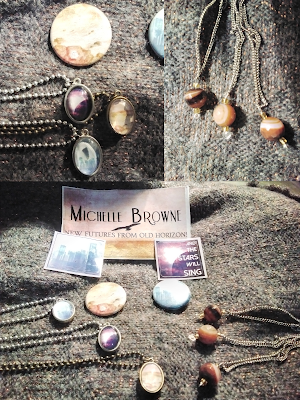