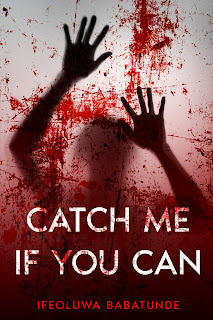 Catch Me If You Can
Ifeoluwa Babatunde
Genre: Psychological Thriller
Date of Publication: April 26, 2022
ISBN: 9798819411285
ASIN: B0B188N1RP
Number of pages: 253
Word Count: 40,000
Book Description:
Catch Me If You Can is a unique and thrilling suspense novella that tackles themes of mental illness and murder. When the shy and quiet Nigerian American student Victoria stumbles into Eli at school, a friendship begins to blossom that pierces her loneliness and quiets the mental illness that lurks just beneath her awareness. But when she uncovers a shocking secret about Eli, it forces her into an impossible choice that will change her life forever.
Roped into a morbid pact to unleash their destructive urges and bring death to innocent victims, Victoria spirals into a twisted cycle of murder and mayhem. With Eli by her side, the pair feel unstoppable. But their actions can’t go unnoticed for long, and as the Law begins to close in on their trail, Victoria grows increasingly unstable. Her mental state teeters on the brink – and it will only take one small push to tip her over the edge.
Perfect for anybody who loves thought-provoking suspense novellas that are filled with twists and turns, Catch Me If You Can is an imaginative read that will satisfy morbid curiosities and leave you with something to ponder.
Book Trailer: https://youtu.be/Dm7L1UgBcfw
Amazon

There is a vivid boundary that distinguishes the normal from abnormal, and the typical from atypical. If the setup is altered and the circumstances become unusual; often then, the behaviors cease to belong to the category of normal. Fascinatingly, the world of abnormal is less exposed, but once it lays bare in front of the human brain, there is no possible escape to the normal world.

It is mostly believed, that things that are avoided for a longer time soon suffer the fate of becoming rotten and useless. Similarly, the human brain is that vital organ of the body that stays in the normal world only if it is given constant social interaction. It gets upset if not given the optimum condition to thrive in. Once it is obstructed in creating such connections, it goes into a deep recess. Then, after searching to interact with the normal world for a long time, a moment comes when the brain accepts the defeat and then starts cooking up strategies to wrestle with the world that shirked it. The human brain, after a long time’s effort, learns to live on its own and, then, even if the normal world wants to embrace it again, it resists the urge. Rather, it starts living in a different dimension; a dimension that is a miraculous creation of one’s brain; a dimension that cannot be viewed by a normal eye. A dimension that takes refuge in alternatives.

Nevertheless, a human brain is naturally hardwired to interact and develop connections and links with the world in which it lives; these connections are vital for the brain and the heart to develop and maintain feelings for other human beings. To understand such atypical working of the brain, it is imperative to develop a sight that can discover and unveil the unusual. It is because the brain is practically implemented by the eyes. The congruency of the brain and the eyes is key to normal human functioning; the eyes see what the brain wants to see. Likewise, it is very much possible that what the brain instructs the eyes to see is not what a normal brain would normally instruct. Therefore, the perception of the world depends upon the way the brain perceives things.

With the change in perception, the world becomes a different place to live in. Widely, the perception cuts into two halves; the one being the normal perception and the other – the abnormal perception. The owners of each can only see the world that comes along with their insight; understanding the other world is merely a task impossible for each of the clashing views.

A very obvious human psychological notion believes that if a person is impeded on his path to the destination, he resolves to find an alternative path; a path that can make a person feel like he is smoothly going down his way to that destination. Likewise, the human brain, when unable to grow in normal conditions, starts looking for alternate ways and those alternate ways often lead to a different world.

The curtains were drawn tight and not a single ray of light was able to fight its way inside the room. The room was encompassed by darkness with a small fluorescent tube as the only source of light that diffused throughout the whole room. Yet, the sharp light flowing out of the tube was falling directly into the baby’s eyes, making her weep in annoyance. Her small, dark hands and feet were flailing frantically, and her face had gone pulpy red, crying. Some painful minutes slipped past when a lady clad in an all-white suit and black ribbons appeared at the door, looking horrified as ever.

The wailing was now a harsh echo, and the baby was about to lose her breath. Hurrying along into the room, she gently stroked her small curls and inserted a nipple in her mouth. Seeing her flooding eyes, the maid quickly turned off the switch

It was her fourth birthday and her parents had bought her a piano; she was not happy to see it.

The previous year she was gifted a set of children’s books, and she had clearly told her parents to buy her a bicycle the next year. Riding a bicycle was her favorite sport; at least her brain told her so. However, the parents had decided not to heed her request whatsoever. They always told her that she would get sick if she journeyed outside to ride. She was astonished to see other children playing outside, all immune to sickness.

She had cried a lot that day, but her tears never affected her parents and all she could do was take her piano and go back to her room. Entering, she looked at the closed window. She was in thought for a few minutes, dumping the piano in the box that lay under her bed. The box had many such toys; all of which she hated. It was filled with toys that she never played with.

The sun was beaming beautifully that day. The light, fluffy clouds hung low as if they were about to squeeze through the closed window. She was watching the view with her slender fingers curling around the cold windowsill. It was about mid- noon and the kids were all coming out in groups to play. Every day, she used to see them come out and play for hours upon hours until sweat would melt their sprightly vigor. All the children bore the happiest of smiles and at times, they would look up at her, beckoning her to play with them. All she would do was blink away in utmost surprise and then draw the curtains tight. After going straight to her bed, she would take long breaths as her heart would start somersaulting with a wild desire to go outside and play. Thinking for a minute, she would jump out of the bed to seek permission from her parents. But then something in her heart would stop her from going, and she would come back to her room, crying in little hitched breaths.

She was a young girl now, average as the rest; a broad nose perching on her dark face and eyes that had a river of indifference in them. She would always keep her mouth from smiling; she thought she had no reason to smile. Today, she strolled past the closed window and watched boys and girls laughing as they walked outside. A woman jogging past the busy road watched her smiling, and, as usual, after receiving no smile in response, she moved on. Getting such smiles from the people outside was not anything new to her; at first, she would get apprehensive, but now she felt nothing. She would often give people a heart attack by staring blankly at them. Looking outside the window now failed to bolster any kind of desire to move outside. Probably because she had learned to adjust to her routine.

There was a tall mirror that ran down from the top of the gray wall to the full length. Her mother had bought her this mirror when she turned thirteen. It was her favorite thing in the room. At times, she would stand in front of it and stare for hours, until her sight turned dizzy.

In her home, she had just her mom and dad. Most of the time, Mom would be busy in the kitchen and Dad would always be out for work. This meant there was no one else but her mirror which had promised her utmost companionship. Once, her mirror had suffered from a small crack, and she had cried quite a bit. Her father took it to a shop and fortunately, as the crack was in the golden frame bordering the mirror, it was fixed up. She had never been so happy in her life.

The day her mirror came back to her, she made up her mind to protect it with her life. And she had. She had also taken out the presents she once dumped into the box; there was a piano, a set of books, some flowers, plastic figures, and things like that. Her mind had learned to seek the happiness which she had previously thought could only be achieved by going outside, in the things that were in her room. Now, she did not bother to draw away the curtains and look out the closed window. 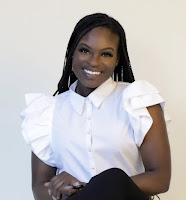 About the Author:
Ifeoluwa Babatunde is a passionate author and dedicated wordsmith who loves to craft gripping stories that force readers to think. As a Senior Data Analyst and college professor by day and a writer by night, Ifeoluwa enjoys nothing more than a good thriller or horror novel, and she hopes to capture her readers’ imaginations with exhilarating books that are intertwined with thought-provoking themes.
A first-generation Nigerian American and current PhD student, she enjoys reading mysteries, psychological thrillers, and all things horror.
Catch Me If You Can is her debut novel.
http://ifeoluwababatunde.com/
https://www.instagram.com/ifeolb/
https://www.facebook.com/babatunde.ifeoluwa.77
https://www.pinterest.com/ifeolba/_created/ 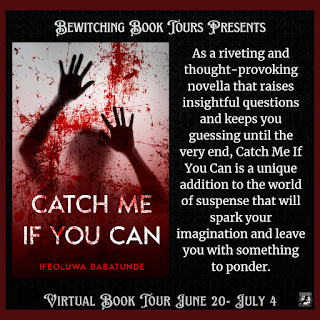