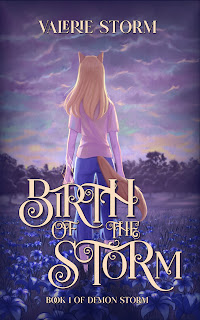 Birth of the Storm
Demon Storm
Book One
Valerie Storm
Genre: YA Fantasy
Publisher: Shadow Spark Publishing
Date of Publication: 6/13/2022
ASIN: B09ZZ9HJPZ
Number of pages: 355
Word Count: 89,417
Cover Artist: @Ginkahederling
Tagline: Do you want vengeance or peace?
Can’t I have both?
Book Description:
A bolt of lightning. And a dream of vengeance.
For wolf-demon Kari, these define her every waking moment. Her parents are dead, slaughtered by human hands, forcing their only daughter to masquerade among their killers to save her own skin.
Now she dwells among them, hiding her lightning-based abilities and plotting a terrible revenge, believing her schemes are all she’s good for now. But when she discovers unexpected solace among a group of humans who look past her monstrous nature, Kari finds herself questioning everything. Her mission. Her dreams. Even the hatred festering in her heart.
Is it possible for a creature like Kari to find happiness in a world that despises her?
Or will the specters of her past force her down the path of vengeance in the end?
Amazon

She could feel her mother’s mind-presence throbbing quietly, brushing the edges of Kari’s consciousness, yet she did not respond. On the other side of the bodies, the man helped the woman to her feet. She smiled at him and brushed herself off. The other two humans who were not yet dead were offering weak cheers at their success. The one with the wounded leg had fallen to the ground, and his weaponless companion was tying white wads of something around the bleeding wound.

Kari’s attention snapped back to her mother. Her breathing was shallow, evidenced by the very weak rise and fall of her chest, as she commanded again: Shift. Now.

Kari didn’t understand. She turned back to her father, forcing herself to look beyond the reddened snow surrounding him. He would get up soon. It was one hit. He’d taken worse swipes from a bear.
KARI.

Her mother’s voice screamed in her mind, before it cut off suddenly, a syllable half-formed. Kari let out a whimpering sob and retreated into the shadows of the cave. She shifted into her humanoid form and came out on all fours as a tiny, cowering, and very naked girl. The cold air chilled her skin, but her demon blood kept her comfortable. Her wolfish tail was small, barely more than a stub that flicked uneasily; her miniscule ears, too tiny still to see and only a couple of shades darker than her blonde hair, bent backward.

I did it, Mother! Mother?

Kari’s mind was full of buzzing silence, devoid of any thoughts except her own.

From the ground, she lifted her head. Her mother’s eyes remained yellow in death, though blank and lifeless. Kari’s hands shook and her throat burned as something wet invaded her eyes. Tears.

“Poor thing,” she continued to speak. Her eyes trailed down Kari from head to toe, eyes widening at the sight of her bare body. “You must be freezing! What are you doing out here all alone? What’s your name?”

As she pulled off her overcoat, the men approached. The one with the bitten arm supported the limping one.

“What is it, Anne?” the man with the hammer spoke, stopping beside the woman. He froze when he saw Kari, who was flinching away from the woman’s coat. She raised her gaze to his face.

He was an older man, his face lined with wrinkles, and his short, russet hair laced with gray. He looked weak, Kari thought blankly. How could he have beaten her father? She glared at the hammer in his hand.

It is because of their cowardly use of weapons, either to outrange or out-brute demons. They have no real strength of their own.

Distracted, she allowed the woman—Anne—to place her coat over her thin shoulders. Warmth enveloped her, and so did a repulsive human smell.

“It’s true, there really was a girl out here?” the man with the hammer muttered to himself. To the woman, he said, “She’s in shock. Come on. We can take her home and see if she recovers from whatever’s happened to her out here.”

“We’d best hurry. We have to drag Billy’s body down with us, too,” the limping man said.

“Yar, I’d hate to leave him up here,” the one supporting him muttered.

Kari’s angry thoughts were tangible, choking her, but she swallowed them back. She wouldn’t have a chance of surviving a fight with all of them. Her mother had wanted her to change forms—why? Her fingers twitched and she tried to keep her eyes and thoughts away from her parents. Their blood would paint the snow. Kari clenched her trembling fingers into fists.

“Will you come with us?” the woman asked, reaching out for Kari’s hand. Her eyes were soft bark, her face framed by waves of similar colored hair.

They thought she was human, one of them—that was the only reason Kari was still alive. Her wolfish ears were so tiny, hidden away in her locks of golden hair, so these idiotic humans did not yet suspect that she was anything other than one of them. Even her tail was too small yet to draw attention.

That was why; her mother had wanted Kari to blend in with them. Her mind screamed, wild and scrambled with panic; how safe could she be with the humans that had killed her parents?
Kari’s anger was quickly fading into a deadened feeling, her stomach empty and fluttering with unease.

Mother and Father are… she couldn’t complete the thought. Her body trembled, and every breath took energy she didn’t have. She wanted to slump into the snow and freeze to death.

“Perhaps we’d better leave her, Anne,” the man with the hammer mumbled, gently caressing the woman’s shoulder. “She’s mad. And I’m surprised she’s not bitten by the frost. No matter how long she’s been out here, she should be dead.”

The woman clicked her tongue angrily. “How dare you! Abandon a child out here to this horrid weather? No! Why else would we have come all the way up here, and Billy have given up his life?”

The man with the hurt arm grinned. “At least we got some good furs for it.”

Kari stiffened beside the woman.

“Ah, don’t say that,” the man with the hammer murmured. “Billy was a good man.”

Anne shot them a glare before turning back to Kari. She reached forward and gently laid her fingers on the back of Kari’s hand. Her skin crawled from the touch and her focus slowly returned.

“Your nails are so long,” the woman murmured.

Yes. Long and strong enough to rend flesh, at least. Kari could slice her throat with them.

Yet her mother ordered her to shift so that they would not kill her. Kari must remain alive, if only for the sake of her mother’s last command. She jerked her hand away from the woman.

The man with the limp made a noise of dissent. Anne ignored him. “Kari is your name? You poor thing. Are you alone?”

“Come, Kari. My name’s Anne. We’ll get you home and fed and warmed up. How does that sound?”

Kari allowed the woman to tighten the coat around her body but bared her teeth again when the woman bent to pick her up. Looking concerned yet determined, the woman instead gestured for her to follow.

Kari’s humanoid feet crunched in the snow, the sludgy frost seeping between her toes. The woman looked back at her intermittently, her face soft with compassion. Kari’s jaw tightened so much it ached.

I will kill them, Mother, she whispered in her mind, though the soundless void was enough to make her breath hitch. I will kill them for you and Father.

About the Author:
Valerie Storm was raised in Tucson, Arizona. Growing up, she fell in love with everything fantasy. When she wasn’t playing video games, she was writing. By age ten, she began to write her own stories as a way to escape reality. When these stories became a full-length series, she considered the path to sharing with other children and children-at-heart looking for a place to call home.
https://linktr.ee/ValerieStorm
https://twitter.com/Valerie_Storm
https://rantsofawriter.home.blog/
https://shadowsparkpub.com/valerie-storm
https://mailchi.mp/eb98b5dafb22/valerie-storm
https://facebook.com/Valerie-Storm-103490952291105/ 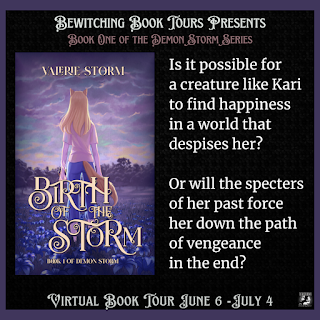