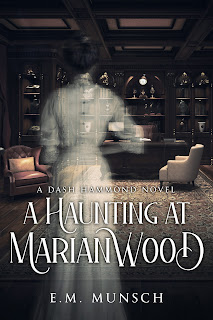 A Haunting at Marianwood
Dash Hammond
Book Six
E.M. Munsch
Genre: Mystery
Publisher: Mystery and Horror, LLC
Date of Publication: October 18, 2022
ASIN: ‎B0BJ4GYGD2
ISBN-10: ‎1949281213
ISBN-13: ‎978-1949281217
Print length: ‎217 pages
Book Description:
Life is good for Dash Hammond. He’s recently remarried his childhood sweetheart, Dr. Maevis Summers, and together they’re raising his four-year-old son, T.J. in the Hammond family homestead in Clover Pointe, Ohio. A retired Army colonel, Dash now keeps himself busy fixing everything from a leaky faucet to an unsolved murder.
It is no wonder that his cousin Billy McCafferty calls on Dash for a road trip to Kentucky when  his oldest sister is in trouble. The president of a religious order, Sister Miriam Patrice, Miri Pat to those who knew her before she took the veil, has been hearing things, seeing things and misplacing things. A very competent woman, she refuses to accept an unearthly reason for all this.
Marianwood, the motherhouse of the Sisters of the Blessed Mother of God, is located on an old plantation thought to be haunted by its original inhabitant, Miss Victoria Harris, who is rumored to prowl the grounds and cemetery in search of her murdered beau.
When the Ohio contingent arrives, they discover that things are not as simple as your ordinary haunting.
In a battle of wits, will the victor be supernatural or a very corporal retired Army colonel?
Amazon

Sister Miriam Patrice slid back from the kneeler. The quiet of the church soothed her as it wrapped its velvet cloak of serenity around her. She sat, hands folded, once in prayer but now to stop the trembling. Glancing at the sunlight streaming through the stained-glass windows casting a rainbow on the empty pews, she drew in deep slow breaths. She looked at the watch pinned to her tunic. Time to get back to work. She rose to leave the church, her place of refuge, a place free from the distractions of the running the community and the new retirement home the sisters established to help make ends meet.

The members of the Sisters of the Blessed Mother of God found their numbers dwindling. New recruits, as Sister Miriam Patrice called them mimicking her cousin Dash Hammond’s military jargon, were very rare. The teaching congregation once had more than a hundred sisters. Vocations, callings to either the religious or the educational side of the community, had fallen to less than a handful each year.

As she walked down the aisle to the back of the church, she heard it again. Tap, tap, tap. She stopped to listen, making sure she wasn’t mistaken. That sound sent shivers down her spine. Squaring her shoulders she walked to the doors next to the church exit. One led up to the choir loft, the other down to the cellar. In days past she had gone up the stairs; today she would go down.

Pulling the doorknob, Miriam Patrice met the resistance of a locked door. She pulled out her keys and unlocked it. She struggled with the door, suggesting to her that no one had gone to the cellar in a while.

The stone steps were worn but sturdy. She moved cautiously into the darkness, one hand on the wall to steady her nervous knees, the other searching for the handrail. Her hope was that the security guard forgot to close the door one day and some critter, not two legged, was trapped down here and making the tap, tap, tap sound. Logically she knew this was wrong, but the alternative could be worse.

Decades ago they discovered one of the newer buildings constructed during a period of rapid expansion had been built on an underground spring. It wasn’t long before the building tilted, as did their finances. What a waste of time and money. Fearful that what she would find was a tell-tale pooling or bubbling of water, she moved forward slowly. She said a silent prayer that she would not stumble into a puddle, a precursor of the inevitable unwelcome news.

Her trek seemed unnecessarily slow though reason told Miriam Patrice she should alert one of her sisters where she was just in case she lost her footing. But her reasoning had not been the sharpest of late. She blamed her sleepless nights, not because of an uneasy conscience but an overabundance of concern for her congregation and its uncertain future, both financially and individually.

After spending a half an hour poking into the corners, searching for the origin of the sound, Miriam Patrice gave up. She needed a flashlight if she wanted to do a proper search. Next time she would be prepared. Next time, she told herself, she would be less skittish, more confident that she could deal with whatever sprung up from the tap, tap, tap. After deciding this, she nodded to herself. At least she didn’t hear a drip, drip, drip.

The sound had stopped so she returned to the church. As she locked the door behind her, the tap, tap, tap began again, louder this time. If she permitted herself, she would have said damn. 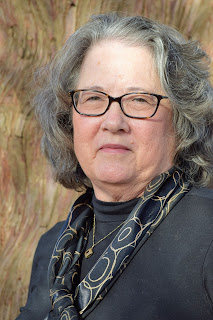 About the Author:
Elaine Munsch is a native of Cleveland, Ohio, but has spent her adult life in Louisville, Kentucky.  She graduated from Nazareth College of Kentucky located outside of Bardstown and attended The Ohio State University for her graduate work. She has been a bookseller for fifty years working in both large and small, chain and independent bookstores. She opened the first Barnes & Noble in Kentucky where she set up a mystery reading group which is still active today. She also taught classes in the mystery genre for the Veritas Society and joined the local chapter of Sisters in Crime.
With Susan Bell, she co-edited MYSTERY WITH A SPLASH OF BOURBON, an anthology of bourbon related stories.
As E.M. Munsch, she writes the Dash Hammond series set on the shores of Lake Erie. The latest title, A HAUNTING AT MARIANWOOD, is set to be released at the end of October.
https://www.amazon.com/E-M-Munsch/e/B0BHTK2HS1
https://www.facebook.com/profile.php?id=100086467416937 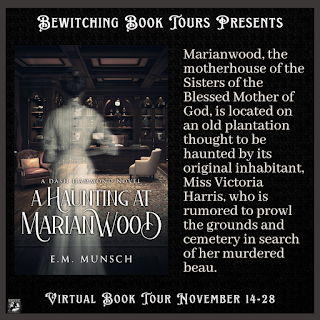