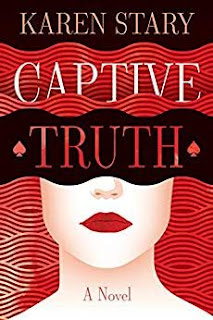 Publisher: Can’t Put it Down Books

A mercenary, a gambler, and a warlord are drawn together for a high stakes poker game. The trophy: a woman, Christine. They are men of unquestionable wealth, indomitable power, and overwhelming guilt; each is enchanted by Christine’s alluring beauty and each relentlessly desires to have her for himself.

Life has left Christine unable to form meaningful emotional relationships. However, without the ability to appeal emotionally to her male captors she is not only jeopardizing her own fate, but also the fate of other women as well. Alone, with only the three men who have come to mean so much to her, Christine must use not only her wits but her compassion to extricate herself.  Will she become one man’s prized possession, or can she regain her sense of self?

Stary’s complex plot keeps the reader guessing as she explores some of today’s most controversial issues for women.
Amazon

He clears his throat again. I look up. His head gives a slight tilt as if to suggest, “Why not?” His eyes squint, inviting me to have faith in the unknown. Charmed by the smile in those eyes, I relax and take a sip of coffee. He speaks. “So…let me, at least, introduce myself…my name is Cameron Dawson…and your name is…?” His pause leaves the question dangling over a precipice of foreboding. I retrieve the answer before I plummet.
“Christine…Christine Ledge.”
“Now, that wasn’t so difficult, was it?”
He seems to know me too well. I cannot release the shadow of familiarity about this Mr. Dawson. I had this same sensation the moment I first pressed against his arm at the concert. I had ignored that feeling because I had thought that I probably would never see him again. But like a relentless itch, it is a thought that aches to be scratched. So, I take a breath and scratch.
“Have we met before?”
“Last night at the concert and then later in the hall!” a bit too quick and a bit too tidy. I am not satisfied.
“No, before last night. I feel that we had met before last night.”
No response. He sips his coffee. I sip my coffee and allow its warmth to appease his evasiveness. Obviously, I had just trespassed over some line. Because there is no need to ruin this moment, I allow his hesitancy to pass. After a moment he stirs in his seat.
“Did you enjoy the concert?” It is obvious that he wants to change the subject. But, I am a female. And his abrupt shifting is troubling. I disconnect from my unfounded hunches.
“Oh, the concert…well…yes…of course, I enjoyed the concert.”
Last night’s images block any coherent reply. Fractured conversations interfere…caressing words serenaded by the music opened wounds as I recall pressing up against him. And so, I stare at him now and think about how it would be to lie naked next to this man, to physically be touched by him. I harangue myself over my intimate urges. I flip my head back trying to shake off the irrational desire. However, I cannot let go of last night’s encounter between this Mr. Dawson and some young man in a questionable financial exchange to obtain the seat next to mine. Suddenly, I am wary of how much I should trust this man seated across from me.
Watching me carefully, he tilts his head as if to pardon any past indiscretions. He seems able to read my misgivings. This veil of deception must dissipate to have more clarity. And for that to happen, I must be more forthright, too.
“No, Mr. Dawson, to be quite frank, I did not enjoy the concert last night. I really struggled to sit through it.” Then to continue this openness, “Was that obvious?”
“I did sense you were a bit uncomfortable.” His polite delivery seems sincere enough.
Trying to inject some humor to lift the heavy tone: “You mean since each time I banged into your arm, you got a new ‘black and blue’?”
“Actually, I rather liked the banging in spite of all those black and blues.”
“You did, did you?” There is a pause; I am more comfortable with this exchange. “I’m really sorry; I didn’t mean to be so abusive.”
“No, no…no apology needed. What I meant by the banging was not because of that… but, yes, because of that, too…More because I found you quite intriguing as you squirmed about like you had hemorrhoids or some serious itch in the seat of your pants.” His humor releases any lingering veiled suppositions.
“Oh, I hope it wasn’t that annoying…I should have gotten up and left so that you would have enjoyed the show better.”
“No, no, really don’t feel put off…because…to tell the truth… I rather enjoyed watching you watching the singer.”

Author Karen Stary is a resident of San Diego, California, and a native of New Jersey who spent her summers on the Jersey Shore. She writes about the fragile relationships between women and men in today’s world. Stary asserts that women have yet to realize their true potential: to achieve something greater than any woman who came before them. 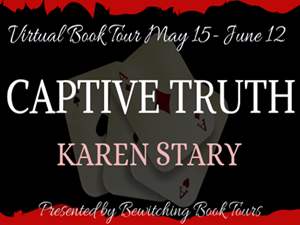 Steel Reign: Flight of The Starship Concord by Braxton A. Cosby