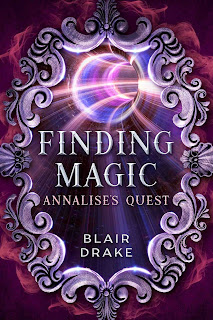 Annalise’s Quest
Finding Magic
Book Ten
Blair Drake
Genre: Paranormal Romance
Publisher: Magic Quest Books
Number of pages: 225
Word Count: 78,750
Cover Artist: Jennifer Zemanek/Seedlings LLC
Tagline: What would you do to find your magic?
Book Description:
Angry at being forced to attend Gray Cliff Academy, Annalise has struggled to fit in. She sneaks onto the roof to skip a class but gets caught up in a magical event she’s not entitled to attend. Tossed into the ‘between’ for those that have done wrong, she soon realizes she’s not alone…
Only the longer she’s stuck there, the harder it is to find a way out… but for every wrong deed there’s a right one… if she can figure it out in time…
Amazon

Blair Drake believes in magic, especially the magic of stories with fantasy, adventures, romance, action, and surprises. She has loved writing and living in the stories of the Finding Magic series and is so excited to share the quests of the Gray Cliffs Academy students with her readers.

When she’s not writing about magic, she’s reading about it. Her influences are Cassandra Claire, Neil Gaiman, Rick Riordan, Garth Nix, and many more.

In the mortal plane, following the lure of magic has drawn Blair into strange and wonderful adventures from Australia to New York City, with many stops in between. She currently lives near Denver. Her very favorite spot is a red loveseat in her office, frequently shared with two cats, an outnumbered Dalmation, and occasionally her bewitched husband.

She might have gone to a school similar to Gray Cliffs Academy and would love to go through a magic portal. In the meantime, she’s creating her own in more books of magic. 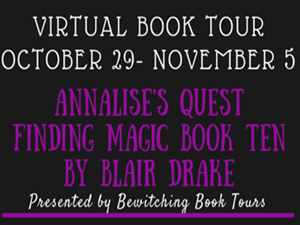