“Hey. Coal.” With raised eyebrows, Hannah held up the two lumps of coal that

had come in his snowman kit. “Get a good long look because this is what you’re getting

He couldn’t stop smiling at her. A dozen times each hour today, he’d wished he

that. She was singing Frosty the Snowman with a carefree abandon he’d never felt before.

If only he didn’t have the end of the year looming over him.

“Okay, pass me his corn cob pipe,” she said.

He pulled the “pipe” out of the box and stared at it. “Our snowman is a smoker?

“It was written back before people worried about things like their lungs,” she said,

He pulled it away. No. It wasn’t right. “His days are already numbered, and he’s

“Ohhhh, right.” She tilted her head. “Wow, that does make him a bit of a rebel,

doesn’t it? I bet the snowladies were all suitably impressed.”

Zeit looked around. There were mortal children all around. Young impressionable

mortal children. He put the pipe back in the box.

“Or he’s not really a rebel. He likes to play things safe. Then again,” she tapped

his coal eyes, “he did earn his coal. Maybe he’s got nothing to prove. There should be

buttons in the box.”

He pulled off his glove to search through the bottom of the box, pulling out three

buttons. “What is he buttoning up?” he asked as he handed them to Hannah.

She’d started pressing the buttons into his middle snow section, but she stopped

and bit her lip as she stared at the round button still in her hand. Finally, she shrugged and

pushed the last one in. “I think you’re overanalyzing this.”

“Or it’s a mortal tradition that could use some scrutiny.” He held out the faux

carrot that came in his kit.

“Is he going to eat his own nose?” 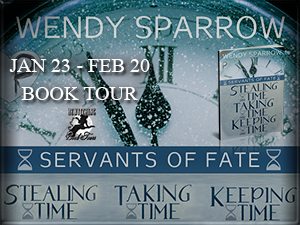 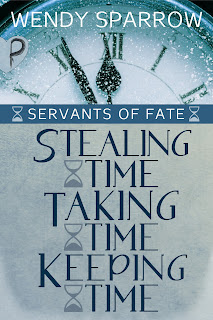 Servants of Fate
Boxed Set
Books 1-3
Wendy Sparrow
Genre: Paranormal romance
Publisher: Pen and Kink Publishing
Date of Publication: December 24, 2016
ISBN: 978-1-988233-21-5
ASIN: B01N1Q567S
Number of pages: 308
Word Count: 96,000
Cover Artist: Amanda C. Davis
Book Description:
As servants of Fate, Father Time’s sons must sacrifice a mortal’s lifetime on behalf of humanity before each year ends. It’s simpler if they don’t get involved, as their immortality is a barrier to relationships and to understanding the emotions of those whose lives end in a blink, especially if these time holders have a hand in it. Servants of Fate pass in and out of the lives of those around them, never interacting, until a different type of fate steps in. They can stop time, but love will leave them powerless.
Amazon
THIS COLLECTION CONTAINS ALL THREE TITLES FROM THE SERVANTS OF FATE SERIES
Stealing Time
Father Time’s son, Zeit Geist, must sacrifice a mortal’s lifetime to the Fates each New Year’s Eve. Last year—inexplicably, really—he made an 11:59 substitution. The Fates are pissed and they’re after his mortal Hannah. With the year ending, he ought to figure out why he’d saved her—and why he keeps doing it.
Following an unlucky year, Hannah Lyons needs a week’s holiday in a lodge to unwind. What she gets is near-death experiences and a sexy immortal who can’t avoid kissing her, but might have to kill her. After all, even Zeit can’t hold back time indefinitely.
Taking Time
Tempus fugit. Time flies…unless you’re Tempus Halt, Father Time’s son. Day in and day out are the same, except for New Year’s Eve when he steals the life of a mortal on behalf of the Fates. This year marks his first failure to stay the monotonous course. A mortal’s kiss and her insistence on taking the place of his year’s sacrifice stalled out everything. Now, Tempus has to keep her alive for a year so his sacrifice isn’t wasted, but that’s the only reason—definitely.
One of these crazy grim reapers stole Lacey Carpenter’s estranged father’s life two years ago. She’ll give her own life rather than letting it happen again. It backfires when Tempus doesn’t actually kill her, and they have to spend the year together. She’s falling for an immortal who stops time, not just to save her life, but also to ruin her dates and steal her books. This can never work and fate is just not on her side—in fact, they’d really like her dead before Tempus falls for her in return.
Keeping Time
When Ruin’s mortal sacrifice to the Fates on New Year’s Eve is already dying, it should be the easiest life he has to take, but not this year. The dying man knows Ruin is there to kill him, but he asks Father Time’s son to look after his twin sister. Ruin can’t stay away from the sweet and sensual Phoebe. His previous interactions with women changed the definition of his name, Ruin, so he can’t fall for her, especially when the lovely mortal doesn’t know he killed her brother.
Phoebe’s brother promised to send her a guardian angel, but Ruin seems too devilish to be holy. He only wants to be friends and keep watch over her, but she can’t resist him. Loving Ruin is a sin tempting her heart. How wrong is it to cause an angel’s fall? Ruin and Phoebe’s time is running out as another New Year’s Eve sacrifice approaches, and Ruin might lose everything for keeping his true hand in fate secret. 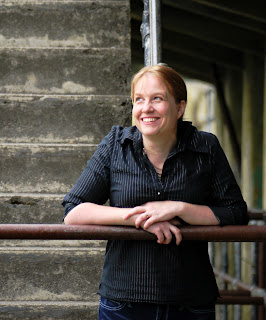 About the Author:
After a childhood spent wandering as a military brat, Wendy Sparrow found her home in Washington State. Her days involve convincing her two kids she knows how to properly parent and her nights showing her husband all the cool things romance authors know… or goofing around online…  or reading, but mostly the first thing.
She’s active in OCD and autism communities and writes on her blog to support awareness in both. With her whole heart, Wendy believes everyone deserves a happily-ever-after. If she’s not writing or wrangling kids, she’s on Twitter, @WendySparrow, where she’ll chat with anyone about anything.
Web: http://wendysparrow.com/
Twitter: https://twitter.com/WendySparrow
Facebook: https://www.facebook.com/WendySparrowAuthor/

One thought on “Servants of Fate Boxed Set by Wendy Sparrow”