Andras grunted, the sound filled with suspicion. Irene bent down to tie her

shoelace, as much to avoid eye contact as anything. When she straightened up, something

in the distance caught her eye, shimmering like a mirage. She squinted, not sure she was

really seeing what she thought she saw.

“You know, now might be a good time for you to tell me what it was like to live in

a castle,” she said.

Andras shook his head, sadly, as if Irene had disappointed him. “You cling too

much to the past. Forget the trappings of life. Free your mind from these longings, and so,

free your soul. Only then will we be able to escape these shackles and enter Heaven to

rest at the side of God.”

Why did he always have to argue about everything? “For God’s sake,” she said,

Irene pointed to the hulking structure in the distance. “Because,” she said as

Andras whirled around to see what she was pointing at, “correct me if I’m wrong, but that

“Wow!” Irene said, her eyes roving over the dark, crenellated structure hulking in

the far distance. It gleamed dully, the color of burnt blood in a fading afternoon sun.

“What the hell do you think that is?”

Andras grunted. “As you said—Hell.”

Irene frowned at him, but her lips quirked in amusement. “Why do you have to be

so negative? It could just as easily be Heaven. God is supposed to live in a palace,

right—the whole ‘my father’s house has many rooms’ thing? A castle is just a type of

Andras gave her a dry look. “Does that look like Heaven?”

imagined Heaven when it shimmered, as if the fading sunlight had been redirected by

mirrors. Light rippled across the castle’s surface and the dull, dark, burnt-blood color

corners as if whipped by wind. Irene thought she could hear them snapping crisply.

Irene looked at Andras, and he looked at her. His expression made it clear that he

had seen the same transformation she had. It was as if the building was trying to trick

them into coming closer. 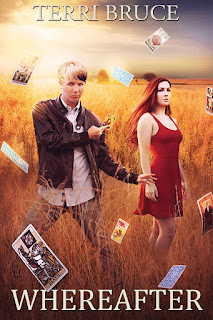 Whereafter
Afterlife
Book 3
Terri Bruce
Genre: Contemporary fantasy/paranormal
Publisher: Mictlan Press
Date of Publication: March 15, 2016
ISBN: 9780991303649
Number of pages: 345
Word Count: 100,000
Formats available:
Paperback and all ebook formats
Cover Artist: Shelby Robinson – artwork
Jennifer Stolzer – layout and design
Book Description:
How Far Would You Go To Get Your Life Back?
Stuck in the afterlife on an island encircled by fire and hunted by shadows bent on trapping them there forever, Irene and Andras struggle to hold onto the last vestiges of their physical selves, without which they can never return to the land of the living. But it’s not just external forces they’ll have to fight as the pair grow to realize they have different goals. Irene still clings to the hope that she can somehow return to her old life—the one she had before she died—while Andras would be only too glad to embrace oblivion.
Meanwhile, Jonah desperately searches for a way to cross over to the other side, even if doing so means his death. His crossing over, however, is the one thing that could destroy Irene’s chances of returning home.
Too many obstacles, too many people to save, and the thing Irene most desperately wants—to return to her old life—seems farther away than ever. Only one thing is clear: moving on will require making a terrible sacrifice. 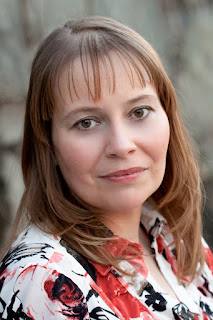 About the Author:
Terri Bruce has been making up adventure stories for as long as she can remember and won her first writing award when she was twelve. Like Anne Shirley, she prefers to make people cry rather than laugh, but is happy if she can do either. She produces fantasy and adventure stories from a haunted house in New England where she lives with her husband and three cats. She is the author of the Afterlife Series, which includes Hereafter (Afterlife #1) and Thereafter (Afterlife #2) and several short stories including “Welcome to OASIS” (“Dear Robot” anthology, Kelly Jacobson publisher) and “The Well” (“Scratching the Surface” anthology, Third Flatiron Press).
Website/Blog: www.terribruce.net
Goodreads: www.goodreads.com/TerriBruce
Facebook: http://www.facebook.com/authorterribruce
Twitter: @_TerriBruce