Henry stood next to his father surveying their largest

field. He longed to say that the seeds might yet sprout, that

there was still time to yield a return, but the undeniable truth

lay right before them: drought had come to Ireland. Their

investment in imported flaxseed was lost.

expression of a man whose hope was as withered as his crops. “A

hundred days was all we needed, all that stood between us and

prosperity.” He kicked a clod of dirt, and it turned to dust.

“It’s all gone, gone along wi’ the horse that harrowed the

A lump rose in Henry’s throat. He ached for his father, and

he missed their horse. Paddy was a fine animal purchased ten

years ago after a bumper crop of rye, when Edward McConnell’s

and Paddy plowed another man’s fields.

“We will pray, Father. God will help us.”

“God’s groping in our pockets right along wi’ your Uncle Sorley.

Praying did nae pay our tithes or the hearth tax, did it?”

Surely he didn’t mean that. Everyone knew Edward McConnell

to be a godly man.

“We’ll get more seed, Father. It’ll grow next year.” He

squared his shoulders and tried to look confident.

“Will nae do us any good. Your Uncle Sorley plans to

decrease our tillage in favor of pasture.”

Father spat on the parched ground. “He stopped by yesterday

looking for it. Said he’ll call in after services on the

Sabbath.” He ground his teeth together. “I’d gi’ anything to see

the look on his face when he finds our empty hoose.”

Henry’s chest tightened. Were they moving again? He rubbed

fields to the northeast, where their last home rose above a

copse of ash, and where his mother’s daffodils still swayed in

the Ulster wind. Four years ago, the cattle plague put them out

Phoebe, their only remaining sow. The hut contained a hearth, a

curse necessitating the payment of tax despite the fact that it

With no peat left and no horse to haul more from the bog,

They had room to fall; many Catholics lived in the open,

bleeding cattle and boiling the gore with sorrel for sustenance.

Perhaps his father intended to join them.

“Are we moving again?” he asked.

Father slipped two fingers under his brown tie wig and

rubbed his temple, something he often did when puzzled.

Henry followed his gaze to the ruins of Burt Castle, which

sat atop a knoll, just above Uncle Sorley’s grand plantation

Buried what? Maw? She died five years ago, not nine.

Father sunk his head into his hands, muffling his speech.

Henry stepped into the hard, hot field, directly in front

of his father. “Father, what in the name of heaven is it?”

Father tilted back his head and whispered to the sky,

“Forgive me, Elizabeth.” He looked at Henry. “I buried

something. Your maw insisted on it, said it was pagan and she

did nae want it in her hoose. I did as she asked. A woman can

talk ye into cutting off your own hand, Henry, remember that if

lay buried. He’d never heard it mentioned before, and he was a

skilled eavesdropper. “What was it? What did ye bury?”

Father inhaled deeply, removed the worn tricorn from his

head, and tucked it under his arm. “I’ll tell ye the whole tale,

but first, we have to dig it up. We canny do that until after

dark.” He turned without warning and headed for home.

Henry followed him, volleying questions against his back.

Father said nothing until they reached their hut. There, he

stormed past Phoebe, flung open the door, and nodded toward a

“Gather up our claithes and shoes. Use my good cloak for a

sack. Bring the dried nettles.” He grabbed the peat spade, the

only tool left from his once abundant array of implements, and

used it to prop open the door.

“Why bring the nettles?” Henry hated the bitter leaves.

“There are more nettles than rocks in Ulster.”

When his father offered no reply, he lobbed another

question, desperate for clues as to their destination. “Will ye

not wear your good cloak, if we are traveling far?”

So, they were going to some populous place where good

Henry spread the cloak across the dirt floor, careful to

avoid Phoebe’s manure. The cloak was long out of fashion, but

still a quality garment that Edward McConnell could not afford

to replace. He threw their scant belongings into the middle of

it, brought the cloak’s corners together, then tied them

together to form a sack. Excepting Phoebe and the clothes they

wore, the sack contained everything worth saving.

He sat on the rickety chest to watch his father pace.

When Burt Castle became a silhouette against an amber

horizon, Father donned his hat and cloak and ducked outside.

Henry followed him to the stone wall separating their field

Father began to tumble a section of wall.

With his perplexity and fear mounting, Henry assisted until

there was enough of a breach to push Phoebe through the wall.

She trotted away, grunting and wagging her curly tail,

while he helped restack the stones to prevent her from

He could no longer hold his tongue.

“What are we doing? Why are we putting Phoebe in Uncle

Archibald and Aunt Martha’s field? Are we going somewhere? Where

are we going? Why are we taking nettles?”

In his frustration, he grabbed his father’s arm.

Father whirled around and gave Henry’s shoulders a fierce

shake. “Get hold of yoursel’, lad, or I’ll cloot ye upside the

noggin. No more questions. Just do as ye’re told.”

Henry stared at his father, who had never once laid a hand

on him, nor threatened to.

When Henry returned with their belongings, his father was

“Get a good look around ye, son. It’s the last time ye’ll

clap eyes on your hame.” 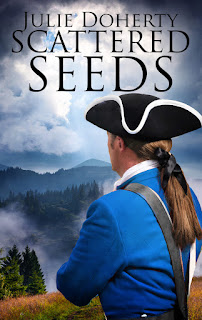 Scattered Seeds
Julie Doherty
Genre: Historical fiction, elements of romance
Publisher: Soul Mate Publishing
Date of Publication: April 27, 2016
ISBN: 1-68291-050-4
ASIN: B01E056H1Q
Number of pages: 339
Word Count: 100,000
Cover Artist: Fiona Jayde
Book Description:
In 18th century Ireland, drought forces Edward and Henry McConnell to assume false names and escape to America with the one valuable thing they still own–their ancestor’s gold torc.
Edward must leave love behind. Henry finds it in the foul belly of The Charming Hannah, only to lose it when an elusive trader purchases his sweetheart’s indenture.
With nothing but their broken hearts, a lame ox, and a torc they cannot sell without invoking a centuries-old curse, they head for the backcountry, where all hope rests upon getting their seed in the ground. Under constant threat of Indian attack, they endure crushing toil and hardship. By summer, they have wheat for their reward, and unexpected news of Henry’s lost love. They emerge from the wilderness and follow her trail to Philadelphia, unaware her cruel new master awaits them there, his heart set on obtaining the priceless torc they protect.
Book Trailer: https://youtu.be/bNzrVFnl9Ts
Amazon 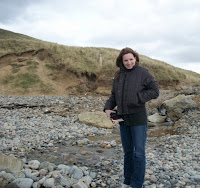 About the Author:
Julie Doherty expected to follow in her artist-father’s footsteps, but words, not oils, became her medium. Her novels have been called “romance with teeth” and “a sublime mix of history and suspense.”
Her marriage to a Glasgow-born Irishman means frequent visits to the Celtic countries, where she studies the culture that liberally flavors her stories. When not writing, she enjoys cooking over an open fire at her cabin, gardening, and hiking the ridges and valleys of rural Pennsylvania, where she lives just a short distance from the farm carved out of the wilderness by her 18th century “Scotch-Irish” ancestors.
She is a member of Romance Writers of America, Central Pennsylvania Romance Writers, Perry County Council of the Arts, and Clan Donald USA.
Facebook: https://www.facebook.com/juliedohertywrites/
Twitter: https://twitter.com/SquareSails
Goodreads: http://www.goodreads.com/author/show/532434.Julie_Doherty
Web: http://juliedoherty.com/
Blog: http://juliedoherty.com/blog