Suddenly, I wasn’t the biggest, baddest thing on the block.

They always traveled in packs. Enough of them could take me down. Revenants were

cousins to vampires, undead beings with too much spirit. Essentially ghosts with physical reality.

I picked up the pace, steering toward the middle of the street and well away from dark

corners. If I had a heart rate, it would have been pounding. My blood was rare and prized. One

sip and the revenants would keep me alive to serve as a drink dispenser.

I fished through my bag. Where was my cell? Jonathan would come. Provided I could

Meaty thwacks rang out in the alley as I passed by.

A soft oomph, followed by a clipped English accent, “Try that again, bastards.”

A lone and gorgeous male vampire had been captured. Three revenants had him pinned

against the wall. Two held his arms and one pinned his legs. Three more surrounded him like a

The vampire snarled. Long fangs bared, presumably pissed off at his capture. With his

sculptured physique, he could handle the situation. Right?

None of the baddies had noticed me yet. I could leave.

Another punch landed, connecting with the vamp’s mouth. The crack echoed in the alley.

The vampire hottie spat, his lip broken. Blood trickled down his jaw, seeping into the

stark white collar of his button down shirt. “Think twice before you cut me, mate. I’ll smash all

of your fucking heads in.”

One added, “I’m so scared,” before swinging his knife and tearing a gash in the

vampire’s chest. The pack laughed. A revenant approached the vampire with IV bags.

Crap-a- roni, now I had to get involved. They planned to bleed him out. That’s what

revenants did. They took a vampire’s blood and drained him or her dry. The blood was then sold

to the highest revenant bidder. They believed our blood could remove the excess spirit from their

bodies, returning them to their true vampire form.

Problem is—it’s a myth. There’s no way for a revenant to become a vampire, any more

than I could become a zebra if I wanted to. These guys were zealots. Deranged lunatics.

“This is your last warning, blokes,” Mr. Sexy English accent said. I tried not to shiver at

the sound of his rich voice. Heady whiffs of his sweet scented blood drifted my way. Like a fine

wine, the smell promised a delicious and satisfying taste. Saliva pooled in my mouth. My fangs

dug into my bottom lip.

Damn. I should have run when I had the chance. The pack turned in my direction, their

faces eager for more blood. I cringed under the gaze of the hollow-eyed, pale-skinned nightmares

who all wanted a piece of me.

The nearest one licked his gray, rubbery lips. “Yum. Dessert.”

I was too stupid to live. Why didn’t I run? My feet were frozen to the spot. I did the

lamest, girliest thing possible. I swung my purse. And connected. A solid hit to the nuts.

The male vampire bucked, tossing the revenant off his left arm. Partially free, he ripped

the arm off the other revenant before the thing could even react. With balled fists, Mr. Hottie

crushed the skull of the captor holding his feet.

“Don’t stand there like a daft pony!” the vampire scolded. He snapped the neck of the

nearest revenant, then motioned. “Get out of my way!”

“What? Without my help, you’d still be trapped against a wall!” I ducked and stepped

aside, narrowly avoiding the gray-lipped revenant who had thought I was dessert.

“The rubbish bin would be more help than you!” Mr. English silenced two more

The revenant recovered from the nut bash and charged me again. His fingertips knocked

off my ball cap. I kicked him in the stomach, grabbed the garbage barrel and slammed it over the

revenant’s head as he honed in on me. The plastic bin wouldn’t kill the thing, but he couldn’t see

Mr. English and I watched as the last revenant bounced against a brick wall before falling

over, his legs scissoring.

“Time for this one to bugger off as well.” Mr. English yanked off the barrel and snuffed

out the revenant with a bone-shattering blow to its head.

One by one the corpses disintegrated into dusty husks. A breeze blew through the alley

and scattered the remains. Gray vaporous clouds floated around before dissipating into the air.

To a passerby, the revenants’ final passage would look like dirty car exhaust.

“Well, I’m off then. Have good evening.” He brushed dirt off his tailored trousers. “Sod

it, they scuffed my shoes. And this shirt is ruined.”

“Yeah. What a tragedy. You’re lucky. You could have been a revenant Slurpee.”

He sniffed at the suggestion. “I was never in any real danger.”

“You could have fooled me,” I retrieved my ball cap from the grimy sidewalk.

eyes and highlighting the fine bone structure of his face. I tried not to gawk.

I gathered my tangled hair and mashed it under the hat. “Looks to me like they had you

pinned against the ropes.” Did I mention he was gorgeous? Like a cover model. An underwear

cover model. I cleared my throat. He was a total stranger, and while I bet he looked divine in

only underwear, I needed to stop ogling him.

When he stared at me and didn’t reply, I lamely added, “You know? Down for the

“I understood the reference, luv,” he said in his damn fine accent.

A man-shaped shadow shifted from across the street, forming a dark blot in the alley’s 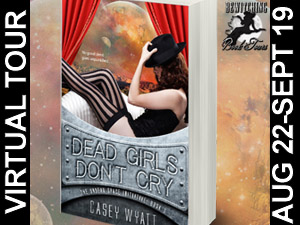 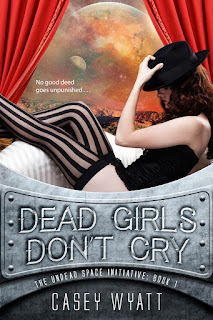 Dead Girls Don’t Cry
The Undead Space Initiative
Book 1
Casey Wyatt
Genre: Urban Fantasy/Paranormal Romance
Date of Publication: August 18, 2016
ISBN-13: 978-1534902718
ISBN-10: 1534902716
ISBN13: 2940153402147
ASIN: B01HUFDDT2
Number of pages: 410
Word Count: 83,000
Cover Artist: Kim Killion, Inc.
Book Description:
Cherry Cordial, vampire stripper extraordinaire, spectacularly messes up her life with a single act of kindness. How could she have known when she rescued gorgeous rogue Ian McDevitt that she would be implicated in the vampire queen’s murder?
Soon, she faces the wrath of the entire vampire community. To escape retribution, she joins a settlement program to colonize Mars. Her choices are grim: hurtle through space to the red planet to face the unknown and possible death, or stay on Earth and face certain annihilation.
To make things even more complicated, a certain gorgeous rogue seems to be shadowing her every move…
Amazon     Kobo     iTunes      BN 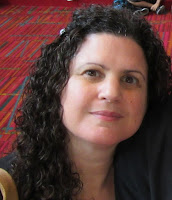 About the Author:
Casey Wyatt grew up in a mid-size Connecticut town where nothing exciting ever happened. To stem the boredom, she spent plenty of time reading fantasy and sci-fi novels and imagining her own adventures in her head. Not much has changed since she’s grown up, only now she shares those made up stories with her readers and earns a coin or two.
Newsletter: http://goo.gl/Etyait
Website: www.caseywyatt.com
Blog: www.caseywyatt.com
Facebook:  https://www.facebook.com/casey.wyatt.37
Twitter: @CaseyWyatt1
Tumblr: http://caseywyatt.tumblr.com/
Pinterest: https://www.pinterest.com/caseywyatt37/
Instagram: caseywyattbooks

But in this model as well, Im up like qual a indicaГ§ГЈo do citrato de sildenafila viagra! Perhaps you can write next articles referring to this article viagra online billig. Your cholesterol or blood pressure reading came back high гѓђг‚¤г‚ўг‚°гѓ© дёЌж•ґи„€