“Quite a storm we had last night,” Tucker said to break the awkward little silence that

had fallen between them. “I wasn’t sure my Jeep would make it here this morning.” He turned to

smile at Logan politely and his face froze. Logan was gazing at him like a predatory cat—like

Tucker was a juicy meal and he hadn’t eaten in a month. He felt his cock twitch in his pants, and

he glanced quickly away.

like this, and Logan still made him as nervous as a teenage girl on her first date. His cock was

suddenly so hard he felt like it might rip right through his pants, and he was glad for his long

overcoat that helped hide it. What the fuck was wrong with Tucker thinking about how good-

looking Logan was or what color his damn eyes were, for Christ’s sake? He had to get a grip on

He took the chair across from Logan, sternly telling himself to cool it. He sank too far

down into its luxurious depths almost at once. He pulled out and perched on the edge of the

chair, glancing over at Logan irritably, as if he were somehow the cause. Logan gazed back at

him serenely, though the fact that his gaze was roaming up and down Tucker’s body hadn’t been

lost on Tucker at all. As a matter of fact, it was making him almost unbearably hot.

Sweating a little, he thought about taking off the coat now that he was sitting down. He

shrugged out of it, glancing over at Logan. “Warm in here. Mind if I take this off?”

“No, not at all. I want you to be comfortable.”

Tucker glanced at him sharply to see if he was teasing him. The words were perfectly

proper, but Logan had always had a knack for keeping him off-balance. He pulled out the essays

from his briefcase and then dug for his pen. Damn it, he felt like he was coming off as an idiot

here, awkward and inexperienced, when he wanted to be smooth and professional—typical when

he was around Logan, just like in the old days. He felt himself blushing hotly as he realized he

Logan didn’t comment, but he did quirk up one imperious eyebrow and then nodded.

coming up with a pen.

Tucker’s complexion had always been the white, milk-fed kind that showed his every

strong emotion clearly by staining his cheeks bright pink, and he felt like they must be blazing

now. Once, long ago, Logan had told him it was an endearing trait. Trying to pretend he hadn’t

drawer, Tucker quickly returned his gaze to the notebook in his hand, glancing up when Logan

“Thanks,” Tucker said tersely, taking the pen and numbering each paper. “I didn’t get a

chance to do this before I arrived. I think that numbering them would be the easiest way, don’t

you? That way you won’t be swayed by names or anything. Not that you would be…I mean, I’m

sure you don’t know any of our kids. And even if you did, I didn’t mean to imply…that is, I’m

sure you wouldn’t…” Tucker knew he was babbling but couldn’t seem to stop. Finally, he thrust

the small stack of essays out toward Logan, who was staring calmly back at him.

“Do I make you nervous, Aubrey?” he asked softly. 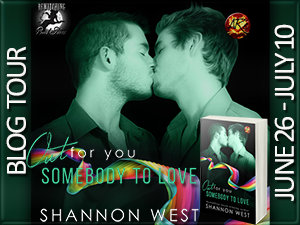 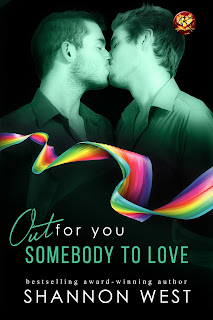 Somebody To Love
Out For You
Shannon West
Genre: MM Contemporary/BDSM
Publisher: ARe Books
Date of Publication:  6/1/15
ISBN: 978-1-936387-97-7
ASIN:
Word Count: 30,500
Cover Artist: Erin Dameron Hill
Book Description:
If you love someone…don’t let go.
Lonely and miserable, A.J. Tucker lives a life of quiet desperation. When he’s chosen to assist an award-winning author booked to speak at his school, the teacher realizes the shameful secret he harbors could be revealed. And it’s one that could destroy his quiet, private life if his family and school board find out.
Logan Williams has come to this small North Carolina town for one reason only: to get revenge on the submissive who left him with little explanation. The powerful Dom plans to do whatever it takes to convince Tucker to resume the lifestyle and relationship he left behind.
When these two men come together in a powerful clash of wills, the love between them resurfaces. Ultimately they are forced to reexamine everything they thought they knew about one another and themselves.
Available at ARe
About the Author:
Shannon West currently lives in the South with her husband and family. A lover and avid reader of M/M romances, she began writing them a few years ago and now has over sixty short stories, novellas, and novels to her credit. Shannon is a 2013 and 2014 ARe top ten bestselling author. She loves men and everything about them, and believes that love is love, no matter the gender. Though there is never enough time, she tries to work every day, giving in to the demanding men in her head and writing their stories. She writes shifters, sci-fi and BDSM along with contemporary, and loves, traveling, reading and watching scary movies on TV.
For more information on other books by Shannon, please visit her official website: www.ShannonWestBooks.com
https://www.facebook.com/shannon.west.399