Permission granted to Bewitching Tours for use in blog tour promotion

Kyle and Alia gazed into each other’s eyes, smiling. Alia drew her eyes away and gazed up at the moon.

The emotion she was experiencing was making her a little uncomfortable. Yes, it was gratitude, but

there was something else underlying it. It was attraction, desire, and a kind of closeness she did not

Kyle’s voice was soothing when he spoke. “I looked at your well-groomed nails and hair and thought you

Alia smiled and looked down at the moist ground.

He continued. “You are strong, determined and have a heart of gold. I never expected you to do all the

things you did today. The way you got down and dirty and helped with the cleanup, the way you climbed

through that tiny chimney. And then you put your own life in danger to save Teshawn’s life. I’ve gained a

whole new perspective and a lot of respect for you.”

Alia kept her head down. She twirled a pebble between her fingers, her discomfort escalating. Her mind

raced as she tried to make sense of all the emotions churning within her.

Kyle placed his finger under Alia’s chin and lifted her face. He gazed into her dark brown tapered eyes

and was captivated by her beauty. Her long hair flowed gently around her face. Her exotic eyes held a

dreamy, sultry expression. Kyle stared at her, lost in her gaze, enthralled by her clear flawless skin, her

high cheekbones, and those deliciously full sensuous lips. He whispered, “Alia, you are beautiful, on the

Alia felt her heart flutter, beating like a drum in her ears. She could hardly breathe as she gazed into his

large light-brown eyes. She saw passion, desire, and felt herself slipping, falling into his romantic trap.

Kyle touched her hair tentatively. It was soft and silky. The attraction for Alia was so strong it took his

breath away. Slowly he lowered his face toward hers, his eyes never leaving hers. He saw in them

longing, desire, and a vulnerability that was totally uncharacteristic of the super-composed Alia. His

heart raced as his lips inched closer and closer.

Alia closed her eyes. Her mind was in turmoil. A day ago she had hated Kyle Robinson. Now here they

were, on the verge of doing something she had never done before. She was confused, feeling things she

should not be feeling. Not for Kyle, not for anyone at that point in her life. She felt helpless. Her mind

Hurricane of the Heart by Jewel Amethyst

was telling her not to do this, but her body was ignoring it. His hand in her hair, the other on her chin

Suddenly a moment of clarity ensued. This man would do anything and say anything to have a good

time. What happens after the kiss? Sex? And then he would be gone from her life just as quickly as he

Alia jumped up from the rock, leaving Kyle seated, a strange expression on his face. “This can’t happen,”

“Alia, wait!” Kyle called to her departing back as he stood up from the rock. He had no idea whether to

chase after her or let her be. No woman had ever run away from him like that before. Kyle looked at Alia

as she crossed the fence and headed for the house. “Man!” he exclaimed, kicking the rock he had been

So close to what? A kiss? A one night stand? An ephemeral tryst? Kyle looked longingly at her

disappearing back and realized one night with Alia would never be enough. She was the type of woman who would keep him wanting  more. 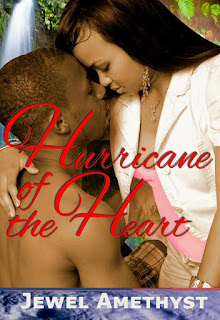 Hurricane of the Heart
Jewel Amethyst
Genre: Romance
Publisher: CaribbeanReads Publishing
Date of Publication: July 25, 2015
ISBN: 978-0-9964358-2-6
Number of pages: 292
Word Count: 85,900
Book Description:
The Player
When Kyle agrees to be the best man at his best friend’s destination wedding in Dominica, he has one thing on his mind: partying. But all that changes when a powerful hurri¬cane strikes the island and he finds himself trapped in a vil¬lage and falling hard and fast for the indigenous beauty queen, Alia Graneau.
The Planner
Alia Graneau has goals that do not include men, least of all an immature, irresponsible American party-animal like Kyle. But the hurricane devastates more than her beautiful island; it wreaks havoc on her heart when she falls under Kyle’s spell and is forced to choose between her ambition, her love for her country and her love for Kyle Robinson.
Can their love, born in a hurricane, survive the ravages of real life? 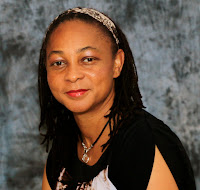 About the Author
Jewel Amethyst is the author of two mass market romance novels, Marriage of Convenience and From SKB with Love one of three stories in the Holiday Brides’ romance anthology. Hurricane of the Heart is her second full-length romance novel. Jewel was born and raised on the Caribbean island of St. Kitts and currently resides in Maryland with her family.
http://www.caribbeanreads.com/hurricane/
http://www.amazon.com/Jewel-Amethyst/e/B0042ICMPC
https://www.facebook.com/jewel.amethyst.9