Stingray behind a police car that had the left rear door hanging open. A young boy with sandy blond hair

yelled out questions to anyone within earshot. A mob of reporters barked a barrage of questions at me,

but I ignored them and ducked under the police tape, making my way to the front porch. A bloodstained

curtain hung out of a broken window to the right of the front entrance. The shattered bay window to

left of the entrance had pieces of the frame bent towards the interior of the house. The highest-ranking

officer of the Austin Police Department, and an old friend of mine of many years, exited the home just

as I stepped onto the front porch. I shook his hand. “So, what’ve we got here, Chief?” “It’s bad, Aaron.

Tenemos dos víctimas.” Chief David Hernandez spoke perfect English, and without much of an accent,

but that didn’t stop him from throwing in a little bit of Spanish for my benefit. It was David’s not-so-

subtle way of trying to mold me into a bilingual detective, which of course is useful in Texas. I still

couldn’t speak the language, but, thanks to David, I could at least understand it. “So, who are our two

vics?” “Carol and Tony Scoletti. Whoever killed them must have been really pissed.” “Yeah, that’s usually

the case” I bobbed my head in agreement. Murderers do tend to have slight anger issues. “So, we have

a double-homicide. Doesn’t happen here much, but what’s so unusual?” “You haven’t seen the bodies…

or what’s left of them, that is.” “Okay.” I lowered my brow. “Now you have my attention. Just what

exactly are we dealing with?” “Follow me,” he said, and led me to the living room. The body of a

from her shoulder, attached only by tendons. Intestines spilled onto the floor from her torn stomach.

She also had three large gashes across her breasts and several more on her bare legs. “Jesus! You

weren’t kidding. What the hell did this guy come at her with, a chainsaw?” “You haven’t seen anything

yet,” Chief Hernandez answered, and then headed down the hallway towards the bedrooms. I followed

him inside the first bedroom. Blood and gore painted the walls and ceiling. Only the torso of what used

to be a body lay in the middle of the room in a pool of blood, guts and ripped flesh. Pieces of bloody

flesh hung from the ceiling fan. There was a severed arm on a blood-soaked pillow on the bed and a

detached leg protruding out from underneath it. Where was the rest of the body? “This is the kid’s

bedroom,” he said. “He’s lucky to be alive. I don’t mean to sound morbid, but why spare him?” I noticed

muddy footprints mixed in blood underneath the shattered window. “Come on, Aaron. You don’t really

think anyone would do this to a kid, do you?” No, I didn’t, but you could never know for sure. Some

people have absolutely no conscience whatsoever. The kid was lucky. After examining the remains of a

man’s body, I asked, “That kid in the squad car. Has he said anything?” “Nada. Not a word since we

arrived.” “I’ll go to talk to him. See if I can get him to open up.” I tapped the shoulder of the crime scene

investigator taking photos of the body. “You have a swab kit I can borrow?” “Yeah, sure.” The young CSI

set her camera down and retrieved the items from her crime scene kit. “Need me to come with?” “Nah,

that’s okay. I got it.” My heart sank from the boy’s blank expression. Dry blood splatter peppered his

cheeks and forehead. The blood covering his clothes told me he’d had a front seat view of what had

happened. A seat that would have also given him a clear view of the perpetrator. “What’s his name?” I

asked the police officer in charge of babysitting the boy, while a bunch of strangers with badges, guns,

and funny-looking suits, filtered in and out of his home. “Cody Sumner,” the officer answered. “I can’t

imagine what he’s going through.” She shook her head and added, “Poor baby.” I knelt down next to

Cody and introduced myself. “Hi, Cody. My name is Detective Aaron Sanders, with the Austin Police

Department. Do you mind if I ask you a few questions?” Cody didn’t acknowledge my presence. “Are

you hurt anywhere?” Nothing. He just stared ahead. “Can I see your hands?” That time he gave me a

subtle shrug. I put on a pair of latex gloves and tenderly turned his hands over. Dried blood covered his

palms. I sighed and placed the boy’s hands back on his lap. I pulled a buccal swab from the kit that I

borrowed from the crime scene investigator. “I need to get some samples off your clothing and hands.

It’s not going to hurt though. Can you give me a little nod if that’s okay?” Cody faced me, his blue eyes

watering, and said, “They’re dead.” “I’m sorry.” I placed my hand on the back seat. “I promise we’ll find

and punish the person who did this, Cody, but we need your help. Can you tell me what happened?”

Cody focused on the back seat again. His crying came in constricted whimpers and sniffling. “That’s

gesturing me toward him. I met him halfway on the front lawn. “What is it?” “We have another crime

scene.” “Another one?” “Memorial Heights Cemetery. Busy day for the APD, and it’s about to get even

busier for you, amigo.” “Can we get Anderson or—” “No, I want you on this. You should head over there

right away.” “Why? What’s so special about this one?” “The grounds crew found three bodies. Two of

them with their heads missing.” He rubbed his hand over his face and took a breath. “What?” Finding

dead bodies at a cemetery was normal enough, but they tend to arrive in caskets. And they typically

have their heads attached. I asked again, “What?” “They’re kids, Aaron. Niños!” I couldn’t believe what I

had just heard. “What the hell is going on here?” “I don’t know, pero we have one sick cabrón targeting

children now. I need you to head over to the cemetery. I’ll call the FBI. This is way over our heads.”

“Whoa, wait a minute.” I hated dealing with feds. “The last thing we need is a bunch of bureaucratic

suits flashing badges around here and putting up a bunch of red tape. We can handle it ourselves.”

normal homicide. And speaking of decapitations, where’re the victims’ heads?” Good question. “All

right, I see your point. I’ll check out the cemetery. What about that kid over there?” Cody had stopped

crying. A police officer handed him a bottled water. “He’s our only witness.” “I’ll let you know where he 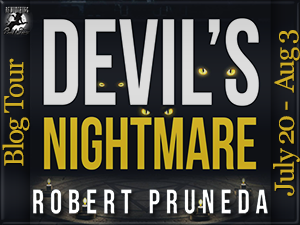 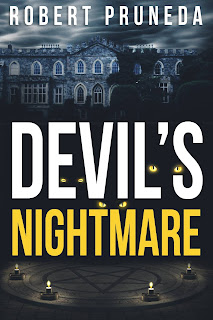 Devil’s Nightmare
Devil’s Nightmare Series
Book One
Robert Pruneda
Genre: Horror
Publisher:  Forsaken Imprint
Booktrope Publishing
Date of Publication: July 15, 2015
Cover Artist:  Laura Hidalgo
Book Description:
Veteran homicide detective Aaron Sanders thought he’d seen it all, but nothing could have prepared the seasoned detective for the mutilated remains of a kid’s parents or the equally vicious deaths of three boys at another crime scene.
As Aaron works to solve the cases and protect his only witness, an orphaned child, he learns of an ancient curse that leaves him questioning all he’s ever believed. Now, to save himself and the child, Aaron must confront his own inner demons, and some he never knew existed. But if he does, will he make it out alive?
Devil’s Nightmare is an occult suspense horror novel by Robert Pruneda, who shakes readers with his visually graphic scenes, supernatural twists, and disturbing settings in this first installment of the Devil’s Nightmare series. 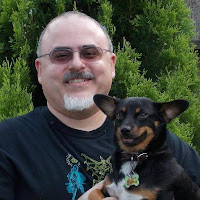 About the Author:
Robert “Sharky” Pruneda is a native Texan, video game “enthusiast” [addict], and fan of all things horror. He left a career in the newspaper industry in 2011 to pursue the life of a nocturnal author, brainstorming new and creative ways to creep out his readers. He doesn’t only write horror though.
He also pens the occasional family-oriented tale just to keep from going completely nuts with all those creatures of the night whispering in his ears. When he’s not pulling ideas out of his twisted brain, you’ll likely find him on social media or fighting alongside his fellow gaming buddies where they all get shot up into Swiss cheese (or turned into little bite-sized chunks because of “Sharky’s” obsession with explosives). Medic!
Pursue your dreams . . . and never look back.
https://twitter.com/SharkbaitWrites
http://facebook.com/AuthorRobertPruneda
https://www.goodreads.com/SharkbaitWrites
http://www.amazon.com/Robert-Pruneda/e/B004WDX2PG
https://www.youtube.com/user/SharkbaitWritesNewsletter sign up http://bit.ly/SharkyNewsletter