Kayla met me in the bathroom after last period, and watched as I changed out of my

super tiny mini-skirt into jeans. God, if my dad saw me in this skirt he’d have an aneurism.

“I can’t believe you lost Brain. God, Ang, he’s the best biker-bitch you’ve had yet.”

Speaking of aneurisms, my dad nearly had one when he found out Kayla called me Ang.

He calls me Angel, but says no one else is allowed to shorten my name. One of the reasons I love

Kayla is she isn’t afraid of my dad, or any of the other bikers, and she just kept calling me what

I shrugged as I buttoned my jeans and stowed the skirt in my backpack. “I got one of the

new guys, I’ve only met him a couple of times. He looks like he’s pissed at the world, and I

“He have a cool name?” she asked as we left the bathroom.

“Bash, and best I can tell, it isn’t ‘cause he’s bashful. And damn, the boy is beautiful.”

And he’d be so fucking pissed if he knew I’d called him a boy.

“How you gonna break him in?”

I shook my head. “Haven’t decided. He’s actually kinda scary, even for one of my dad’s

men. Also, I don’t think he’s that much older than us. I know when he first came, he couldn’t

have even the prospect patch yet, ’cause he wasn’t old enough. They treated him like one, which

had to suck, but he didn’t get his first patch until a few weeks ago, so I think he just turned

“You know his story?”

I shook my head. “He has a fucked up accent though. He isn’t from around here.”

with me, and he waved us to the RTMC vehicle waiting in the car line.

on and told him, “Bash, meet Kayla. She’s my BFF and you’re her ride now, too. Not just mine.”

He breathed deep, and I assumed he’d just realized she’s human and not wolf, and I

added, “We have a problem, you take care of her first, then me. I can handle myself a few

minutes, but she isn’t a fighter. Get me?”

again. “My orders are to keep you safe, Princess.”

I sighed and leaned my head back, looking at the road instead of him. “Those are your

orders from my dad. Thing is, I can make your life a living hell if I want, or I can help make this

a cushy assignment until you get your patch. I’ve grown up in the club, I know the drill. When

Kayla and I became best friends in the fourth grade, our dads had a talk. Their agreement was

she’d come to the house, but never to the club, and there’d be no parties at our house when she’s

over. She hasn’t been around ya’ll much at all. Her parents have met my prospect chauffeurs

over the years, and they’re mostly chilled about it now, but they’ll need to meet you sometime

“Basically,” Kayla said from the backseat, “you’re our bitch now. You’re our ride when

we need one, and you go get stuff we need, even if it’s tampons at two in the morning. You’ll

carry our packages for us when we go shopping at the mall, and if we ask if our ass looks fat

when we try on clothes, you’ll be honest and tell it to us straight from a guy’s perspective.”

“And not,” I added, my voice low and deep, “from my father’s viewpoint.” I held my

wolf in, so I didn’t growl at him in front of Kayla. “I know you’re supposed to cock-block us, but

I also know you can’t actually hurt any of the guys.” He held his hand up, thinking he could

silence me, and I said, “Fuck you, asshole. I’ll talk when I fuckin’ want to.”

He pulled into a church parking lot, put the SUV into park, tossed his cellphone into the

little compartment in the dash, and got out.

Bash might only be eighteen, but he wasn’t a boy. He paced like a caged animal and I

realized he was on the edge. This wasn’t a wolf thing, though — it was something else. He

moved with a lethal, fluid grace that set something inside me on fire, and I didn’t get out of the

vehicle, knowing he’d smell it on me.

I’d had a crush on my prospect when I was twelve, and my dad had given me someone

else and then hadn’t assigned anyone else who was my type, since. Brain had truly been like a

big brother to me. I mean, I knew he was dangerous, all the men of the RTMC are, but to me,

they mean safety. I’m their little sister, the president’s daughter, and they’ll all protect me with

I instinctively knew Bash didn’t necessarily represent safety for me, though.

With his back to me, he said, “Out of the car, Princess. You and I need to have a talk

without your friend hearing.”

My insides shook from the threat of violence in his voice, and I didn’t want to get out of

the car. I reminded myself he couldn’t hurt me without risking my dad’s wrath, and felt my body

chilling out. I couldn’t go outside smelling of fear — he’d eat me alive.

I heard him with my wolf hearing, but Kayla wouldn’t have a clue he’d spoken. I sighed

and told her, “Stay here a sec. Maybe we pushed him too hard? I’m gonna go talk to him.”

“My dad wouldn’t have assigned someone who’d hurt us, Kayla. I’ll just go talk to him a

As I got out of the car, I suddenly wasn’t so sure my dad wouldn’t have upped his game

with my prospects. He and my mom had a huge argument last week, but she convinced him it

was time he let me start double-dating with an early curfew. She’d successfully argued they had

to let me take baby-steps and learn responsibility slowly, or I’d go wild when I went off to

college without him around to supervise my every move. He’d finally agreed to it, but only if my

prospect tagged along. It was more than I’d hoped for, but at the time I’d thought it’d be Brain.

As I got out, Bash said, “Leave your cellphone — and anything else with a battery — in

This was standard RTMC procedure when we wanted to make sure we weren’t recorded.

Apparently, he was gonna say stuff my dad wouldn’t approve of. I tossed my phone onto the

dashboard, turned the radio up a little, and told Kayla, “I’ll be back in a minute.”

I followed him off the parking lot pavement into grass, assuring myself all the while that

my dad wouldn’t have sent someone likely to hurt me. Still, Bash was harsher than the other

guys my dad had assigned me, and I needed to be careful with my strategy. As soon as I caught

up to him, he said, “Here’s the way it’s gonna be, Princess. I may not be able to bash any of your

boy-toys’ heads in with witnesses around, but that don’t mean I can’t do it later. You want ‘em to

live? You make sure they stay on my good side. Nobody disrespects someone in the RTMC, not

even a prospect.” His voice deepened, and I heard his wolf. “Second thing, is you may be under

RTMC protection, but you’re a split tail, and that means you do what you’re told. You want me

to show you respect? You show it to me. I’ll throw your words right back at ya — we can either

get along, or not. I don’t give a flying fuck which you choose, Princess. You think you can make

my life hell? You have no idea what I can do to yours.”

Yeah, this I could work with. I gave him a half smile and shrugged one shoulder. “Take a

deep breath, Bash. You smell any fear comin’ off me?”

He took a whiff, shook his head, his eyes suddenly a touch uncertain.

“My dad stopped assigning me guys I could walk all over when I was about eight. He’s

miscalculated a few times, though he quickly gave me someone new once he figured it out. So, I

He shook his head. “No, Princess. No truce just yet. Let’s give it a couple of days, see

where we stand then.” 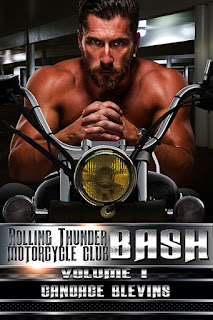 Bash, Volume I
Rolling Thunder Motorcycle Club
Book Three
Candace Blevins
Genre: Motorcycle Club,
Paranormal Romance, BDSM
Publisher: Excessica
Date of Publication:  October 16, 2015
Number of pages: 425
Word Count:  63,000
Cover Artist: Syneca Featherstone
Book Description:
What do you get when you mix a bad-ass werewolf biker with a beautiful she-wolf who grew up as the MC President’s daughter?
Sparks.
Book one of the Bash trilogy…
Angelica was raised not only as a biker’s daughter, but as Bud’s daughter — the president of the Atlanta RTMC, which meant she also had dozens of ‘uncles’ who made sure she was safe, happy, loved, secure.
Needless to say, her virginity was still solidly intact when she left for college.
She goes to school up north, where no one knows she’s a biker’s daughter at heart, and thoroughly enjoys her time as a civilian. She gets rid of her pesky virginity right away, but is mostly a good girl while she buckles down to get her degree, staying at school even during the summers to take as many classes as she can fit in.
She’s a different person when she comes home with her Master’s degree, and in spite of her intention to remain a civilian, some of the bikers don’t seem so much like uncles, anymore.
Warning: Lots of hot sex, a touch of BDSM, and an abundance of bad-ass werewolf bikers who are used to getting their way.
This is book one of a three book story. There’s a tiny cliffhanger at the end, but only three weeks until book two releases. 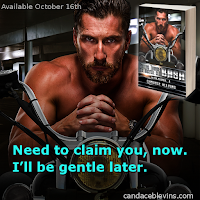 About the Author:
Candace Blevins is a southern girl who loves to travel the world. She lives with her husband of 17 years and their two daughters. When not working or driving kids all over the place she can be found reading, writing, meditating, or swimming.
Candace writes BDSM Romance, Urban Fantasy, Paranormal Romance, and is currently writing a kick-ass Motorcycle Club series.
Her Safeword Series gives us characters who happen to have some extreme kinks. Relationships can be difficult enough without throwing power exchange into the mix, and her books show characters who care enough about each other to fight to make the relationship work. Each book in the Safeword series highlights a couple with a different BDSM issue to resolve.
Her urban fantasy series, Only Human, gives us a world where weredragons, werewolves, werelions, three different species of vampires, as well as a variety of other mythological beings exist.
Candace’s two paranormal romance series, The Chattanooga Supernaturals and The Rolling Thunder Motorcycle Club, are both sister series to the Only Human series, and give some secondary characters their happily ever after.
You can visit Candace on the web at candaceblevins.com and feel free to friend her on Facebook at facebook.com/candacesblevins and Goodreads at goodreads.com/CandaceBlevins.
You can also join facebook.com/groups/CandacesKinksters to get sneak peeks into what she’s writing now, images that inspire her, and the occasional juicy blurb.
Stay up to date on Candace’s newest releases, and get exclusive excerpts by joining her mailing list!
http://www.candaceblevins.com/
http://www.facebook.com/candacesblevins
https://www.facebook.com/groups/CandacesKinksters
https://www.goodreads.com/author/show/4489132.Candace_Blevins
https://twitter.com/CandaceBlevins
http://amzn.to/1TFP6eL
https://pinterest.com/candacesblevins/
Newsletter — http://eepurl.com/W_Cij