Immediately after waking up, the body’s first reaction is to open its eyes, but this wasn’t

the case with Heather, at least not this time. She knew something bad had happened to her and

keeping her eyes closed gave her a fake feeling of safety. When she came back to her senses, she

place. What woke her was a strange voice whispering close to her. Her last memory was of

walking with Apollo to his car. Then he started acting really strange and pushed her.

Was this his plan all along? Or did something else happen?

Her dark thoughts were interrupted by the strange voice. Heather perked her ears. It

wasn’t Apollo, she concluded. She couldn’t understand what the voice was saying but she knew

it wasn’t English. Her ears finally caught something vaguely familiar.

Latin. It’s a prayer. Someone is saying a prayer. Maybe I’m in a church.

Martin, the sexual predator who’d kidnapped her when she was a child. She’d been rescued

before he could molest her, but he’d woken her just like this, with drops of water to her forehead.

Since then, having water dropped on her forehead was the thing she hated and feared most in her

life. Once she’d fallen asleep outside and a rain drop had fallen on her. Another time, a college

friend had done it as a joke. Each time, Heather woke up screaming and crying, with images of

Martin flashing through her mind. Heart racing, Heather quickly opened her eyes, only to see

Martin standing over her.

No it can’t be him. Martin is dead. He was executed a long time ago.

She blinked and when she opened her eyes the second time, Martin was gone. Instead, a

bald man appeared in front of her. He was chanting the same prayer over and over again. His left

hand was right above her head, holding a small bottle, which looked just like the ones flight

attendants serve. It was tilted slightly and with every “Amen” spoken, the man let a drop of

liquid fall on Heather’s forehead. As it hit her skin, the liquid mixed with the blood from the cut

on her forehead, oozing over her nose and eyes. Heather wanted to move, to get up and run away,

but the fear paralyzed her.

The strange man had no reaction when she opened her eyes. He remained still and kept

staring right at her, chanting, like he was hypnotized.

But he stopped before dropping the liquid on her forehead with the ‘Amen’.Then, she

Heather’s face. He collapsed next to Heather, his head hitting the asphalt near her left ear. In the

few seconds of perfect silence that followed, she couldn’t hear him breathe. He was dead.

Heather started screaming. The loud noise filled up the narrow dark alley. Out of the same

darkness, a man’s silhouette appeared in front of her. Before she could realize who it was, he had

his hand pressed tightly against her mouth.

“Be quiet,” Apollo said as he looked beyond the dumpster like he was searching for

A muzzled sound came from her mouth.

“Listen to me very carefully,” he continued while his hand was still pressed against her

mouth. “Your life is in danger. If you want to get out of here alive, you have to do what I say,

when I say it. Do you understand?”

“I’m going to take my hand off your mouth, but you have to stop screaming.”

Apollo removed his hand. Heather didn’t make a sound. She looked left, at the dead man

lying next to her. Just as she did, his hand twitched. Heather screamed again. This time, her own

“Here’s what I want you to do,” Apollo said, his green eyes glinting in the faint

light.“When I say ‘now’, run to the car, get into the passenger seat and put the key into the

ignition. Stay as low as possible. I’ll be right behind you.”

“If I don’t, neither do you,” he replied with a calm voice.

He peeked over the dumpster.

He handed her the car keychain and she nodded.

came from. Heather got up and started running straight to the car. She got in and, as instructed,

placed the key into the ignition. She curled up on the seat and waited. The few seconds she

waited seemed like minutes. Heather moved her head between the front seats to see what was

happening behind her. Apollo was moving slowly toward the car, his back to it, shooting down

the alley. When he emptied his clip, he ran and got into the driver’s seat. He reloaded his gun,

dropping the empty clip on the floor of the car, and placed it in his lap.

Before Heather finished her sentence, a bullet came out of the darkness, shattering the

rear window. The bullet missed Apollo’s head by inches and exited the car through the

windshield, cracking it. Heather screamed again, this time without bothering to cover her mouth. 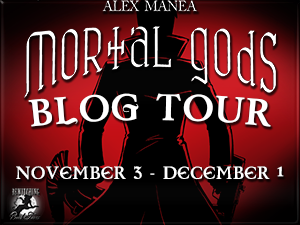 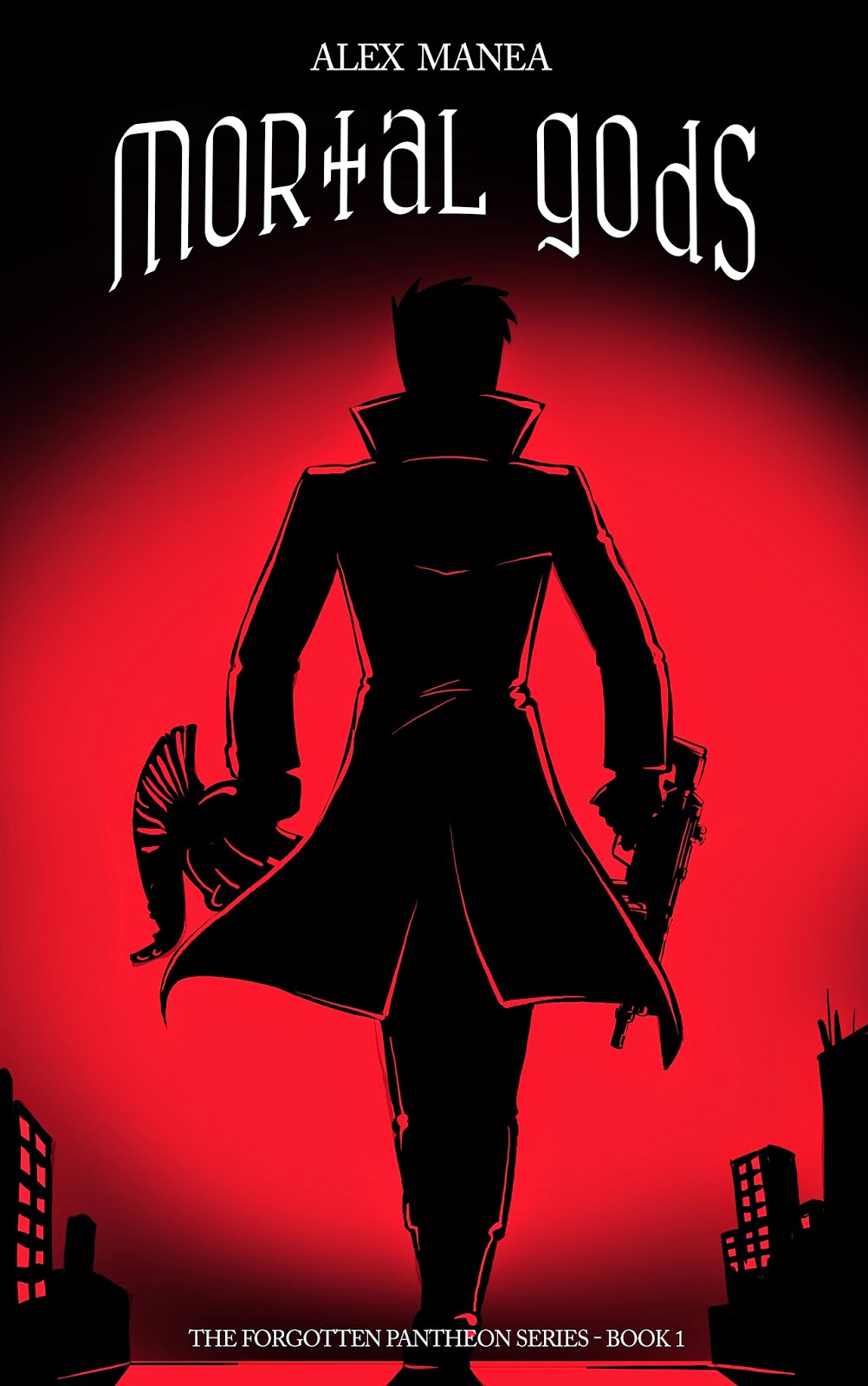 Mortal Gods
Forgotten Pantheon
Book 1
Alex Manea
Genre: Urban Fantasy
ISBN: 9781311240422
ASIN: B00N0I2Z8O
Number of pages: 183
Word Count: 45,400
Cover Artist: Ovidiu Stanciu
Book Description:
Heather, a young American girl, is visiting her college roommate, who now lives in Rome. While partying in a local nightclub, she’s picked up by a man who looks like he was created in the image of a Greek god. Her initial impression is correct.
He’s one of the last surviving members of the Greek pantheon. After hooking up with him, Heather is forced to join the culmination of a two-millennium-long war between that pantheon and a clandestine sect of monks within the Catholic Church, itself led by perhaps the most infamous figure in Christian history.
Heather and Apollo embark on a world-spanning effort to collect what remains of the gods to engage in the final battle with the monks opposing them. But the fate of the battle is changed by the intervention of a mysterious military organization…
Available at  Amazon   BN   Kobo 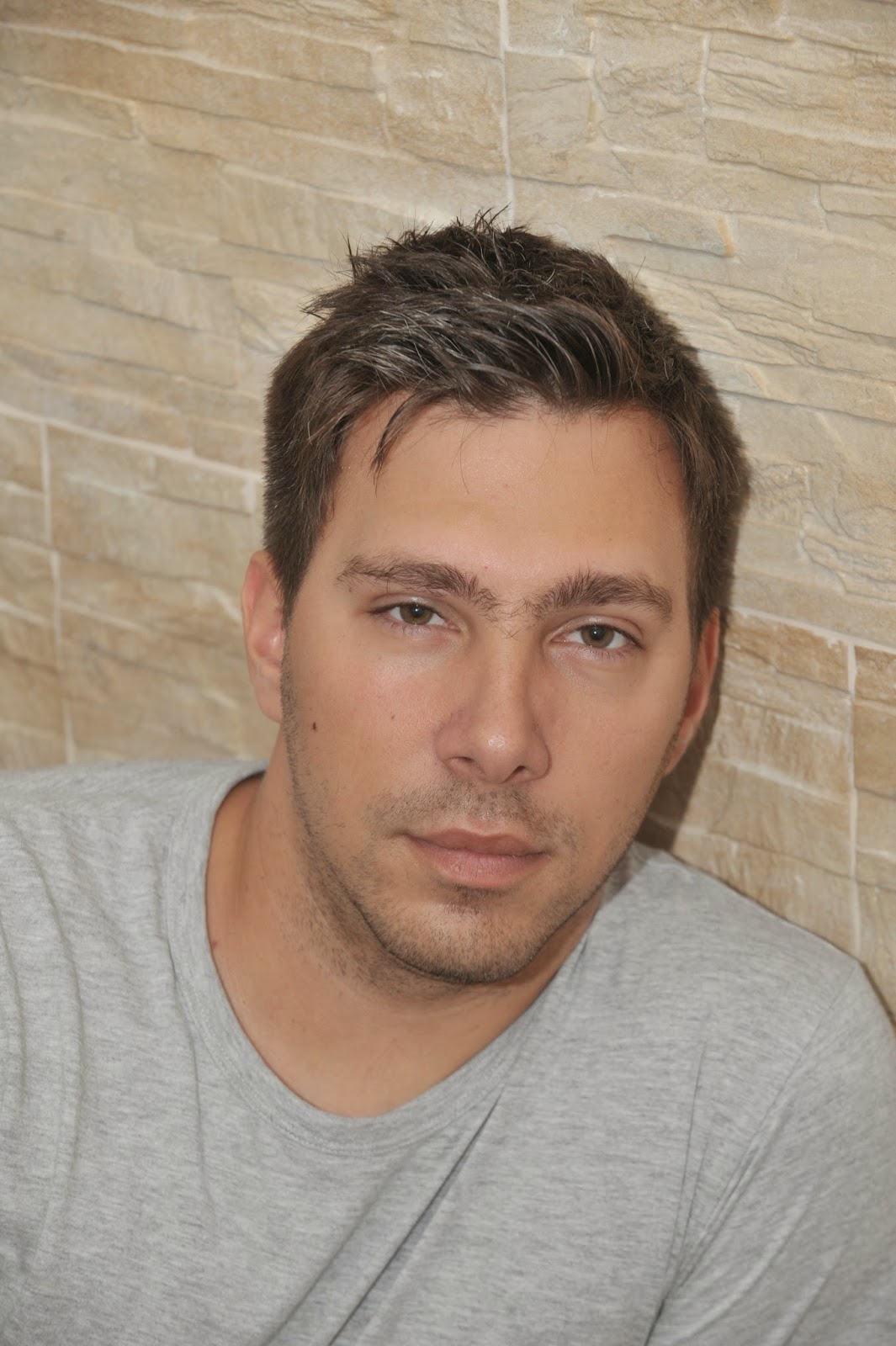 About the Author:
Alex Manea is a Romanian journalist and writer, author of the Urban Fantasy novel Mortal Gods, the first book of the Forgotten Pantheon series. Alex is a big mythology buff, especially Greek, this being the source of inspiration behind the novel. Alex is currently working on the second novel of the series.
Web: http://forgottenpantheon.com/
Facebook: https://www.facebook.com/pages/Alex-Manea/712543075478967
Twitter: https://twitter.com/authormanea