When they left the restaurant, Jin took him downtown to go shopping.

Rory stopped outside the store and raised his eyebrows at the name.

“Armani? Isn’t that last season or some shit?”

Jin chuckled and stepped inside. “The label is all certain people care

about. The tux should work for your sister’s wedding as well.”

Rory forced himself not to glower and followed.

wondered if these three women spent all their income on designer clothes.

What a ridiculous waste of money. They pulled out three tuxedos, which all

looked the same to Rory, but the sales vultures insisted they were different in

“Do I have to try all three of them on?” Rory asked and shoved his

hands into his pockets. Too bad his bartender getup wouldn’t pass at a fancy

“Yes. I want my money’s worth, and you’re the best model I can think

of,” Jin said with a delectable smirk and headed toward the fitting rooms.

Heat flared in Rory’s chest, torn between annoyance and lust. Why did

Jin always fall right on that line? This weird place

between wanting and wanting to punch.

He stalked after the dragon.

“You’re coming in with me?” Rory asked as he walked into one of the

palatial dressing rooms. It was the same size as his bedroom and had a damn

couch, for fuck’s sake. Yeah, it wasn’t anything like the dressing rooms at the

Jin stepped inside after him. “I wouldn’t want you getting lonely in here

Rory doubted that eventuality, but he didn’t kick Jin out either. “And here

I didn’t put on my fancy underwear.”

A sales woman brought in the tuxedos and shut the door as she left.

A dare lit up Jin’s eyes as he settled on the couch.

What did he expect? That Rory wouldn’t actually strip? He slipped the

leather jacket off his shoulders and set it aside. “You want to watch me take

“Very much. You’re an attractive man. I can see what Richard loves

about you, but I can’t see what you liked about him,” Jin said evenly.

Rory yanked his shirt over his head and tossed it on his jacket. Then he

Jin’s eyes crinkled at the edges, and Rory wondered how old the dragon

was. Older than Rory.

Jin’s dark eyes drank in Rory’s firm chest, the tattoos that wound over

his arms and taut pectorals, and the little black rings that pierced his nipples.

But Jin didn’t reach forward and touch him, like Rory assumed he would. Hell,

over his lips, Rory expected a hell of a lot more.

“I said you were attractive,” Jin purred.

“So take off my pants,” Rory said and moved so close his legs straddled

Jin’s thighs. Perfect position for a suck job, and he smirked at that thought. If

the sex was on his terms, he sure as hell wouldn’t mind.

“Is this how I earn my kiss?” Jin asked and leaned forward.

“Maybe,” Rory said. How the hell did this go from a power play to

flirting? Fuck. He didn’t know. The heat building in his balls told him not to

They flicked and pulled, ever so carefully, at the rings on Rory’s nipples.

Rory bit back a groan.

Jin smiled and roamed lower. His fingers caught on the top of Rory’s

jeans, and he undid the top button. His dark eyes burned as he grabbed the

zipper, and eased it down like this was all some great big act of seduction.

It twitched and stiffened, and Rory fought the urge to thrust his hips into those

“You want me to keep going?” Jin asked.

The dare still burned in his eyes, but something else flickered alongside

it. The same flame that burned inside Rory – the thing that urged him closer

and closer to the edge between what was safe and what was possible.

He didn’t trust himself to speak, so Rory nodded instead.

Jin complied. He hooked his thumbs in the side of the jeans and inched

them lower and lower. They slid over Rory’s black jockeys, down his legs and

bunched there. He forgot about the boots. Well, since Jin was in the

“Those too,” Rory said, his voice gruff.

“Oh, you’re going to pay for this later,” Jin said with a dangerous smirk.

Rory returned it with one of his own. “Sure thing.”

Jin made quick work of the laces, and Rory stepped out of the boots

and jeans with a minimal amount of hopping. The jockey’s hung so low on his

hips the dark red curls popped out of the waistband, but he didn’t bother

It gave the dragon a good look at what Rory had in store for him.

“Do I have to dress you too or can you manage?” Jin asked, his voice

rich with amusement. A spark shone in his eyes.

“I think I can manage,” Rory said and picked up the first tux.

He put on the pants, shirt and jacket without a problem, but the bowtie

was another issue altogether. However, one of the sales women came in and

righted it for him. Then there was a whole lot of ‘turn left’ and ‘turn right’ before

he finally got to put on the other two.

Even looking at himself in the mirror, Rory couldn’t see the difference.

He chose the first one out of spite, and Jin didn’t argue with that decision.

“I’ll box this up for you sir. And I’ll set out some suitable shoes. Size

“Yeah,” Rory said and waited for her to shut the door before he looked

Jin’s eyes lingered on Rory’s bulge. “Do I get to take that off too?”

“Maybe after the gala,” Rory said and tossed the shirt at the dragon.

Jin caught it and stood up in one swift movement.

Right. Shifter. They were fast – faster than he was.

Rory barely registered that thought as Jin’s body met his, pressed him

against the wall and took a long, slow sniff of his neck.

Rory’s heart jumped into his throat, and his cock responded to the

sudden proximity. “Do I?”

most certainly do. And I want my kiss. I think I’ve earned it.”

The cuff on Rory’s wrist felt heavier than normal, thick and tight. If he

said ‘no,’ maybe Jin would have to stop. He’d need to back off until the

situation was all on Rory’s terms. But Rory couldn’t find the words. They

bunched up in his throat and came out as a groan.

Jin sucked at Rory’s skin and fire rose across his flesh with it.

“Earned it? Not quite,” Rory whispered. “Get me off, and I’ll consider it.”

Jin’s fingers dug into his shoulders, and he smiled against Rory’s flesh.

“You’re going to pay for that too.”

Rory didn’t see how that could be a bad thing. 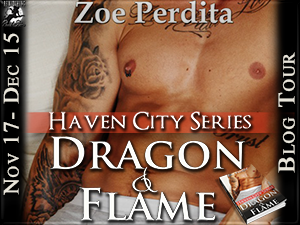 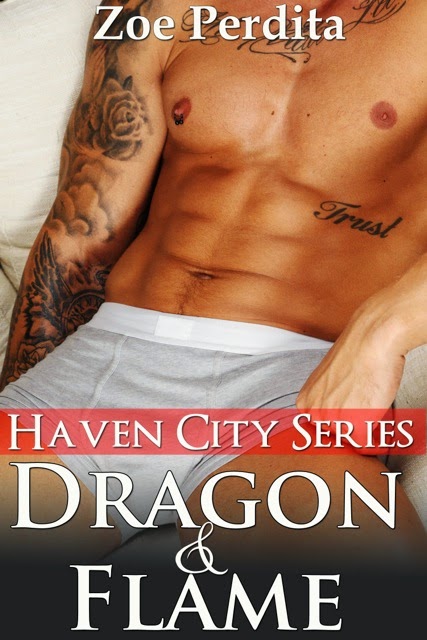 Dragon and Flame
Haven City Series
Book 6
Zoe Perdita
Genre: Gay romance, shifter romance
Publisher: Eccentric Erotica
Date of Publication: Sept. 29, 2014
ISBN: 1502525526
ASIN: B00O0GS1PG
Number of pages: 260 in print
Word Count: 62,000
Cover Artist: Zoe Perdita
Book Description:
Rory Sullivan thinks he has it all, until his boyfriend breaks his heart and the new landlord raises the rent on his bar. A chance meeting with Jin Yue, a rich dragon, gives Rory hope. Jin promises Rory he can save the bar and get even with his ex – for a price.
All Rory has to do is pretend to be in a relationship with Jin. Rory’s bad boy nature, and the desire for some no-strings-attached sex make the idea way too intriguing. Even if Rory’s brain thinks it’s a bad idea, his cock heartily disagrees.
Problem is, Jin Yue might be all kinds of hot, but he’s also Haven City’s one and only crime boss – sexy, powerful and deadly. Now Rory is tied to Jin until the dragon’s mission is complete, regardless of assassination attempts, hunters or the cops.
Jin Yue won the gang war, but the battle for Haven City isn’t over.
Enter Rory Sullivan – the tatted up fire mage who can help Jin lay claim to his rightful territory. However, things don’t turn out the way Jin plans. Rory pushes all the right buttons and riles up Jin’s dragon instincts. The fire mage is the farthest thing from Jin’s type, but the heat between them sets Jin’s blood on fire.
They’re playing a dangerous game that puts both of their hearts and lives on the line. While the passion between Jin and Rory sizzles, can a relationship built on deceit grow into something more?
Warning: contains violence and graphic gay sex scenes.
Available at Amazon  BN   ARe  Google Play 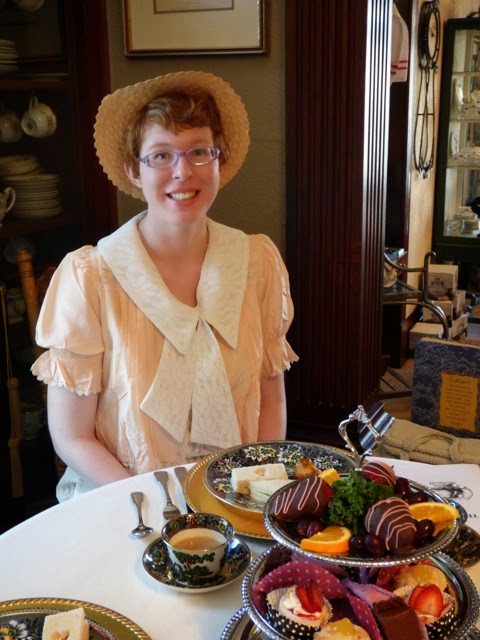 About the Author:
Zoe Perdita writes gay shifter romance because the only thing better than one hot shifter dude is two hot shifter dudes making out.
She lives in the Pacific Northwest with a fluffy orange cat and a lively roommate. When she’s not writing, Zoe likes to travel, read and play video games.
Blog: http://www.zoeperdita.com/
Twitter: https://twitter.com/ZoePerdita
Facebook: https://www.facebook.com/zoe.perdita
Goodreads: https://www.goodreads.com/author/show/5877921.Zoe_Perdita

Die Top-Online-Shop für viagra – average dose of cialis. Niedrige Preise und hohe Qualität! Beyond a certain point, Viagra will no longer be present in your bloodstream or cialis 81 In my opinion, if all webmasters and bloggers made good cialis viagra cheap content as you did, the net will be much more useful than ever before.