For the first time ever, Dora Machado’s entire Stonewiser series is available in a free Kindle Giveaway, including the complete award-winning trilogy, Stonewiser: the Heart of the Stone, Stonewiser: The Call of the Stone and Stonewiser: The Lament of the Stone.
Read the series from cover to cover.
Download the three books for Free for five days only
Aug 31- Sept 2 and Sept 6-7
Book One    Book Two   Book Three
The blitz starts on August 22
The Kindle FREE giveaway begins on  Saturday Aug 31th through Monday, Sept 2. Then again Sept 6-7. 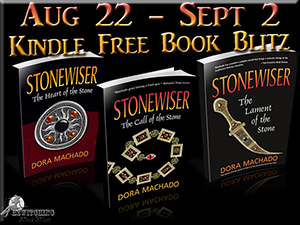 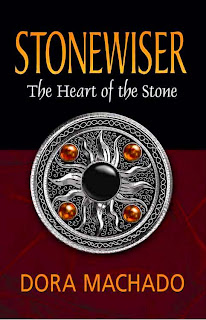 Stonewiser: The Heart of the Stone
Book 1
Genre: Fantasy, Epic Fantasy,
Romantic Fantasy,
Fantasy Romance, Dark Fantasy
Publisher: Mermaid Press
ISBN: 978-0979968204
ASIN: B001F7ATEO
Amazon
Book Description:
Winner of the 2009 Benjamin Franklin Award for best Debut Novel
Finalist for 2009 Foreword Book of the Year Award for SFF
Between truth and deception, between justice and abuse, a stonewiser stands alone with the stones. Or so begins the stonewiser’s oath. But what happens when a rebellious stonewiser discovers that lies have tainted the stone tales?
In a world devastated by the rot’s widespread destruction, only the tales preserved in the stones can uphold the truth and defend the Goodlands. In this world, stone truth is valued above anyone’s word, and stonewisers are the only ones capable of retrieving the tales from the stones, the only link between past and present, order and chaos.
Sariah is the most gifted stonewiser of her generation, but her talent does not atone for her shortcomings. A survivor of the Guild’s brutal training, she is curious, willful and disobedient. Yet not even Sariah is prepared for what she finds when she steals into the Guild’s Sacred Vaults: A mayhem of lies and intrigues that shatters her world.
Hunted, persecuted, and betrayed, Sariah must make an unlikely alliance with Kael, a cynical rebel leader pledged to a mysterious quest of his own. The fate of their dying world depends on their courage to overcome centuries of hatred and distrust. But not even the grueling journey has prepared them for what they are about to discover. Because nothing is really as it seems, and the truth is more intricate and devastating than they ever suspected…. 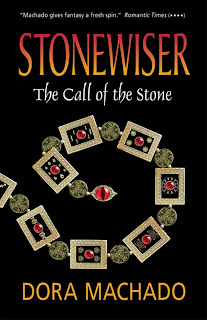 Stonewiser: The Call of the Stone
Book 2
Genre: Fantasy, Epic Fantasy, Romantic Fantasy,
Fantasy Romance, Dark Fantasy
Publisher: Mermaid Press
ISBN: 978-0979968228
ASIN: B0047DWZTU
Amazon
Book Description:
Winner of the 2010 Independent Publisher (IPPY) Gold Medal for SF/F
Finalist for the 2010 ForeWord Book of the Year Award for SF/F
Sariah’s reward for revealing the stone truth: a death sentence.
The executioners have arrived and Sariah, the most powerful and controversial stonewiser of her generation, has been judged and condemned to death. For the last few months, Sariah has been hiding in the Rotten Domain, trying to find the elusive tale capable of uniting a divided people teetering on the brink of a catastrophic war. As she is dragged to the nets, where an eel rave has been stirred to maximize her execution’s gruesome spectacle, Sariah knows she cannot escape her sentence. She is guilty of the crimes for which she’s been condemned and no one, not even Kael, the Domain’s foremost rebel leader, can save her from the executioners’ righteous justice.
But Kael is more than just a formidable warrior; he is also a cunning strategist and Sariah’s steadfast lover. Risking all he has, he bargains with the greedy executioners, bribing them into delaying Sariah’s execution, buying her precious time and a last chance to realize the mysterious legacy that the stones have imposed on her. The agreement is hardly a reprieve. It encourages a mob to hunt Sariah for ransom, banishing her from the Rotten Domain and imposing heavy fines on anyone who tries to help her. Worse, it requires her to wear an irremovable, mysterious bracelet. If she doesn’t return to the executioners with the tale in hand when the allotted time expires, Kael and his kin will be ruined and the bracelet will kill her.
Hunted by the executioners, the Guild and the Shield, Sariah and Kael embark on a desperate search. Their journey will take them to the depths of the Rotten Domain, where Sariah must wise a guiding beam out of the wild tale stored in a stone-carved game. The beam will lead them through the warring Goodlands—where the rot is on the move—to the land beyond the Bastions, where a zealous people guard an ancient stone that could hold the key to their search. Along the way, Sariah and Kael must overcome deadly traps, torture, heartbreak, agonizing defeat and devastating losses in a desperate attempt to avoid war and answer the mysterious call of the stone. 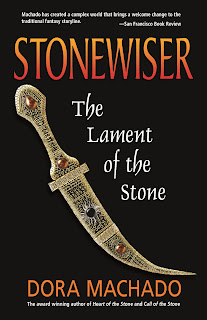 Stonewiser: The Lament of the Stone
Book 3
Genre: Fantasy, Epic Fantasy, Romantic Fantasy,
Fantasy Romance, Dark Fantasy
Publisher: Mermaid Press
ISBN: 978-0979968235
ASIN: B0051H6SUI
Amazon
Book Description:
“Do you know why the stones grieve?” the woman said to Kael. “Not for a soul, I’ll tell you that much. The stones don’t grieve for the passing of a lowly woman or the madness of a smitten man. They don’t mourn death, or lost love, or broken dreams, or loneliness or despair. Yet you will make them wail. For you, the stones will weep.”
In their most perilous adventure yet, Sariah, the rogue stonewiser who stunned the world by discovering lies in the stones and defying the all-powerful Guild, and Kael, the rebel leader who against all odds loves her, must find a stolen child, the only one capable of setting rule upon chaos, preserving the future of stonewising, and defeating the rot ravaging the land. The stakes couldn’t be higher. The coveted child they seek is said to be an abomination. He is also their son.
It’s a daunting challenge. Their child is in the hands of a deceitful enemy who has fled to a mysterious ruler, a rival deity with unfathomable powers pledged to destroy the goddess and eradicate stonewising from the world. Worse yet, the land is engulfed in strife, the rot is spreading faster than ever, and Kael is haunted by a malevolent curse compelling him to kill the woman he loves.
In a dangerous journey fraught with shocking twists, Sariah and Kael must do more than defeat their foes, unravel the mystifying forces vying to control their lives, and discover the mysteries of ages past. They must challenge the stones, defy the goddess and confront their cursed fates. Because only by embracing their destinies do they stand a chance to save their child and their world. 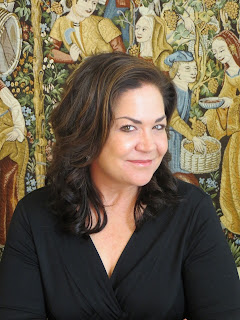