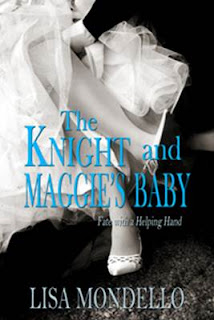 The Knight and Maggie’s Baby
By Lisa Mondello

Jonah Wallace knows what it’s like to grow up without love. Despite having more money than the Queen of England, his childhood was cold and stale as he grew up in boarding schools. He’s dedicated his life to helping homeless and displaced children find the love and support they need by creating the Haven House Foundation, work that resulted in him being Knighted by the Queen.

Now that he’s living in America, his work is going along just fine…until his grandfather gives fate a little nudge by insisting he take a wife before he can inherit.

Coffee shop owner, Maggie Bonelli, is pregnant and the baby’s dad has gone AWOL. She knows too well the pain of growing up without a daddy. So when Jonah Wallace comes into her shop proposing marriage for a year, she takes him up on his offer, even if it’s only for a year. Live in a mansion and give her baby a name and a daddy to call his/her own. But can they keep their perfect arraignment strictly business…or will fate’s helping hand bring them love at last?

The Knight and Maggie’s Baby Excerpt:

“Don’t you think you’re rushing things just a tad?” She lifted her hand and pinched her index finger and thumb together for emphasis.

“I’ll admit my proposal is a bit abrupt,” he stammered.

“We’ve only known each other–”

“Forty-five minutes tops,” she blurted out. “Are you out of your mind?”

Her tone was incredulous. And he really didn’t blame Maggie if she thought he was nuts. He felt nuts. Desperate, too. But he found himself defending his proposal.

“Quite possibly. But you see, that’s exactly my point. I have a bit of a time-crunch here, and it seems as though–”

Maggie folded her arms across her chest. “How silly of me. Here I thought you were sweeping me off my feet.”

He shook his head with a chuckle. “I do sound mad, don’t I?”

“Recognition is the first step toward recovery.”

Something rumbled up from deep inside him. Jonah laughed at himself, this disastrous day, and the absurd situation he’d been forced into by his grandfather. It felt good to laugh. That in itself was incredibly surprising, considering he hadn’t managed to do much laughing at all since he’d learned of the impending plans for Wiltshire.

He peered at Maggie through moisture filled eyes. She wasn’t laughing. But she was incredibly beautiful. Her sapphire eyes sparkled when she teased him. There were small freckles sprinkled across her nose that looked adorable with the sun shining on her creamy skin.

When she looked at him the way she was right now, it didn’t seem like such a crazy idea to marry her. At least not for the reasons he was proposing. He hadn’t given it a second thought. And yet, now he realized just how ridiculous he looked from her eyes.

“You just asked me to marry you.”

“I’m asking for your help.”

His lips tilted up to one side. “Again.”

Maggie took two steps down the stairs until they were both standing at eye level. “Forget the phone call, the nice air conditioned ride in the limo, the coffee, the pie—”

“Which by the way was truly inspiring,” he interjected. “If I didn’t already tell you that.”

“You did. You don’t even know me. You’re asking a total stranger to marry you.”

He shrugged. “I know that. But I know you make me laugh.”

“So that’s all it takes for a happy marriage? Bet we could make a killing with that book.”

“I sound delusional,” he said. “Even to my own ears, which is pretty scary.”

He was delusional. He’d just asked a woman he didn’t even know to marry him! And the fact that he was truly considering it was entirely grandfather’s doing. 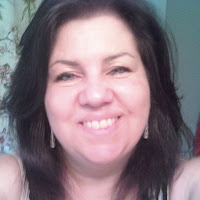 Lisa Mondello is the best selling author of 13 published books. Her first published book, the award winning ALL I WANT FOR CHRISTMAS IS YOU, was recently reissued as an ebook and has had over 226,000 downloads worldwide. In addition to publishing her Fate with a Helping Hand series, which includes THE MARRIAGE CONTRACT and THE KNIGHT AND MAGGIE’S BABY, she is releasing her popular Texas Hearts Romance series as ebooks in early 2012. She currently writes for Harlequin Love Inspired Romance and is collaborating with a film producer/screenwriter on a screenplay.

She loves to hear from readers. You can email her atLisaMondello@aol.com, find her on her blog talking about writing, movies and music at http://www.lisamondello.blogspot.com or chat on Twitter at @LisaMondello