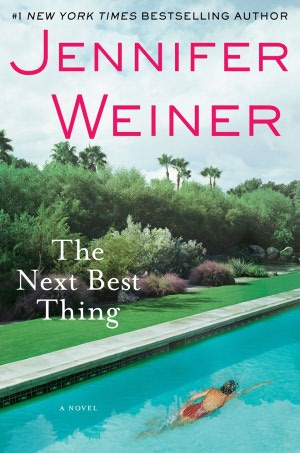 The Next Best Thing: A Novel

Actors aren’t the only ones trying to make it in Hollywood.…At twenty-three, Ruth Saunders left her childhood home in Massachusetts and headed west with her seventy-year-old grandma in tow, hoping to make it as a screenwriter. Six years later, she hits the jackpot when she gets The Call: the sitcom she wrote, The Next Best Thing, has gotten the green light, and Ruthie’s going to be the showrunner. But her dreams of Hollywood happiness are threatened by demanding actors, number-crunching executives, an unrequited crush on her boss, and her grandmother’s impending nuptials.

Set against the fascinating backdrop of Los Angeles show business culture, with an insider’s ear for writer’s room showdowns and an eye for bad backstage behavior and set politics, Jennifer Weiner’s new novel is a rollicking ride on the Hollywood roller coaster, a heartfelt story about what it’s like for a young woman to love, and lose, in the land where dreams come true.

I was very excited to read The Next Best Thing after reading Swim a short-story with the same main character, Ruth.  The background of this story is that Ruth was in a car accident as a child that killer her parents and left her with major damage.  Her grandmother moved back to Massachusetts to raise her.  After graduating both Ruthie and her grandmother move across the country chasing Ruthie’s dream of writing a television show.  After being taken in by the Dave’s Ruthie is lucky enough to have one of her shows picked up.  But what she does not expect is the compromises she is going to have to make to keep her show on the air.  The question is will she be okay with the changes or will they drive her to a different means.

Along the way Ruthie realizes that she has feeling for one of the Dave’s, he is in a wheelchair and currently involved with a beautiful woman and can get any woman he wants why would he want anything to do with her.  In the middle of the drama around her television show, she is trying to figure out her feelings and battle with her disappointments.

This was a great story with a ton of balance!  There is drama, both political in the crazy world in Hollywood and personal drama for many of the character, romance, excitement, disappointment, frustration, exhaustion and so much more.  Jennifer Wiener bring great perspective and interesting characters to life for page turning fun.  I enjoy the style and growth that is shown from Swim to The Next Best Thing.  A great story of overcoming challenges, taking risks, and making life what you want it to be.

3 thoughts on “Review: The Next Best Thing by Jennifer Weiner”