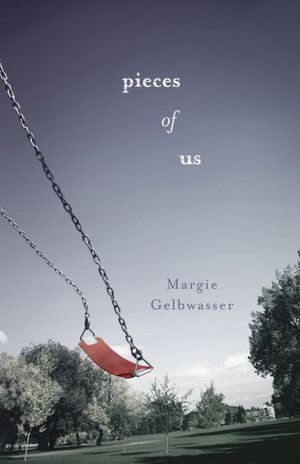 Pieces of Us by Margie Gelbwasser

Two families. Four teens. A summer full of secrets. Every summer, hidden away in a lakeside community in upstate New York, four teens leave behind their old identities . . . and escape from their turbulent lives.

But when he’s back in Philadelphia during the school year, Alex cannot suppress his anger at his father (who killed himself), his mother (whom he blames for it), and the girls who give it up too easy. His younger brother, Kyle, is angry too—at his abusive brother, and at their mother who doesn’t seem to care.

Meanwhile, in suburban New Jersey, Katie plays the role of Miss Perfect while trying to forget a horrible, life-changing event that no one knows about. But Julie, her younger sister, sees Katie only as everything she’s not. And their mother will never let Julie forget it.

Up at the lake, they can be anything, anyone. Free. But then Katie’s secret gets out, forcing each of them to face reality—before it tears them to pieces.

Pieces of Us is by no means a happy go lucky book, it is gritty, dirty and very heavy.  I applaud Margie Gelbwasser for taking on so many tough topics all in one story.  It has taken me a long time to determine just what to say in this review because it was a lot to taken in.  I would not recommend this for younger teens, this is an in your face book with a lot of sexual activity and language.  I do understand that teens face a lot in today’s world, and that being said if a younger teen was interested in the book I would ensure that I was available to talk about the topics.

The writing style was not my favorite.  The narrative changes from chapter to chapter, each written from the point of view of one of the four main characters.  I will say that each character has a very distinct point of view, with one from the second person, which I found very appropriate for a book about abuse and bullying.  One thing that I really did like about the style of this book is the fact that the heritage is taken into account and well represented but not over done or thrown in the face of the reader.

I think one of the biggest challenges I had with Pieces of Us was I had a lot of trouble connecting with the characters and understanding them.  I know that each of these character is going through growing pain and changes, however it was difficult to pin down exact where each character was in this process.  I had the hardest time with Alex, I could just not get a beat on him and I could not understand what Katie saw in him.  It was just a brutal story and a hard one to get through.