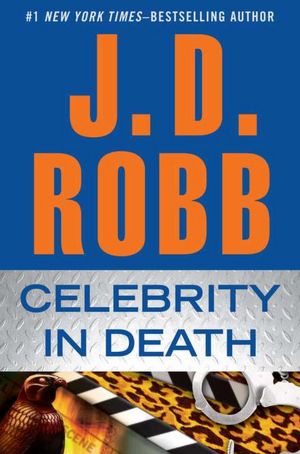 Celebrity in Death by J.D. Robb

Lieutenant Eve Dallas is no party girl, but she’s managing to have a reasonably good time at the celebrity-packed bash celebrating The Icove Agenda, a film based on one of her famous cases. It’s a little spooky seeing the actress playing her, who looks almost like her long-lost twin. Not as unsettling, though, as seeing the actress who plays Peabody drowned in the lap pool on the roof of the director’s luxury building. Now she’s at the center of a crime scene-and Eve is more than ready to get out of her high heels and strap on her holster and step into the role she was born to play: cop.

Celebrity In Death is much less emotional than New York to Dallas was.  Eve is beginning to deal with what happened though she is having very lucid dreams and Roarke is also starting to cope with the aftermath.  They are both being careful with one another so while there is interaction that is solely Roarke and Eve, it is not the main focus of this story.  For me this book got back to the nitty girtty of solving the crime, much more about the process.  There is a lot of interview time with witnesses where both Eve and Peabody’s skills are demonstrated and just solid detective work.

The big question always is who got murdered and who is Eve going to get justice for. Nadine has sold her book rights for The Icove Agenda and they are filming right in New York City.  Roarke and Eve, Peabody and McNab, Dr. Mira and her Husband, Mavis and her husband and Nadine are attending a dinner with the cast of the movie.  Eve is trying to just enjoy herself when she has words with K.T. Harris, the woman who is playing Peabody in the film.  Little is though of this as the hostess pulls  her aside and the night moves on to a gag reel showing.  After the viewing, K.T. is found dead in the rooftop pool.  Eve quickly realizes that K.T. is not liked by anyone on the cast but everyone seems to have an alibi.  Solid interview and just plain digging reveal just how much K.T. was disliked and why.  When a P.I., that K.T hired to investigate two of the other cast members and their relationship in  order for K.T. to be able to blackmail them turns up murdered as well, Eve and Peabody are at a loss as to who the murderer is until Eve discovers something outrageous.  Seven deaths of people close to one of the suspects have turned up and that just seems too convenient.

I was glad to have a break from the emotional stress of New York to Dallas.  I understand why it needed to happen but it was a rough story.  I really enjoy the evolution of relationship that the In Death Series has.  Eve and Roarke have hit a new level of their relationship with all of Eve’s past out in the open, yet things are still the same.  Roarke continues to gift Eve with things even though it makes her crazy and Eve harassed Roarke about his business.  Peabody and McNab really hit a new level when the idea of marriage is discussed.  There is not much of Mavis in this book but I hope more in the future.

All in all, this was another solid entry in the In Death series.  It is amazing that this is book #34 and I am not feeling that the series is dragging out.  There is always something new and fresh.  It keeps me coming back.

4 Penguin, not perfect but a solid book.  I will be back for more.

Previous books in this series

One thought on “Review: Celebrity In Death by J.D. Robb”