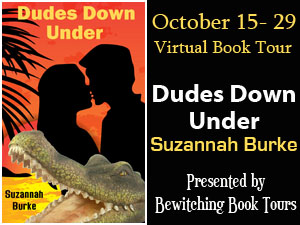 Are YOU addicted to the Bad Boys of fiction?

In the real world I find myself attracted to confident men who are unafraid to expose their tender side…but…in fiction..uh-uh…the bad boys win hands down.

I have been spending long hours reading whilst recovering from pneumonia and those books lead me to conclude that I am indeed addicted to the BAD boys of fiction.

These were not all Romance novels either my friends, not that I ever apologise for reading those. I enjoy a well written book regardless of genre.

I found myself drawn to the Bad Asses. The tough guys with few redeeming features except perhaps for their love of animals and kids. No really…I gave this a lot of thought and attempted to analyse why they draw me to them. Why not the Good guys? The decent, long suffering, visit their mom’s once a week types…Why did they leave me with only a vague memory of their character? Why can’t I recall a single memorable line of dialogue.

With the exception of Ryan O’Neal’s dreadful one liner in “Love Story” way back when…”Love means never having to say you’re sorry” which has been parodied to death I can barely recall the good guys in recent novels.

So okay…join me here if you will.

My earliest remembered Bad Ass was way back in my early teens when I found a much read copy of “Gone With The Wind” at the library.

Yeah, you guessed it, I fell for the wonderful Margaret Mitchell’s characterisation of Rhett Butler. This guy made no apologies for who he was or what he stood for. I sooo wanted Scarlett to wake up to her stupid self and love this man. Why? Because he was just that…a man. He had faults, a temper, a reckless disregard for the correctness of life and he loved that spoilt woman senseless. No matter what. But he did it without becoming wishy washy and walked upon. Clarke Gable’s portrayal of Rhett Butler certainly added to my happy memory of that character.

Which brings me to Ashley Hamilton…eeek! He drove me nutso.

I have room in my reader’s heart for gentle men…providing that their gentleness is tempered with a backbone that doesn’t bend at the first sign of a woman’s displeasure.

Are we genetically predisposed to find the aggressive male hunter attractive? The provider, protector… “Rocky” on steroids!

The male role has changed inexorably over the years, with the advent of women’s liberation and a world more forgiving of a man’s tender side. Yet time after time I look at the back cover blurb of a work and find an almost formulaic sketch of the central male figure, you know the ones I mean. Like this—

“Could she put (Insert name) out of her mind and her heart? (Insert name) made her ache like no man had ever done. He was wild and at times reckless, yet, he thrilled her. And what of (Insert good guys name) he had waited so long for her to realise that (Insert Name of Bad Ass Guy) was not the man she thought he was.

It only took a chance meeting for (Insert female name) to understand that no matter what (Insert Bad Ass name)did, what he kept hidden from her; she loved him beyond reason…etc etc etc.

You know the type.

So … I decided to read a couple of novels that purported to be thriller/mystery/crime/psychological etc genres; and guess what I found?

Yup…The hero, the central, pivotal, alpha male character was deep, mysterious…a loner with a past imperfect, a hint of tenderness blended with the ability to do whatever it took to save the day, the woman, the town.

In conclusion I guess I’m asking you…are YOU addicted to the bad boys of fiction? Do you prefer the gentle long-suffering good guys…or do you like Mr Sexy but remote? Mr “don’t pin me down”.

I will cover the “bad girls” of fiction, those naughty, tough as nails, tender-hearted, femme fatales that the male readers hunger after in my next post.

I look forward to reading your comments. 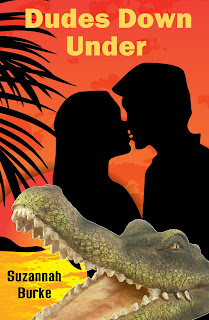 Dudes Down Under
Dudes Series Book One

Dudes Down Under, the most luxurious resort ever built. It sits on a privately owned Island on the Great Barrier Reef, off the northernmost region of Australia.

No cell-phones, no computers, no paparrazi.

The world’s most famous talk show hostess and the owner of the island sign a deal, the result; Hollywood’s ‘A’ listers all vying for a chance to be the first guests.

They pay half a million dollars for the privilege of being randomly chosen from a barrel of names on her programme.

The young hotel heiress with a habit of driving whilst drunk and little else to commend her.  Blend in a couple of famous expatriate actors

Add the tower owning king of power with an unfortunate hairstyle and attitude.

The television hostess and her film crew.

Add to the mixture:

The most politically incorrect bunch of Australian staff you are likely to meet, anywhere.

Cyril, who has impeccable dress sense, adores Al Pacino and Marlon Brando, drinks to excess, and has a fascinating attitude about well—everything! Well … yes–he is a Crocodile, but he’s family.

Blend the ingredients carefully then stand well back!

‘Dudes Down Under’ is waiting for you to arrive. 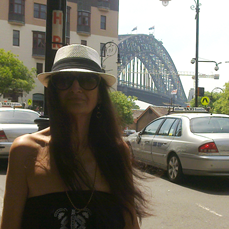 Authors are meant to enjoy talking about themselves, right? Wrong! It is so difficult to blow your own trumpet without sounding big-headed or apologetic or both at once … “I do apologize for sounding big-headed.” You get my drift? I can do this straight up or in my normal (Occasionally) manner.

So here we go…I have had the privilege of having 3 books published by Taylor Street Publishing. Books one and two are biographical and written under my pen name of Stacey Danson. ‘Empty Chairs’ and its sequel ‘Faint Echoes of Laughter’ have been well received and for that I will always be so very grateful. They are difficult books to read, dealing as they do with the explosive topic of Child abuse in its most horrific of forms. When I was writing Empty Chairs I badly needed a release of some sort; somewhere I could focus my mind apart from the memories I had to relive. ‘Dudes Down Under’ is the result.

The book is Romantic and dare I say it very funny in an over the top, off the wall, ‘what the hell did she just say?’ way. The characters I loved writing. They became my friends. They gave me an avenue to explore strong women, vulnerable men, and love with all its faults and foibles. They also allowed me to explore comedic writing to its fullest extent.

Reviewers tell me they cried laughing at the comedy … and at times simply cried. I have a sequel (Dudes Does Hollywood) in the planning stages.

I have also recently completed a psychological thriller…phew! Challenges are something I never avoid. Only time will tell if my exploration of different genres will be successful.