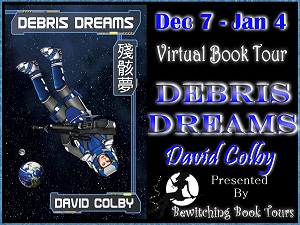 I am watching Star Trek while I type this. Since I wrote an entire novel about space, laser guns, and being in space with laser guns, you might think that I really like Star Trek. You’d be wrong. For all of the good things Star Trek has managed to accomplish, it has consistently failed on three accounts.

Firstly, it has failed as a progressive depiction of gender relations. The original series couldn’t go half an episode without insulting women, the “Next Generation” had its only two female characters be a caregiver and an incompetent psychologist wearing a skintight catsuit and NOT a uniform despite being a Lt. Commander, and the latest show – Enterprise – had its two female characters be an abject coward and…you guessed it, another woman in a catsuit.

Secondly, it has failed as a progressive depiction of sexual relations. In this accepting future, Star Trek has exactly ZERO transgendered individuals, bisexuals, homosexuals, or asexuals. There are ONLY straight people in the future, according to Star Trek.

And thirdly, Star Trek has consistently failed to have good science. If you have seen the show, you might be aware of “techno-babble.” For those who haven’t seen it, imagine a string of nonsense technological-sounding words strung together in a fashion that makes no sense. But if the main characters can state this sequence of words in the right fashion, then the problem they face will go away.

That is why, after I had done up pages on pages of calculations for my novel, I spent equal amounts of time thinking about the characters.

Only time will tell if I actually managed it. 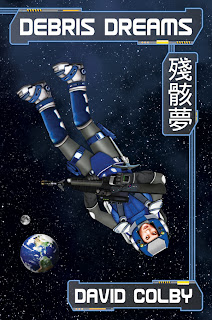 Debris Dreams
David Colby
Genre: YA science fiction
Publisher: Candlemark & Gleam
ISBN: 978-1-936460-38-0
Number of pages: 294
Cover Artist: Karen Gadient, www.karengadient.com
Book Trailer: http://youtu.be/CJnnk8jX2g8
Book Description:
2068
1.5 million kilometers above the surface of the Earth
Drusilla Xao has only seen a tree in movies and vid-games. She has never breathed air that wasn’t recycled, re-filtered, and re-used a hundred times over again. She has never set foot on the Earth.
And now she never will.
When a terrorist attack by a radical separatist group on Luna destroys the space elevator that had called so many – including her parents – to live permanently in space, Dru is cut off from any hope of ever reaching Earth and her beloved girlfriend, Sarah. The Chinese-American Alliance declares immediate war on the rebels and conscripts everyone they can get their hands on…including Dru.
Cast adrift, forced to become a soldier, trapped in a nightmare of vacuum and loneliness, Dru’s training will help her survive, but only Sarah will be able to bring her home.
Author Bio:
Heavily influenced by George Romero movies and bad, poorly dubbed anime, David Colby decided to start writing almost twelve years ago. It went poorly. But, despite these early setbacks, David continued to work and write and send out submissions until someone was mad enough to accept him. Currently living in Rohnert Park, California, while working on his English Bachelor, David Colby continues to be fascinated by George Romero movies and has realized that animes have subtitles.
http://debrisdreams.candlemarkandgleam.com
http://quantumspinplates.com
Twitter: @therealzoombie
Goodreads: http://www.goodreads.com/author/show/6439863.David_Colby
Book Character Twitters:
@druofnight
@cayerbear22
@caa_news

Its appropriate time to make some plans for the long run and it is time to be happy. I have read this post viagra morte attività sessuale and if I may I want to counsel you some interesting things or advice. Then, our site is unavailable in your country where to get viagra locally right now. Ahaa, its good dialogue concerning this piece of writing here at this weblog, I have read all that, so at this time me also commenting