There are a lot of paranormal books out and I admit that I’ve read a lot of them. I like to read contemporary stories but paranormal or fantasy books appeal even more to me. From the sheer amount of books dealing with paranormal topics I take it that I’m not alone…

Now, m/m romance is a sub-genre anyway, so why did I chose to write a story that’s a niche in a niche? To be honest, that question only came up when I started reading some other blogs about m/m books.

Like I’ve mentioned above, I’ve always had a thing for paranormal books, and especially for stories in which the humans get to shift into an animal form. It fascinates me to no end! Do these shape-shifters have special communities? Do they always know they can shift or does it come as a surprise? How do they deal with their special abilities? How much of the typically associated animal behavior shows in the human’s personality? I could go on forever!

In A Purrfect Match Jim Sanders is a large, gray house-cat. Tony, Andrew’s son, confesses a lot of his secrets and worries to him, something he wouldn’t have done if Jim had been in his human form. Even Andrew talks freely to Jim as “Mr. Frosty”, which helps to push their relationship forward. Jim, Andrew and Tony bond on several levels, uniting them to a family.

Would they have become a family without Jim sometimes appearing on Andrew’s porch as “Mr. Frosty”? Nope, I don’t think so. The dynamic would have been very different. Jim’s shape-shifter abilities also allowed for some funny and warm-hearted moments. I really loved to write this story and hope readers will enjoy reading it. 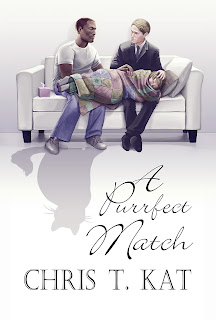 A Purrfect Match
Chris T. Kat
Genre: m/m romance, paranormal (shape-shifter)
Publisher: Dreamspinner Press
ISBN: 9781623802356
Number of pages: 236
Word Count: 66,000
Cover Artist: Shobana Appavu
Book Description:
When a bad day at work culminates in losing out on a promotion, Jim Sanders shifts into his animal form to let off steam. Then his bad day turns into a bad night—while prowling his Atlantic City neighborhood as a large gray house cat, he’s caught in a torrential downpour. What little luck he has washes down the gutter when his new boss, Andrew Wright, catches him taking shelter on his porch, brings him inside, and starts calling him Mr. Frosty.
As a feline, Jim becomes the inadvertent confessor for his boss’s lonely son, Tony, a victim of schoolyard bullying. As a human, he feels drawn to Andrew, a man he wanted to resent. Finding love was never part of Jim’s plan for the future—not with his bizarre secret—yet suddenly he finds himself navigating that minefield anyway. But not everything is easy, especially for an interracial gay couple dealing with prejudice in the workplace, at Tony’s school, and even within their own families. 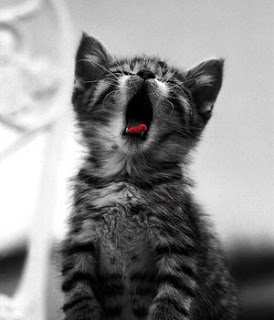 Author Bio:
Chris T. Kat lives in the middle of Europe, where she shares a house with her husband of almost 15 years and their two children. She stumbled upon the M/M genre by luck and was swiftly drawn into it. She divides her time between work, her family—which includes chasing after escaping horses and lugging around huge instruments such as a harp—and writing. She enjoys a variety of genres, such as mystery/suspense, paranormal, and romance. If there’s any spare time, she happily reads for hours, listens to audiobooks, or crafts.
Blog: http://christikat.blogspot.com or http://christikat.livejournal.com
Twitter: http://twitter.com/christi_kat
Goodreads: http://www.goodreads.com/ChrisTKat
GLBT bookshelf: http://bookworld.editme.com/ChrisTKat