I was delighted when my writer friend, Beck, came to call again (http://www.becksherman.com/2012/04/bram-stoker-reviews-revamp.html) and brought along that wonderment of modern technology. To see the iPad once more filled me with such pleasure, I was afraid I might burst. We seated ourselves atop the gravestones, I, on my friend Marvin’s and Beck on Griselda’s. Initial formalities concluded, Beck asked me if I would pose several questions about writing Revamp, and I obliged. The iPad was handed to me and the light of the full moon above suffered in comparison to the sweet light emanating from that odd, flat fruit. By God, how far man has come!

But without further ado, here is my conversation with Beck Sherman, transcribed for you on the modern marvel, the Apple iPad.

Stoker: “Beck, do tell me, have you ever read Dracula?”

Sherman: “Yes, of course. I loved it, which is why I sought you out. You’re a literary legend.”

Stoker: “Why, then, may I ask, did you give it only four stars? The internet revealed to me this truth, and to my knowledge, five stars is the best.”

Sherman: “No, you’re right, Mr. Stoker. Five stars is the highest rating, but four stars is still very, very good. I’ve actually only given five-star ratings to a few books—”

Sherman: “Um, offhand, I’m not sure I can recall—”

Sherman: “Okay, um…I think The Shining by Stephen King was one.”

Sherman: “Oh, no. He’s not actually a king. He’s just a regular guy who wrote, and is still writing, some really amazing horror books.”

Stoker: “Does he have travel and cargo and letters in his novels? Dracula has these things and is better for it.”

Sherman: “He does in some of them, yeah. So…I had a couple sample questions for you to ask me, just there—”

Sherman: “But, Mr. Stoker, where are you going? And why are you still typing?”

Stoker: “I’m transcribing. Recording everything is very important. Remember, my friend, that knowledge is stronger than memory.”

Sherman: “Van Helsing said that. To Dr. Seward, right? Listen, I really hate for us to part like this.”

Sherman: “Mr. Stoker, you can’t keep showing up on people’s doorsteps and scaring them into doing what you want. First Dacre, now Stephen King. Life doesn’t work like that.”

Stoker: “I’m not alive, I’m dead. Death works like that, my friend.”

Sherman: “You won’t be able to scare Stephen King into not writing! He’ll never stop writing!”

Stoker: “The best of luck with your book, young Sherman!”

Sherman: “Mr. Stoker? Are you still there? Mr. Stoker, I need my iPad back!” 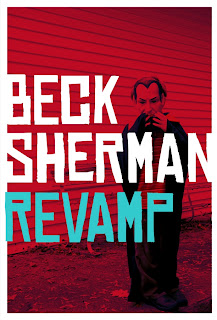 Revamp
By Beck Sherman
Genre: Horror
Publisher:
ISBN: 9780985732707
ASIN: B007Q4LK9I
Number of pages: 439
Word Count: approx. 162,024
FOR THREE DAYS, IT WAS DARK.
News reporters scrambled. This was the biggest story to come along in weeks.
They called it a blackout.
The last one was in New York City in 2003, but this one was different, special, because the grids in six major cities across the country had been fried, kaput, see-you-next-Sunday. Everyone with some jurisdiction blamed each other, and when there was no one left to blame, terrorism rode in on its gallant steed.
It was the media’s fault. They were so busy stuffing fanatical Muslims with a penchant for Allah and decapitations down the American citizen’s throat, that they never saw it coming. I guess I shouldn’t be too hard on them.
They were partially right.
It was terror after all, but a whole new kind. And when the lights came back on, things had changed.

The dark had brought us visitors.

Book Trailer http://www.youtube.com/watch?v=CA6GEtgc0yY
Smashwords       Amazon           BN
Author Bio:
Beck Sherman was born and raised in Massachusetts, studied undergrad at Syracuse University, has a master’s degree in photojournalism from the University of Westminster, London, and when not writing, enjoys exploring abandoned insane asylums and photo-documenting the things that go bump in the night, when they’re kind enough to pose.