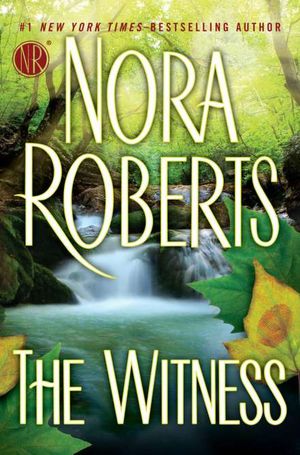 The Witness by Nora Roberts

Daughter of a controlling mother, Elizabeth finally let loose one night, drinking at a nightclub and allowing a strange man’s seductive Russian accent lure her to a house on Lake Shore Drive. The events that followed changed her life forever.

Twelve years later, the woman known as Abigail Lowery lives on the outskirts of a small town in the Ozarks. A freelance programmer, she designs sophisticated security  systems—and supplements her own security with a fierce dog and an assortment of firearms. She keeps to herself, saying little, revealing nothing. But Abigail’s reserve only intrigues police chief Brooks Gleason. Her logical mind, her secretive nature, and her unromantic viewpoints leave him fascinated but frustrated. He suspects that Abigail needs protection from something—and that her elaborate defenses hide a story that must be revealed.

With a quirky, unforgettable heroine and a pulse-pounding plotline, Nora Roberts presents a riveting new read that cements her place as today’s most reliably entertaining thriller author—and will leave people hungering for more.

I have been a long time Nora Roberts fan and I have read all of the books she has written under Nora Roberts and J.D. Robb. This book was by far the best that I have read from her in years.  It was not written in the same pattern that I have become accustomed to where I can almost tell you exactly what is going to happen and in what order.  This was different and refreshing.

The story actually starts with a young girl who is controlled completely by a mother that expects her to be perfect and follow all of her rules and expectations.  She is just turning sixteen years old and is already in college, her whole future laid out for her.  And like most teenagers she rebels.  Elizabeth finds herself in the mall and has not idea what she is supposed to do there.  She is quickly recognized by  another teen that she attended school with for a short period of time and gets wrapped up in this girl’s plan to have Elizabeth create them fake ids and go out to the hottest club in town.  Even after Elizabeth does some research and finds that this club is owned by men known to be affiliated with the Russian Mob, she is too high on her new found freedom and goes along.  Elizabeth has changed her appearance by cutting and dying her hair and dressing in a completely new way.  Once at the club, the girls are meet and are invited back to one of the owner’s homes.  Liz, as she decided to go by, quick realizes she has had to much to drink and after getting sick curls up on a chair out on deck in the fresh air.  She wakes up to a conversation in Russian, and since she has a mild understanding quickly realizes that something is terribly wrong.  She witnesses the man they came home with shot by another member of the Russian mob and her new friend shot at point blank range.  Liz takes off and calls the police.  The police quickly move her to a safe location but Liz quickly realizes that she will never be safe and they will always hunt her especially once her safe house is compromised and everyone who has taken care of her is killed on her birthday, and the blame is placed on her.  Liz disappears.

Flash forward twelve years.  Brooks Gleason has returned to his small hometown after spending ten years in the big city fighting crime to be the chief of police and be closer to his family after his father suffers some medical set backs.  Small towns come with their own set of problem and in his small town it is the rich couple and their trouble making son and gossip.  There is a lot of gossip about the new woman on the outskirts of town, Abigail Lowery, who runs her own business creating security systems and has a dog that scares just about everyone.  Brooks decides that he is going to stop by and is surprised at how quickly he is attracted to this strange woman who is always armed and has a dog that seems to know commands in many different languages and is completely in tune to his owner.  Brooks can tell that she is in some kind of trouble but just can’t get her to talk about it.

Abigail knows that she needs to be on her own to stay safe but Brooks Gleason just keeps getting in her way.  And more frustrating than that is she enjoys the time they spend together and has even learned that she enjoys spending time with his family since they have a way of ensuring that she will show up, but she can never give away her secret and she must take the Russian mob family has had her on the run for all of these years down and she is getting so close.  She has begun to get information into the FBI and has create a computer program that will eliminate the mob’s money so they cannot just return to power.  But she is letting Brooks get to close and it could ruin everything.

Little does Abigail know, Brooks could be the answer to all of the unfinished plans and there is a possibility that she could live happily ever after even if it means that she has to put her life on the life to take down the people that have run her life for so many years.

First, I love all of the high drama and mystery in this book!  It was so unpredictable and emotional.  For awhile now, the normal Nora Roberts book has been all about the romance, that is not the case in this story.  While yes, it is there and in your face at points during the story.  The real story is that of young Elizabeth, the journey that takes her to being LIz, Abigail and being faced with having to be Elizabeth again even though she knows that the Russian mob is going to find a way to kill her once she agrees to testify and close the mystery of what really happened.

Outstanding character and story development.  I hope to see more stories in a similar vain to this one from Nora Roberts in the future.  I love a good solid romance and her series always provide that but I love this new directions.

I highly recommend this story!

5 thoughts on “Early Review: The Witness by Nora Roberts”