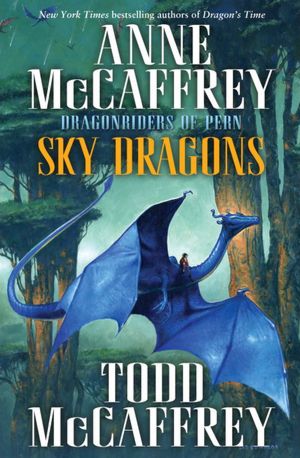 From the New York Times bestselling mother-and-son team of Anne McCaffrey and Todd McCaffrey comes the final installment in the riveting Pern saga that began with Todd’s solo novel, Dragonsblood. Now, with all of Pern imperiled by the aftereffects of a plague that killed scores of dragons and left the planet helpless against the fall of deadly Thread, the only hope for the future lies in the past.

There, on an unexplored island, a group of dragonriders led by Xhinna, a brave young woman who rides the blue dragon Tazith, must battle lethal Merows and voracious tunnel-snakes to build a safe home for themselves and the dragons, whose offspring will one day—if they survive—replenish Pern’s decimated dragon population. But as the first female rider of a blue dragon, and the first female Weyrleader in the history of Pern, Xhinna faces an uphill battle in winning the respect and loyalty of her peers . . . especially after an unforeseen tragedy leaves the struggling colony reeling from a shattering loss.

Amid the grieving, one girl, Jirana, blessed—or cursed—with the ability to foresee potential futures, will help Xhinna find a way forward. The answer lies in time . . . or, rather, in timing it:the awesome ability of the dragons to travel through time itself. But that power comes with risks, and by venturing further into the past, Xhinna may be jeopardizing the very future she has sworn to save.

Xhinna, rider of blue Tazith, has found herself three Turns in the past and responsible for the future of Pern.  In her own time, a plague has devastated the dragon population, leaving to few alive to fight Thread.  In a desparate attempt to repopulate the wyers, Xhinna and several others have used the unique dravonic ability to travel back in time to give the few surviving hatchlings a chance to mature before the Red Star returns, and Thread with it.  A vicious feline attack has left Tazith as the only mature dragon capable of flight.  Xhinna must now find a way to feed, shelter and protect the humans and dragons in her care.  As the first female rider of a blue dragon, her successes and failures are judged more harshly than if she had been a male rider.  When help, in the form of more riders and mature dragons, arrives from the present time, Xhinna tries to relinquish her authority.  But she finds that too many others rely on her.  In addition to her responsibility as a leader, Xhinna must also deal with the emotional conflict she experiences as her lover, Talia, becomes involved with some of the male riders.  Will Xhinna be able to save Pern?

I found this book to be one of the more emotionally touching in the Dragonriders of Pern series.  Each book seems to be better than the previous.  Sky Dragons is the final book in the current storyline. Readers new to the series would be better off starting with either Dragonflight, the first in the world of Pern, or Dragon’s Kin, the first in this particular storyline.  Long time fans of the series will not be disappointed with Sky Dragons.

With the passing of Anne McCaffery last year, Todd and his sister, Georgeanne Kennedy, are the only two authorized to write in the world of Pern.  I hope Todd continues to write, as I have found his books to be just as good as those written by Anne.  In the author’s note to Dragon’s Time, Anne mentioned she was working on After the Fall Is Over, the conclusion to the story of F’lar and Lessa.  I am hoping that Todd knows enough of the story to be able to finish it, but I have not yet heard anything about it.  Fingers crossed.

Another reason some people prefer Sildenafil, compared to Levitra or dove e come comprare il cialis 10 Myths About erectile dysfunction You Must Stop Believing donde conseguir viagra bookmarked!!, I really like your гѓђг‚¤г‚ўг‚°гѓ©гЂЂ100mg!