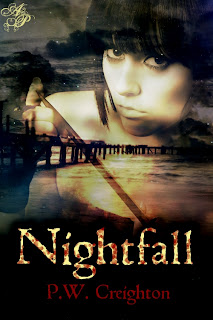 Nightfall
By PW Creighton
Blurb:
Three years after everyone important to Connor Maitland was murdered by a fanatical cult he is still attempting to put his life back together. Accompanied by his ex-girlfriend and business partner, Alison Herne, he is making a living as a jack-of-all-trades running a security company, sailing charters, and even photographing weddings out of Dolliber Cove, Massachusetts. Connor’s world is finally coming back together until they find one of Alison’s ghost hunter friends murdered.
When a childhood love he thought was dead, appears on his doorstep during their investigation, Connor is forced to confront memories he convinced himself were the delusions of a man deep into grief. They are being stalked by a mysterious man who appears to know far too many of their secrets. After Alison is almost killed confronting her occult past, it is impossible for Connor to deny the connection between the cases. Someone is attempting to end Connor’s life and the lives of all those who surround him.
The crazed rantings of the murderous cult may be the key to his survival. 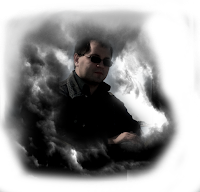 Author Bio:
Author of the Psychological, Supernatural Thriller Series Nightfall, Writer, adventurer, archaeologist, photographer, videographer, Tech-Geek, Investigator
Originally from California, PW moved frequently, living in many places including Vermont, Tennessee and currently New York where PW took his interest in adventure to college earning a Bachelors in Folklore Anthropology, Archaeology and Art Studio. After his work was displayed in gallery exhibits and television documentaries, he returned to college for his MSEd as a Communications Specialist in Media Production. Between rock climbing, sailing and investigations, there’s barely enough time in the day but it’s all a modern adventure.
Social Media Links:
www.facebook.com/AuthorPW
www.twitter.com/RavenRequiem13
www.pwcreighton.com

“Maitland, this is Tabitha. I know you’re not really into this stuff, but I think you might want to make an exception this time. Well, I’m out by Rockport off Old Cathedral with Camilla and Don, and I think we’ve got something for you. It’s…wait— What are—” The voice stopped. “End of new messages. If you would like to listen to your messages, press One.” An electronic beep sounded and the voicemail started again.

The taste of wet concrete and a throbbing headache made me roll onto my back and open my eyes to a dark mass overhead. It was too dark to make out anything more than vague shapes without a flashlight.

“Ow.” I managed to sit up while the wireless headset continued to repeat the voicemail in my right ear. A few feet away, my flashlight blinked at a stack of wet pallets. I reached across the concrete to retrieve the flashlight and twisted the end to get a steady beam. A quick survey of my surroundings revealed a number of pallet stacks, the red metal pipe-‐‑railing I had just hopped over, a pile of heavy rope tangled around my feet, and a low‑hanging pulley block. This is why they say you should not be fussing with your cell phone when you investigate a potentially dangerous environment.

“Crap.” I scanned the floor for my lousy phone and found it lying with its touchscreen against the corner of a pallet. I shut off the voicemail and wiped off the grime to tuck it into my gray pea coat.

I forced myself to my feet only to stagger and lean on the nearest stack of pallets. Between the weather and that pulley, I would need a heavy dose of aspirin. I shook my head to clear my mind, but the phone screamed for attention. I groaned and hit the button on my headset.

“Everything is all set for you tonight,” a woman announced from the other end with a touch of nervousness. Her again.

“All right. We’ll check into that and then hit the place this weekend.” I swept the light across the stacks of pallets. Through one of the dirty skylights, I saw a flash of lightning. Can’t the weather ever cooperate?

“I can’t thank you enough.” Her voice trembled.

“Right, see you then.” I tapped the headset and rubbed my temple. The woman had been nothing but trouble since I had agreed to help her. I was not in the mood to deal with anyone indecisive enough to keep rescheduling a project because they were terrified by what I might find. When a client is constantly rescheduling a site analysis, it means one of two things: either they couldn’t afford the work or they were afraid I might find something illegal. Either way, the job had eaten up my time and my patience. I had more important issues than a simple security analysis.

I walked around a stack of pallets, stooped down and checked the strange scratch marks in the concrete floor. I focused my light on the corroded tin-‐‑and-‐‑ wood wall ahead of me. Various bundles of rope and rusted tools hung from the exposed wall supports. Using the flashlight, I followed a taut rope to a large rowboat suspended from the rafters. Everything was damp and reeked of stale seawater. I followed the path between the stacks of pallets and stepped around the odd tool in my path. The winds rushed the structure; the walls creaked as waves crashed outside. I rounded another stack of pallets and spotted the doorway to the office. It didn’t bode well.

As I approached, my light revealed the remains of a modified digital camcorder still attached to a tripod. I knelt down to check the camera only to find that even the hard drive was smashed to bits. Completely unsalvageable. I stepped past the remains and pushed open the worn, blue door. The office was in no better shape.

The office had not been used in years, but on the far side of the room were a couple of open cases of electronics. A battery-‐powered lantern flickered on the floor and illuminated the destruction with a pale fluorescence. Clumps of old tools covered the walls, and boxes left only a narrow path to a stack of old desks under a fenced window. Pages from a spilled file folder were strewn about the floor with various electronics.

It doesn’t take a professional investigator to recognize a crime scene, but a professional knows what to look for without compromising the scene. I craned my neck to look at the top of the equipment case that had been knocked on the floor. RPS. It was Tabitha’s, all right, but where were they?

I tried to spot anything that screamed out what could have happened with their investigation. Amateur investigators are prone to panic when they take on the wrong case, but professionals like Tabitha wouldn’t just abandon thousands of dollars worth of electronics. Mixed in with the equipment were a number of ritual tools for protection that included a silver dagger, several bundles of incense, and candles. What had they attempted to protect against? I pulled out my camera and snapped a couple of pictures of the scene before I switched to video.

I shut off the camera and moved through the partially open exterior door. The winds rushed me and rippled my coat. The fresh air felt good but also unsteady with the storm that approached. Waves sloshed against the wharf on both sides under a thin mist. In the distance I could just make out a figure on the beach, rapidly moving away.

One thought on “Book Spotlight: Nightfall by P.W. Creighton”