At first, I thought that this was going to be a really tough question but then a book came immediately to mind so here it is: Piper’s Fury by Rachel Firasek. 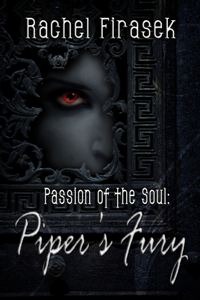 Using your “powers” to help the Dark Hills Police Department hunt down serial killers doesn’t leave much time for dating. Not that Piper Anast is complaining. The last thing she needs is some guy brushing up against her and pumping his pornographic thoughts into her head.
When she meets Bennett Slade, a sexy, tormented vampire, Piper stumbles headlong into a telepathic connection with his missing daughter. She can’t leave the kid to the evil surrounding her unwanted visions, nor can she resist her draw to Slade. He’s the first guy she’s been able to touch vision-free in, well, forever.
As she and Slade close in on the evil creature holding his daughter, Piper’s powers morph into a deadly fury. To save Slade’s daughter-and herself-Piper must face down demons she never knew she had and trust the one thing she keeps from everyone.

Sounds pretty amazing doesn’t it?!?  Well it really is.  These are some of the most addiciting characters I have ever written.  I talked about this book so much when I read it that my husband decided that even though this is not his typical genre he needed to read it and he even like it a lot and recommended it to people.  So don’t just take my word for it check out what others had to say:

“ I was so into this book that I just had to know what was going to happen next. ”

“Rachel Firasek masterfully creates a dark world full of intrigue, passion, and suspense in which she incorporates a tough and snarky heroine with a kind-hearted, hot, alpha-male vampire. “

“ Her character is very well developed and the plot flowed perfectly. ”

You can check out my review, the Amazon Page, the Goodreads Page, and Rachel Firasek’s Page.

And then the online reviews these have to mean something great: I hope you will check out this book for yourself.

Now what books do you have to share with me?  Hope you will leave them in the comments

6 thoughts on “BBAW: You Need to Read This!”