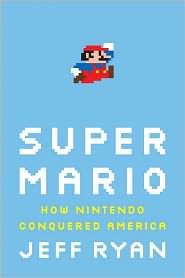 Synopsis:
The story of Nintendo’s rise and the beloved icon who made it possible.

Nintendo has continually set the standard for video-game innovation in America, starting in 1981 with a plucky hero who jumped over barrels to save a girl from an ape.

The saga of Mario, the portly plumber who became the most successful franchise in the history of gaming, has plot twists worthy of a video game. Jeff Ryan shares the story of how this quintessentially Japanese company found success in the American market. Lawsuits, Hollywood, die- hard fans, and face-offs with Sony and Microsoft are all part of the drama.

• Mario’s eccentric yet brilliant creator, Shigeru Miyamoto, who was tapped for the job because was considered expendable.

• Minoru Arakawa, the son-in-law of Nintendo’s imperious president, who bumbled his way to success.
• The unexpected approach that allowed Nintendo to reinvent itself as the gaming system for the non-gamer, especially now with the Wii Even those who can’t tell a Koopa from a Goomba will find this a fascinating story of striving, comeuppance, and redemption.

The Super Mario Bros. franchise is by far the most popular video game franchise with over 240 million games sold. So how did Nintendo, originally a trading card company, create a best-selling game about a plumber? In this book, the author, Jeff Ryan, walks the reader through each stage of Nintendo’s development of Mario, from arcade games to the Wii console. He talks about the decisions made by Nintendo while creating each new game, and how competing companies responded.

As an avid video gamer, I found this to be an interesting and fun read. There are lots of “Wow! Really?”, facts about the video game industry. The writing is clear and easy to read. There’s very little techno-babble or corporate legal discussion that would put off a casual reader. The only problem I had with this book is that the other seems to be too big a fan of Nintendo and readily put down other companies. While I understand that he wouldn’t have written the book if he was a fan, I was looking for a bit more impartiality.

Overall, a good read that highlights not only the video game industry, but says a lot about what people, as a culture, look for in our entertainment.

3 Penguins – would give 3.5 if there were half a penguin

One thought on “Review: Super Mario: How Nintendo Conquered America by Jeff Martin”