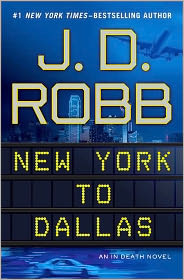 The new novel from the #1 New York Times-bestselling author, which takes readers deeper into the mind of Eve Dallas than ever before.

The number-one New York Times-bestselling author J. D. Robb presents an intense and terrifying new case for New York homicide cop Eve Dallas, one that will take her all the way to the city that gave her her name-and plunge her into the nightmares of her childhood.

When a monster named Isaac McQueen-taken down by Eve back in her uniform days-escapes from Rikers, he has two things in mind. One is to pick up where he left off, abducting young victims and leaving them scarred in both mind and body. The other is to get revenge on the woman who stopped him all those years ago.

I have enjoyed the In Death Series by J.D. Robb from the very first book.  I get sucked into the crimes and the lives of Roarke and Eve and all of the others and don’t want to leave their unique future with all of its fun gadgets and sometimes luxuries.   New York to Dallas meet and exceeded all of my expectations.

First, a bit about the story itself.  This story brings Eve back to her first big case with the NYPD.  Isaac McQueen has been in jail for years but kills an officer and escapes.  He immediately breaks into his old apartment and get word to Eve that he is out and he is after revenge for being put in jail.  Not only this but he is going to get Eve back to Dallas, the town that gave her the name Dallas and made her what she is today, but this means that Eve will be forced to face her worst nightmares.  McQueen takes captive the only of his victims who faced him in jail and it is up to Eve and this girl’s sister who was a previous victim as well to save her life.  Eve is faced with things in this book that I never saw coming.  I am not going to share what but you must read this book to find out what startling discovery she makes in the middle of trying to save this young woman.  It makes the nightmare even harder for Eve to face. As always, J.D. Robb provides a solid story, well thought out plot and an excellent ending.

The relationships are always interesting from book to book in this series.  As always there is a love/hate relationship with Summerset, which always makes me chuckle.  The same is true for Eve and Roarke, I really enjoy watching their relationship grow and change.  It is a pleasure to see them as a couple.  The most strikingly different relationship for me in New York to Dallas is that of Peabody and Dallas.  It seems that Dallas has realized that Peabody is growing up in her career and that it might be time to let her go out on her own.  The interactions between them have changes and I found it very interesting and  I have to wonder where it is going next.

This is one series that I never get tired of there is always something new and interesting.  I am always look forward to the next book and this is no exception.  I have a feeling that more change is in the air, but I just don’t know what it might be.  Maybe it has to do with the fact that this is the first book in this series that does not include “In Death” in the title.  I don’t know what it might be but something leads me in this direction.  I guess I will just have to wait and see but waiting is really hard.

5 Penguins!  A great story and lived up to my every expectation!

The Other Boos In This Series:

The In Death Series

2 thoughts on “Review: New York to Dallas by J.D. Robb”