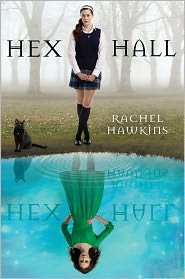 Three years ago, Sophie Mercer discovered that she was a witch. It’s gotten her into a few scrapes. Her non-gifted mother has been as supportive as possible, consulting Sophie’s estranged father—an elusive European warlock—only when necessary. But when Sophie attracts too much human attention for a prom-night spell gone horribly wrong, it’s her dad who decides her punishment: exile to Hex Hall, an isolated reform school for wayward Prodigium, a.k.a. witches, faeries, and shapeshifters.

By the end of her first day among fellow freak-teens, Sophie has quite a scorecard: three powerful enemies who look like supermodels, a futile crush on a gorgeous warlock, a creepy tagalong ghost, and a new roommate who happens to be the most hated person and only vampire on campus. Worse, Sophie soon learns that a mysterious predator has been attacking students, and her only friend is the number-one suspect.

As a series of blood-curdling mysteries starts to converge, Sophie prepares for the biggest threat of all: an ancient secret society determined to destroy all Prodigium, especially her.

Rachel Hawkins created a story that is something that almost every teen can relate too and that is being different and not really understanding who you are and where you fit.  I really enjoyed the fact that the spell Sophie cast to arrive at Hex Hall was really one that she thought was going to help someone and make her fit in some place, not easy for a witch to do. After moving around so much, one might think that Sophie would be happy to be in one place but yet again she just doesn’t fit in. It is here at Hex Hall that she finally learns who her father really is and that only makes her even more different than the other students.  Not only is she a black witch but her father is the head of the Council, that sentenced every student to this school until they are eighteen, including Sophie’s roommate, who is even more of an outcast because she is a vampire.  The other black witches try to get Sophie to join their coven, but she wants nothing to do with it.  When Sophie finds one of these girls almost dead, all fingers point to her new roommate.  Sophie is determined to clear her friend.  Sophie is going to learn a lot more than she excepts before she solves this mystery and might get her heart broken along the way.

For me, this book started a bit slow but then it picked right up and I could not put it down.  I can remember times when I was a teen that I felt just like Sophie so it was very interesting for me to see how she was going to work some of her issues out and how she would handle the truth about what she really is.  Rachel Hawkins did a wonderful job with creating a story that plays with your emotions and keep you guessing from chapter to chapter.  My favorite single scene in Hex Hall  was when Sophie is trying to use magic to make her All Hallows dress and it keeps turning out horrible .  It made me laugh out loud.

4 Penguins.  I wish I was using half ratings though as it would be 4.5.  The only real reason why is that the story started slow for me.  That doesn’t mean it will be the same for you so check it out!