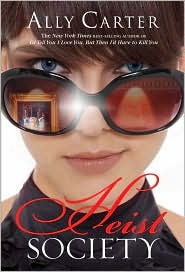 When Katarina Bishop was three, her parents took her to the Louvre…to case it. For her seventh birthday, Katarina and her Uncle Eddie traveled to Austria…to steal the crown jewels. When Kat turned fifteen, she planned a con of her own—scamming her way into the best boarding school in the country, determined to leave the family business behind. Unfortunately, leaving “the life” for a normal life proves harder than she’d expected.

Soon, Kat’s friend and former co-conspirator, Hale, appears out of nowhere to bring her back into the world she tried so hard to escape. But he has good reason: a powerful mobster’s art collection has been stolen, and he wants it returned. Only a master thief could have pulled this job, and Kat’s father isn’t juston the suspect list, he is the list. Caught between Interpol and a far more deadly enemy, Kat’s dad needs her help.

For Kat there is only one solution: track down the paintings and steal them back. So what if it’s a spectacularly impossible job? She’s got two weeks, a teenage crew, and hopefully just enough talent to pull off the biggest heist in her family’s (very crooked) history—and, with any luck, steal her life back along the way.

I had heard a lot of great things about this series so I probably had really high expectations when it came to Heist Society.  The storyline itself was well thought out and had no gaps or questions left hanging.  I found all of the heists and history in this book to be amazing well put together.  I like that Kat had to rely on the people she left behind to now help her father get out of the trouble that he was in.  In premises, the heist reminded me a lot of The Thomas Crowne Affair.  I think that this was one things that really drew me into the book and made me not put it down.  This was one that I read in one sitting.  I just had to know how they were going to pull it off or if they were.

I felt like Kat and Hale were extremely well developed and I had a great understanding of their background and how they had gotten to where they were.  On the flip side of that, I felt like some of the secondary character could have been better developed.  I wanted to know more about them and why they were in Kat’s life to the point that she would trust them with this.

Ally Carter’s writing style is clean and well organized.  There were many well executed surprised in the story line that seemed to just pop out of no where but the characters responded in record time and I found this to be great!  Overall, I enjoyed the story and am looking forward to reading book #2 in the near future.  It also made me think a lot about what it must be like to grow up in such a crazy crooked family.

Well thought out and executed

A book that I could not put down!