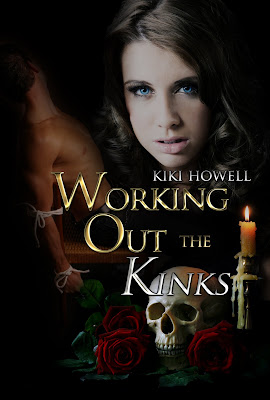 Making an appointment with his ex-girlfriend under a fake name, David buys himself one hour to get her attention. Hoping to apologize and remind her of their time together, he intends to do whatever he has to in order to make Meredith, a practicing Wiccan, forgive him for being idiot enough to have listened to those around him which meant choosing his political aspirations over love.

These are the songs Meredith listened to on her way to work the day her ex, David, showed up on her massage table. It was quiet an eclectic mix of break-up songs she had on her iPod: from angry to over you, from sad and slow to heavy metal, from oldies to new, they all struck a chord in her broken heart. Give them a listen and you will see why she would have a hard time letting him back into her life. Then read, Working Out The Kinks, to find out what exactly David has planned to win her back.

Working Out The Kinks EXCERPT:

“Your last client is in your massage room.” The receptionist tilted her head toward Meredith, giving a wry smile but then grimacing as she looked away.

“Thanks.” Meredith sighed, rolling her eyes as she rapped her knuckles on the door to announce her arrival.

What was that about? Taking a deep breath, she swept into the room. One more massage, and I can soak my tired muscles in a hot bath at home.

“Hello,” she said to the body on her table while grabbing a bottle of oil.

She stopped short of turning back around. Cologne assaulted her. The potent mix of patchouli and musk with a hint of oak reminded her of the man who’d left her heart bruised and battered. Meredith blinked hard as if she could shut down her mind before some blissful memory could wallop another punch.

The client shifted on the table. “Hey, Mere.”

Swinging around like a moth drawn to a buzzing light, air whooshed from her lungs moments before the oil bottle hit the floor. “David?”

“Yes. Gave a false name when booking the appointment.  Now, I have your undivided attention for the next hour.”

She stepped back in defiance of her need to rush into his arms and retrieved the plastic bottle instead. “Why?”

“Because we need to talk. Here, this way, you can’t walk away.  I’ve already paid for my time.”

“Paying is easy for you.”

“You can begin the massage now. The clock is ticking,” he stated in a business-like tone.

Meredith sucked half her top lip into her mouth and bit down, every muscle in her face tight to avoid her unexplainable need to smile. David was tapping his wrist where his watch should be just as he’d done to her a hundred times before to get her moving. With a confident half-grin, he laid back down.

“Really? You want me to touch you?” She hadn’t quite meant for the thought to come out of her mouth, but she felt as if someone was pressing her to death.

With each step toward her ex-boyfriend, another stone was added to the imaginary board across her chest which had her laboring for breath.

But, he already tried me as a witch.

The idea of that, her conviction and thus banishment from his life, spurred her forward. Thoughts of getting even, of squeezing a sore muscle too tightly, loomed like a silver lining around a storm cloud.

Stop it! You’d never. Concentrate! Meredith reviewed the steps to a full body massage like she was back in school.  Use sensitivity when making first contact with your client’s body. Her hands floated above his skin.  The heat of his energy challenged her fingers, and she willed each tensed-to-the-point-of-shaking finger into a semi-state of relaxation as they moved an inch above the sculpted latissimus dorsi muscles of his back. Naming each superficial layer, she hoped would keep her on task.

“I miss you, Mere.” David’s voice was muffled from the table.

Blinking against the sting in her eyes, she lingered over his skin. The thought of her palms meeting with his flesh tightened her center, and her need warred with the nervous way her stomach rolled. Meredith wanted the rush of blissful sensuality despite the threat of emotional damage which slithered over her skin, a cold reptile squeezing the life from her already broken heart.

A tear slipped from her eye. Ripples of water down her cheeks had become commonplace this last month being separated from him. These tears came as no surprise, and neither did the warm anger bubbling up to the surface.

“What difference does it make?” she clipped, answering both his question and her reluctance to give in to the pleasure of stroking her hands over his skin.  What remained hidden from her view under the strip of the white towel over his butt was crystal clear in her mind.

2 thoughts on “Release Day: Working Out the Kinks”